Jean Renoir (French: [ʁənwaʁ]; 15 September 1894 – 12 February 1979) was a French film director, screenwriter, actor, producer and author. As a film director and actor, he made more than forty films from the silent era to the end of the 1960s. His films Grand Illusion (1937) and The Rules of the Game (1939) are often cited by critics as among the greatest films ever made. He was ranked by the BFI's Sight & Sound poll of critics in 2002 as the fourth greatest director of all time.[1] Among numerous honors accrued during his lifetime, he received a Lifetime Achievement Academy Award in 1975 for his contribution to the motion picture industry. Renoir was the son of the painter Pierre-Auguste Renoir. 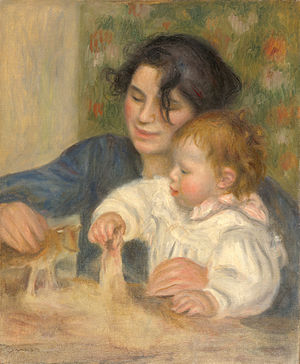 The young Renoir with Gabrielle Renard in a painting by his father Pierre-Auguste Renoir.

Renoir was born in the Montmartre district of Paris, France. He was the second son of Aline (née Charigot) Renoir and Pierre-Auguste Renoir, the renowned painter. His elder brother was Pierre Renoir, a French stage and film actor, and his younger brother Claude Renoir (1901–1969) had a brief minor career in the film industry, mostly assisting on a few of Jean's films.[2] Renoir was also the uncle of Claude Renoir (1913–1993), the son of Pierre, a cinematographer who worked with Jean Renoir on several of his films.

Renoir was largely raised by Gabrielle Renard, his nanny and his mother's cousin, with whom he developed a strong bond. Shortly before his birth, she had come to live with the Renoir family.[3] She introduced the young boy to the Guignol puppet shows in Montmartre, which influenced his later film career. He wrote in his 1974 memoirs My Life and My Films, "She taught me to see the face behind the mask and the fraud behind the flourishes. She taught me to detest the cliché."[4] Gabrielle was also fascinated by the new motion-picture invention, and when Renoir was only a few years old she took him to see his first film.

As a child, Renoir moved to the south of France with his family. He and the rest of the Renoir family were the subjects of many of his father's paintings. His father's financial success ensured that the young Renoir was educated at fashionable boarding schools, from which, as he later wrote, he frequently ran away.[5]

At the outbreak of World War I, Renoir was serving in the French cavalry. Later, after receiving a bullet in his leg, he served as a reconnaissance pilot.[6] His leg injury left him with a permanent limp, but allowed him to discover the cinema, as he recuperated by watching films with his leg elevated; seeing the works of Charlie Chaplin, D. W. Griffith and others.[7][8] After the war, Renoir followed his father's suggestion and tried his hand at making ceramics, but he soon set that aside to make films. He was particularly inspired by Erich von Stroheim's work.[9][10]

In 1924, Renoir directed Une Vie Sans Joie or Catherine, the first of his nine silent films, most of which starred his first wife, Catherine Hessling. She was also his father's last model.[11] At this stage, his films did not produce a return. Renoir gradually sold paintings inherited from his father to finance them.[12]

International success in the 1930s

During the 1930s Renoir enjoyed great success as a filmmaker. In 1931 he directed his first sound films, On purge bébé (Baby's Laxative)[13] and La Chienne (The Bitch).[14] The following year he made Boudu Saved From Drowning (Boudu sauvé des eaux), a farcical sendup of the pretensions of a middle-class bookseller and his family, who meet with comic, and ultimately disastrous, results when they attempt to reform a vagrant played by Michel Simon.[15]

By the middle of the decade, Renoir was associated with the Popular Front. Several of his films, such as The Crime of Monsieur Lange (Le Crime de Monsieur Lange, 1935), Life Belongs to Us (1936) and La Marseillaise (1938), reflect the movement's politics.[16][17]

In 1937 he made what became one of his best-known films, La Grande Illusion, starring Erich von Stroheim and Jean Gabin. A film on the theme of brotherhood, relating a series of escape attempts by French POWs during World War I, it was enormously successful. It was banned in Germany, and later in Italy, after having won the "Best Artistic Ensemble" award at the Venice Film Festival.[18] It was the first foreign language film to receive a nomination for the Academy Award for Best Picture.

He followed it with The Human Beast (La Bête Humaine) (1938), a film noir tragedy based on the novel by Émile Zola and starring Simone Simon and Jean Gabin, this also was a cinematic success.[19]

In 1939, able to co-finance his own films,[20] Renoir made The Rules of the Game (La Règle du Jeu), a satire on contemporary French society with an ensemble cast.[21] Renoir played the character Octave, who acts as a sort of master of ceremonies in the film.[22] The film was his greatest commercial failure,[23] met with derision by Parisian audiences at its premiere. He extensively reedited the work, but without success.[24]

A few weeks after the outbreak of World War II, the film was banned by the government. The ban was lifted briefly in 1940, but after the fall of France that June, it was banned again.[25] Subsequently the original negative of the film was destroyed in an Allied bombing raid.[25] It was not until the 1950s that French film enthusiasts Jean Gaborit and Jacques Durand, with Renoir's cooperation, reconstructed a near-complete print of the film.[26][27] Since screenings and reappraisals since the 1960s, The Rules of the Game has frequently appeared near the top of critics' polls of the best films ever made.[28][29]

A week after the disastrous premiere of The Rules of the Game in July 1939, Renoir went to Rome with Karl Koch and Dido Freire, subsequently his second wife, to work on the script for a film version of Tosca.[30][31] He abandoned the project to return to France in August 1939, and make himself available for military service.[32] At the age of 45, he became a lieutenant in the French Army Film Service. He was sent back to Italy, to teach film at the Centro Sperimentale di Cinematografia in Rome, and resume work on Tosca.[30][33][34] The French government hoped this cultural exchange would help maintain friendly relations with Italy, which had not yet entered the war.[30][33][35] As war approached, however, Renoir returned to France.[36][37] After Germany invaded France in May 1940, he fled to the United States with Dido Freire.[38][39]

In Hollywood, Renoir had difficulty finding projects that suited him.[40] His first American film, Swamp Water (1941), was a drama starring Dana Andrews and Walter Brennan. In 1943, he co-produced and directed an anti-Nazi film set in France, This Land Is Mine, starring Maureen O'Hara and Charles Laughton.[41][42] Two years later, he made The Southerner, a film about Texas sharecroppers that is often regarded as his best American film. He was nominated for an Academy Award for Directing for this work.[43][44][45]

In 1945 he made Diary of a Chambermaid, an adaptation of the Octave Mirbeau novel, Le Journal d'une femme de chambre, starring Paulette Goddard and Burgess Meredith.[46][47] His The Woman on the Beach (1947), starring Joan Bennett and Robert Ryan, was heavily reshot and reedited after it fared poorly among preview audiences in California.[48] Both films were poorly received; they were the last films Renoir made in America.[49][50][51] At this time, Renoir became a naturalized citizen of the United States.[52]

In 1949 Renoir traveled to India and made The River, his first color film.[53] Based on the novel of the same name by Rumer Godden, the film is both a meditation on human beings' relationship with nature and a coming of age story of three young girls in colonial India.[54] The film won the International Prize at the Venice Film Festival in 1951.[55]

After returning to work in Europe, Renoir made a trilogy of Technicolor musical comedies on the subjects of theater, politics and commerce: Le Carrosse d'or (The Golden Coach) (1953) with Anna Magnani; French Cancan (1954) with Jean Gabin and María Félix; and Eléna et les hommes (Elena and Her Men, 1956) with Ingrid Bergman and Jean Marais.[56] During the same period Renoir produced Clifford Odets' play The Big Knife in Paris. He also wrote his own play, Orvet, and produced it in Paris featuring Leslie Caron.[57][58]

In 1959 Renoir made his next films with techniques adapted from live television.[59] Le Déjeuner sur l'herbe (Picnic on the Grass), starring Paul Meurisse and Catherine Rouvel, was filmed on the grounds of Pierre-Auguste Renoir's home in Cagnes-sur-Mer, and Le Testament du docteur Cordelier (The Testament of Doctor Cordelier), starring Jean-Louis Barrault, was made in the streets of Paris and its suburbs.[60][61]

In 1962 Renoir made what was to be his penultimate film, Le Caporal épinglé (The Elusive Corporal) with Jean-Pierre Cassel and Claude Brasseur.[62] Set among French POWs during their internment in labor camps by the Nazis during World War II, the film explores the twin human needs for freedom, on the one hand, and emotional and economic security, on the other.[63][64]

In 1962, Renoir published a loving memoir of his father, Renoir, My Father, in which he described the profound influence his father had on him and his work.[65] As funds for his film projects were becoming harder to obtain, Renoir continued to write screenplays for income. He published a novel, The Notebooks of Captain Georges, in 1966.[66][67] Captain Georges is the nostalgic account of a wealthy young man's sentimental education and love for a peasant girl, a theme also explored earlier in his films Diary of a Chambermaid and Picnic on the Grass.[68]

Renoir made his last film in 1969, Le Petit théâtre de Jean Renoir (The Little Theatre of Jean Renoir).[69] The film is a series of four short films made in a variety of styles. It is, in many ways, one of his most challenging, avant-garde and unconventional works.[70][71]

Unable to obtain financing for his films and suffering declining health, Renoir spent his last years receiving friends at his home in Beverly Hills, and writing novels and his memoirs.[72]

In 1973 Renoir was preparing a production of his stage play, Carola, with Leslie Caron and Mel Ferrer when he fell ill and was unable to direct. The producer Norman Lloyd, a friend and actor in The Southerner, took over the direction of the play. It was broadcast in the series program Hollywood Television Theater on WNET, Channel 13, New York on February 3, 1973.[73]

Renoir published his memoirs, My Life and My Films, in 1974. He wrote of the influence exercised by Gabrielle Renard, his nanny and his mother's cousin, with whom he developed a mutual lifelong bond. He concluded his memoirs with the words he had often spoken as a child, "Wait for me, Gabrielle."[74]

In 1975 Renoir received a lifetime Academy Award for his contribution to the motion picture industry. That same year a retrospective of his work was shown at the National Film Theatre in London.[75] Also in 1975, the government of France elevated him to the rank of commander in the Légion d'honneur.[76]

Jean Renoir died in Beverly Hills, California on February 12, 1979. His body was returned to France and buried beside his family in the cemetery at Essoyes, Aube, France.[77] He was survived by his son Alain and three grandchildren, John, Peter and Anne.

Jean Renoir has a star on the Hollywood Walk of Fame at 6212 Hollywood Blvd.[88] Several of his ceramics were collected by Albert Barnes, who was a major patron and collector of his father. They can be found on display beneath his father's paintings at the Barnes Foundation in Philadelphia.[89]

Renoir's son, Alain Renoir (1921-2008), became a professor of English and comparative literature at the University of California at Berkeley and a scholar of medieval English literature.