From Infogalactic: the planetary knowledge core
Jump to: navigation, search
Not to be confused with latinum.
"Latio" redirects here. For a Nissan car, see Nissan Latio.
For other uses, see Latium (disambiguation). 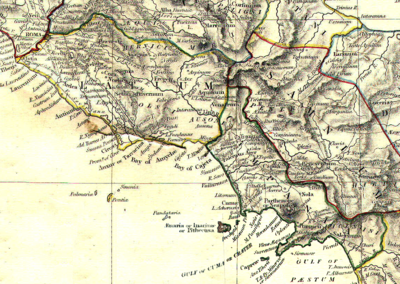 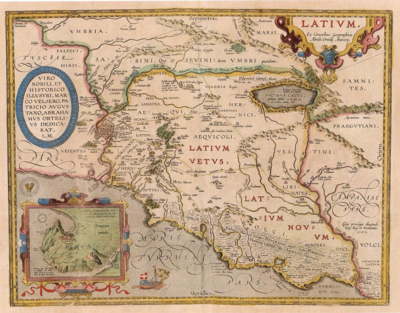 Latium (Latin: Lătĭŭm, [ˈlatjʊ̃]) is the region of central western Italy in which the city of Rome was founded and grew to be the capital city of the Roman Empire. Latium was originally a small triangle of fertile, volcanic soil on which resided the tribe of the Latins or Latians.[1] It was located on the left bank (east and south) of the Tiber river, extending northward to the Anio river (a left-bank tributary of the Tiber) and southeastward to the Pomptina Palus (Pontine Marshes, now the Pontine Fields) as far south as the Circeian promontory.[2] The right bank of the Tiber was occupied by the Etruscan city of Veii, and the other borders were occupied by Italic tribes. Subsequently Rome defeated Veii and then its Italic neighbors, expanding Latium to the Apennine Mountains in the northeast and to the opposite end of the marsh in the southeast. The modern descendant, the Italian Regione of Lazio, also called Latium in Latin, and occasionally in modern English, is somewhat larger still, but not as much as double the original Latium.

The ancient language of the Latins, the tribesmen who occupied Latium, was to become the immediate predecessor of the Old Latin language, ancestor of Latin and the Romance languages. Latium has played an important role in history owing to its status as the host of the capital city of Rome, at one time the cultural and political centre of the Roman Empire. Consequently, Latium is home to celebrated works of art and architecture.

Earliest known Latium was the country of the Latini, a tribe whose recognized center was a large, extinct volcano, Mons Albanus ("the Alban Mount", today's Colli Albani), 20 kilometres (12 mi) to the southeast of Rome, 64 kilometres (40 mi) in circumference. In its center is a crater lake, Lacus Albanus (Lago Albano), oval in shape, a few km long and wide. At the top of the second-highest peak (Monte Cavo) was a temple to Jupiter Latiaris, where the Latini held state functions before their subjection to Rome, and the Romans subsequently held religious and state ceremonies. The last pagan temple to be built stood until the Middle Ages when its stone and location were reused for various monasteries and finally a hotel. During World War II, the Wehrmacht turned it into a radio station, which was captured after an infantry battle by American troops in 1944, and it currently is a controversial telecommunications station surrounded by antennae considered unsightly by the population within view.[citation needed]

The selection of Jupiter as a state god and the descent of the name Latini to the name of the Latin language are sufficient to identify the Latins as a tribe of Indo-European descent. Virgil, a major poet of the early Roman Empire, under Augustus, derived Latium from the word for "hidden" (English latent) because in a myth Saturn, ruler of the golden age in Latium, hid (latuisset)[3] from Jupiter there.[4] A major modern etymology is that Lazio comes from the Latin word "latus", meaning "wide",[5] expressing the idea of "flat land" meaning the Roman Campagna.

The region that would become Latium had been home to settled agricultural populations since the early Bronze Age and was known to the Ancient Greeks and even earlier to the Mycenaean Greeks.[6] It was populated by a mixture of Indo-European and non-Indo-European language speakers. The name is most likely derived from the Latin word "latus", meaning "wide", expressing the idea of "flat land" (in contrast to the local Sabine high country) but the name may originate from an earlier, non Indo-European one. The Etruscans, from their home region of Etruria (modern day Tuscany) exerted a strong cultural and political influence on Latium from about the 8th century BC onward. However, they were unable to assert political hegemony over the region, which was controlled by small, autonomous city-states in a manner roughly analogous to the state of affairs that prevailed in Ancient Greece. Indeed, the region's cultural and geographic proximity to the cities of Magna Graecia had a strong impact upon its early history.

One of the earliest recorded non-Etruscan settlements in Latium is the quasi-mythical city of Alba Longa located somewhat southeast of the present-day city of Rome. According to Livy and other ancient authorities, it was here that the Latin League was founded, a coalition of city-states intended as a bulwark against Etruscan expansion.

The city-state of Rome emerged as the dominant political and military power in the region, following Rome's destruction of Alba Longa in the middle of the 7th century BC.

The emperor Augustus officially united all of present-day Italy into a single geo-political entity, Italia, dividing it into eleven regions. Latium – together with the present region of Campagna immediately to the southeast of Latium and the seat of Naples – became Region I.

After the Gothic War (535–554) A.D. and the Roman conquest, this region regained its freedom, because the "Roman Duchy" became the property of the Eastern Emperor. However the long wars against the barbarian Longobards weakened the region, which was seized by the Roman Bishop who already had several properties in those territories.

The strengthening of the religious and ecclesiastical aristocracy led to continuous power struggles between lords and the Roman bishop until the middle of the 16th century. Innocent III tried to strengthen his own territorial power, wishing to assert his authority in the provincial administrations of Tuscia, Campagna and Marittima through the Church's representatives, in order to reduce the power of the Colonna family. Other popes tried to do the same.

During the period when the papacy resided in Avignon, France (1309–1377), the feudal lords' power increased due to the absence of the Pope from Rome. Small communes, and Rome above all, opposed the lords' increasing power, and with Cola di Rienzo, they tried to present themselves as antagonists of the ecclesiastical power. However, between 1353 and 1367, the papacy regained control of Latium and the rest of the Papal States.

From the middle of the 16th century, the papacy politically unified Latium with the Papal States[citation needed], so that these territories became provincial administrations of St. Peter's estate; governors in Viterbo, in Marittima and Campagna, and in Frosinone administered them for the papacy.

After the short-lived Roman Republic (18th century), the region's annexation to France by Napoleon Bonaparte in February 1798, Latium became again part of the Papal States in October, 1799.

On 20 September 1870, the capture of Rome, during the reign of Pope Pius IX, and France's defeat at Sedan, completed Italian unification, and Latium was incorporated into the Kingdom of Italy.

Latium, often referred to by the Italian name Lazio, is a government region, i.e. one of the first-level administrative divisions of the state. There are twenty regions in Italy. Originally meant as administrative districts of the central state, the regions acquired a significant level of autonomy following a constitutional reform in 2001. The modern region of Latium contains the national capital Rome.