The Canadian legal system has its foundation in the English common law system with some influence from Scots Law, inherited from being a former colony of the United Kingdom and later a Commonwealth Realm member of the Commonwealth of Nations. The legal system is bi-jurisdictional, as the responsibilities of public (includes criminal) and private law are separated and exercised exclusively by Parliament and the provinces respectively. Quebec, however, still retains a civil system for issues of private law (as this domain falls within the exclusive jurisdiction of the provinces). Both legal systems are subject to the Constitution of Canada. Criminal prosecutions are conducted in the style of the British common law, as this jurisdiction falls exclusively to the federal government. The federal government also has jurisdiction over certain exclusive domains which are regulated exclusively by Parliament, as well as all matters and disputes between provinces. These generally include interprovincial transport (rail, air and marine transport) as well as interprovincial trade and commerce (which generally concerns energy, the environment, agriculture). 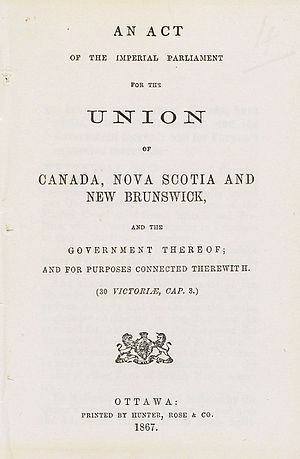 Cover of the Constitution Act, 1867

The Constitution Act, 1982 stipulates that Canada's constitution includes that act, a series of thirty acts and orders referred to in a schedule to that act (the most notable of which is the Constitution Act, 1867), and any amendment to any of those acts.[2] However, the Supreme Court of Canada has found that this list is not intended to be exhaustive, and in 1998's Reference re Secession of Quebec identified four "supporting principles and rules" that are included as unwritten elements of the constitution: federalism, democracy, constitutionalism and the rule of law, and respect for minorities.[3] While these principles are an enforceable part of Canada's constitution, Canadian courts have not used them to override the written text of the constitution, instead confining their role to "filling gaps".[4] 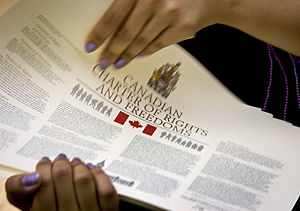 Copies of the Canadian Charter of Rights and Freedoms

The Constitution Act, 1867 assigns powers to the provincial and federal governments. Matters under federal jurisdiction include criminal law, trade and commerce, banking, and immigration.[7] The federal government also has the residual power to make laws necessary for Canada's "peace, order and good government".[8] Matters under provincial jurisdiction include hospitals, municipalities, education (except education on First Nation reserves), and property and civil rights.[7][9] The Constitution Act, 1867 also provides that, while provinces establish their own superior courts, the federal government appoints their judges.[10] It also gives the federal Parliament the right to establish a court system responsible for federal law and a general court of appeal to hear appeals of decisions of both federal and provincial courts.[11] This last power resulted in the federal Parliament's creation of the Supreme Court of Canada, which is, despite its role as supreme arbiter of all Canadian law, a creation of simple, rather than constitutional, statute.[12]

The Constitution Act, 1982 created a mechanism by which Canada's constitution could be amended by joint action of federal and provincial governments; prior to 1982, it could be amended only by the Parliament of the United Kingdom.[13] It also created the Charter of Rights and Freedoms, which grants individual rights which may not be contravened by any provincial or federal law.[14]

Acts passed by the Parliament of Canada and by provincial legislatures are the primary sources of law in Canada. Sections 91 and 92 of the Constitution Act, 1867 enumerate the subject matters upon which either level of government (federal and provincial) may legitimately enact legislation.

Laws passed by the federal government are initially announced in the Canada Gazette, a regularly published newspaper for new statutes and regulations.[15][16] Federal bills that receive Royal Assent are subsequently published in the Annual Statutes of Canada. From time to time, the federal government will consolidate its current laws into a single consolidation of law known as the Revised Statutes of Canada.[17] The most recent federal consolidation was in 1985.

Laws passed by the provinces follow a similar practice. The Acts are announced in a provincial gazette, published annually and consolidated from time to time.

All provinces and territories within Canada, excluding Quebec, follow the common law legal tradition.[18] Equally, courts have power under the provincial Judicature Acts to apply equity.

Only the Supreme Court of Canada has authority to bind all courts in the country with a single ruling.[21] The busier courts, such as the Court of Appeal for Ontario, for example, are often looked to for guidance on many local matters of law outside the province, especially in matters such as evidence and criminal law.

When there is little or no existing Canadian decision on a particular legal issue and it becomes necessary to look to a non-Canadian legal authority for reference, decisions of English courts and American courts are often utilized.[22] In light of the long-standing history between English law and Canadian law, the English Court of Appeal and the House of Lords are often cited as and considered persuasive authority, and are often followed.[22] If the legal question at issue relates to matters of constitutional or privacy law, however, decisions of United States courts are more likely to be utilized by Canadian lawyers because there is a much greater body of jurisprudence in U.S. law than English law in these areas.

Decisions from Commonwealth nations, aside from England, are also often treated as persuasive sources of law in Canada.

A major difference between U.S. and Canadian common law is that Canada does not follow the doctrine of Erie Railroad Co. v. Tompkins (1938), and this is so taken for granted that the Supreme Court of Canada has never needed to actually rule upon the question.[23] In other words, there is no distinction in Canada between federal and provincial common law, and the Supreme Court can and does dictate common law directly to the provinces on all matters traditionally encompassed by common law (to the extent not superseded by legislation).[23] From the American perspective, Canadian federalism is thus relatively incomplete, since Canada continues to operate as a unitary state with respect to common law.

Due to Canada’s historical connection with the United Kingdom, decisions of the House of Lords before 1867 are technically still binding on Canada unless they have been overturned by the Supreme Court of Canada, and Canada is still bound by the decisions of the Privy Council before the abolishment of appeals to that entity in 1949.[24] In practice, however, no court in Canada has declared itself bound by any English court decision for decades, and it is highly unlikely that any Canadian court will do so in the future.[24]

Criminal offences are found only within the Criminal Code and other federal statutes; an exception is that contempt of court is the only remaining common law offence in Canada.[25]

For historical reasons, Quebec has a hybrid legal system. Private law follows the civil law tradition, originally expressed in the Coutume de Paris as it applied in what was then New France.[26] Today, the jus commune of Quebec is codified in the Civil Code of Quebec. As for public law, it was made that of the conquering British nation after the fall of New France in 1760, that is the common law. It is important to note that the distinction between civil law and common law is not based on the division of powers set out in the Constitution Act, 1867. Therefore, legislation enacted by the provincial legislature in matters of public law, such as the Code of Penal Procedure, should be interpreted following the common law tradition. Likewise, legislation enacted by the federal Parliament in matters of private law, such as the Divorce Act, is to be interpreted following the civil law tradition and in harmony with the Civil Code of Quebec.

Aboriginal law is based on a variety of sources. Section 91(24) of the Constitution Act, 1867 gives the federal parliament exclusive power to legislate in matters related to Aboriginals.[27]

Canadian administrative law is the body of law that addresses the actions and operations of governments and governmental agencies.[28]

Individual provinces have codified some principles of contract law in a Sale of Goods Act, which was modeled on early English versions. Outside of Quebec, most contract law is still common law, based on the rulings of judges in contract litigation over the years. Quebec, being a civil law jurisdiction, does not have contract law, but rather has its own law of obligations.[30]

Copyright law of Canada governs the legally enforceable rights to creative and artistic works under the laws of Canada.[32] 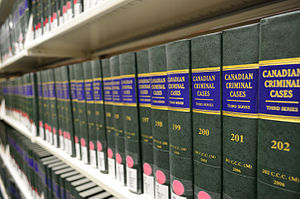 Criminal law in Canada falls under the exclusive legislative jurisdiction of the federal government. The power to enact criminal law is derived from section 91(27) of the Constitution Act, 1867.[33] Most criminal laws have been codified in the Criminal Code, as well as the Controlled Drugs and Substances Act, Youth Criminal Justice Act, and several other peripheral Acts.

The provinces are responsible for the administration of justice, including criminal trials within their respective provinces, despite their inability to enact criminal laws.[34] Provinces do have the power to promulgate quasi-criminal or regulatory offences in a variety of administrative and other areas, and every province has done so with myriad rules and regulations across a broad spectrum.[35]

Canada Evidence Act is an Act of the Parliament of Canada, first passed in 1893, that regulates the rules of evidence in court proceedings under federal law.[36] Each province also has its own evidence statute, governing the law of evidence in civil proceedings in the province.

Family law in Canada concerns the body of Canadian law dealing with family relationship, marriage, and divorce.[37] The federal government has exclusive jurisdiction over the substance of marriage and divorce. Provinces have exclusive jurisdiction over the procedures surrounding marriage. Provinces also have laws dealing with marital property and with family maintenance (including spousal support).

Canadian immigration and refugee law' concerns the area of law related to the admission of foreign nationals into Canada, their rights and responsibilities once admitted, and the conditions of their removal.[38] The primary law on these matters is in the Immigration and Refugee Protection Act

Inheritance law in Canada is constitutionally a provincial matter. Therefore, the laws governing inheritance in Canada are legislated by each individual province.

The Parliament of Canada has exclusive jurisdiction to regulate matters relating to bankruptcy and insolvency, by virtue of s.91 of the Constitution Act, 1867. It has passed some statutes as a result, i.e., The Bankruptcy and Insolvency Act ("BIA") and the The Winding-Up and Restructuring Act (which essentially applies only to financial institutions under federal jurisdiction). In applying these statutes, provincial law has important consequences. Section 67(1)(b) of the BIA provides that "any property that as against the bankrupt is exempt from execution or seizure under any laws applicable in the province within which the property is situated and within which the bankrupt resides". Provincial legislation under the property and civil rights power of the Constitution Act, 1867 regulates the resolution of financial difficulties that occur before the onset of insolvency.

Canadian patent law is the legal system regulating the granting of patents for inventions within Canada, and the enforcement of these rights in Canada.[40]

Property law in Canada is the body of law concerning the rights of individuals over land, objects, and expression within Canada. It encompasses personal property, real property, and intellectual property.[41]

Tort law in Canada concerns the treatment of the law of torts within the Canadian jurisdiction excluding Quebec, which is covered by the law of obligations. [42]

Canada's trademark law provides protection for distinctive marks, certification marks, distinguishing guises, and proposed marks against those who appropriate the goodwill of the mark or create confusion between different vendors' goods or services.[43] 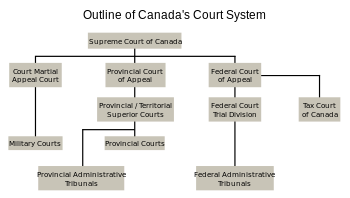