The McDonnell Douglas DC-9 (initially known as Douglas DC-9) is a twin-engine, single-aisle jet airliner. It was first manufactured in 1965 with its maiden flight later that year. The DC-9 was designed for frequent, short flights. The final DC-9 was delivered in October 1982.

During the 1950s Douglas Aircraft studied a short- to medium-range airliner to complement their higher capacity, long range DC-8. (DC stands for Douglas Commercial.)[1] A medium-range four-engine Model 2067 was studied but it did not receive enough interest from airlines and it was abandoned. In 1960, Douglas signed a two-year contract with Sud Aviation for technical cooperation. Douglas would market and support the Sud Aviation Caravelle and produce a licensed version if airlines ordered large numbers. None were ordered and Douglas returned to its design studies after the cooperation deal expired.[2] 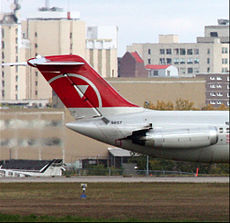 In 1962, design studies were underway. The first version seated 63 passengers and had a gross weight of 69,000 lb (31,300 kg). This design was changed into what would be initial DC-9 variant.[2] Douglas gave approval to produce the DC-9 on April 8, 1963.[2] Unlike the competing but larger Boeing 727 trijet, which used as many 707 components as possible, the DC-9 was an all-new design. The DC-9 has two rear-mounted Pratt & Whitney JT8D turbofan engines, relatively small, efficient wings, and a T-tail.[3] The DC-9's takeoff weight was limited to 80,000 lb (36,300 kg) for a two-person flight crew by Federal Aviation Agency regulations at the time.[2] DC-9 aircraft have five seats across for economy seating. The airplane seats 80 to 135 passengers depending on version and seating arrangement.

The DC-9 was designed for short to medium routes, often to smaller airports with shorter runways and less ground infrastructure than the major airports being served by larger designs like the Boeing 707 and Douglas DC-8. Accessibility and short field characteristics were called for. Turnarounds were simplified by built-in airstairs, including one in the tail, which shortened boarding and deplaning times.

The tail-mounted engine design facilitated a clean wing without engine pods, which had numerous advantages. For example, flaps could be longer, unimpeded by pods on the leading edge and engine blast concerns on the trailing edge. This simplified design improved airflow at low speeds and enabled lower takeoff and approach speeds, thus lowering field length requirements and keeping wing structure light. The second advantage of the tail-mounted engines was the reduction in foreign object damage from ingested debris from runways and aprons. With this position, the engines could ingest ice streaming off the wing roots. Third, the absence of engines in underslung pods allowed a reduction in ground clearance, making the aircraft more accessible to baggage handlers and passengers.

The problem of deep stalling, revealed by the loss of the BAC One-Eleven prototype in 1963, was overcome through various changes, including the introduction of vortilons, small surfaces beneath the wing's leading edge used to control airflow and increase low speed lift.[4] 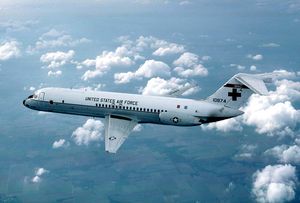 The first DC-9, a production model, flew on February 25, 1965.[5] The second DC-9 flew a few weeks later,[3] with a test fleet of five aircraft flying by July. This allowed the initial Series 10 to gain airworthiness certification on November 23, 1965, and to enter service with Delta Air Lines on December 8.[5] The DC-9 was always intended to be available in multiple versions to suit customer requirements,[6] The first stretched version, the Series 30, with a longer fuselage and extended wing tips, flew on August 1, 1966, entering service with Eastern Air Lines in 1967.[5] The initial Series 10 would be followed by the improved -20, -30, and -40 variants. The final DC-9 series was the -50, which first flew in 1974.[3]

The DC-9 was a commercial success with 976 built when production ended in 1982.[3] The DC-9 is one of the longest-lasting aircraft in operation. Its reliability and efficiency led to sales of its successors into the 21st century.[citation needed] The DC-9 family is one of the most successful jet airliners with a total of over 2,400 units produced; it ranks third behind the second-place Airbus A320 family with over 6,000 produced, and the first-place Boeing 737 with over 8,000 produced.

Studies aimed at further improving DC-9 fuel efficiency, by means of retrofitted wingtips of various types, were undertaken by McDonnell Douglas. However, these did not demonstrate significant benefits, especially with existing fleets shrinking. The wing design makes retrofitting difficult.[7]

The DC-9 was followed by the introduction of the MD-80 series in 1980. This was originally called the DC-9-80 series. It was a lengthened DC-9-50 with a higher maximum takeoff weight (MTOW), a larger wing, new main landing gear, and higher fuel capacity. The MD-80 series features a number of variants of the Pratt & Whitney JT8D turbofan engine having higher thrust ratings than those available on the DC-9. The series includes the MD-81, MD-82, MD-83, MD-88, and shorter fuselage MD-87.

The MD-80 series was further developed into the McDonnell Douglas MD-90 in the early 1990s. It has yet another fuselage stretch, a glass cockpit (first introduced on the MD-88) and completely new International Aero V2500 high-bypass turbofan engines. In comparison to the very successful MD-80, relatively few MD-90s were built.

The final variant was the MD-95, which was renamed the Boeing 717-200 after McDonnell Douglas's merger with Boeing in 1997 and before aircraft deliveries began. The fuselage length and wing are very similar to those of the DC-9-30, but much use was made of lighter, modern materials. Power is supplied by two BMW/Rolls-Royce BR715 high-bypass turbofan engines.

China's Comac ARJ21 is derived from the DC-9 family. The ARJ21 is built with manufacturing tooling from the MD-90 Trunkliner program. As a consequence, it has the same fuselage cross-section, nose profile, and tail.[8] 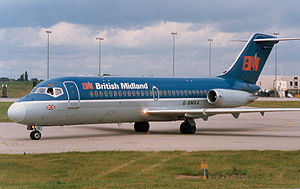 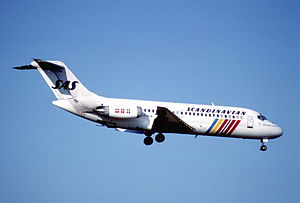 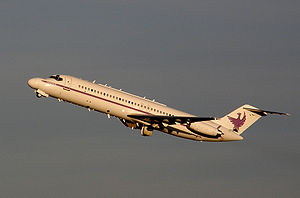 Ex-Spirit Airlines DC-9-30 Firebird II, highly modified as a surveillance aircraft for the U.S. Navy, based at Mojave Airport 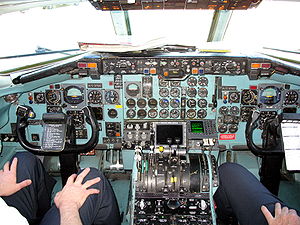 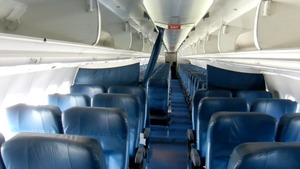 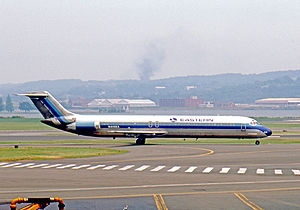 The Series 10 was produced in two main subvariants, the Series 14 and 15, although, of the first four aircraft, three were built as Series 11s and one as Series 12. These were later converted to Series 14 standard. No Series 13 was produced. A passenger/cargo version of the aircraft with a 136 x 81 in side cargo door forward of the wing and a reinforced cabin floor, was certificated on March 1, 1967. Cargo versions included the Series 15MC (Minimum Change) with folding seats that can be carried at the rear of the aircraft, and the Series 15RC (Rapid Change) with seats removable on pallets. These differences disappeared over the years as new interiors have been installed.[9][10]

The Series 10 was unique in the DC-9 family in not having leading edge slats. The Series 10 was designed to have short takeoff and landing distances without the use of leading edge high-lift devices. Therefore, the wing design of the Series 10 featured airfoils with extremely high maximum lift capability in order to obtain the low stalling speeds necessary for short field performance.[11]

The aircraft is fitted with a passenger door in the port forward fuselage, and a service door/emergency exit is installed opposite. An airstair installed below the front passenger door was available as an option as was an airstair in the tailcone. This also doubled as an emergency exit. Available with either two or four overwing exits, the DC-9-10 can seat up to a maximum certified exit limit of 109 passengers. Typical all-economy layout is 90 passengers, and 72 passengers in a more typical mixed-class layout with 12 first and 60 economy-class passengers.[9][10]

All versions of the DC-9 are equipped with a tricycle undercarriage, featuring a twin nose unit and twin main units.[9][10]

The Series 20 was designed to satisfy a Scandinavian Airlines request for improved short field performance by using the more powerful engines and improved wings of the -30 combined with the shorter fuselage used in the -10. Ten Series 20 aircraft were produced, all of them the Model -21.[12] The version was unofficially known as the "DC-9 Sport" within SAS for its good climb performance.[citation needed]

In 1969, a DC-9 Series 20 at Long Beach was fitted with an Elliott Flight Automation Head-up display by McDonnell Douglas and used for successful three-month-long trials with pilots from various airlines, the Federal Aviation Administration, and the US Air Force.[13]

Unlike the Series 10, the Series 30 had leading edge devices to reduce the landing speeds at higher landing weights; full-span slats reduced approach speeds by 6 knots despite 5,000 lb greater weight. The slats were lighter than slotted Krueger flaps, since the structure associated with the slat is a more efficient torque box than the structure associated with the slotted Krueger. The wing had a six percent increase in chord, all ahead of the front spar, allowing the 15 percent chord slat to be incorporated.[14]

The Series 50 was the largest version of the DC-9 to enter airline service. It features an 8 ft 2 in (2.49 m) fuselage stretch and seats up to 139 passengers. It entered revenue service in August 1975 with Eastern Airlines and included a number of detail improvements, a new cabin interior, and more powerful JT8D-15 or -17 engines in the 16,000 and 16,500 lbf (71 and 73 kN) class. McDonnell Douglas delivered 96, all as the Model -51. Some visual cues to distinguish this version from other DC-9 variants include side strakes or fins below the side cockpit windows, spray deflectors on the nose gear, and thrust reversers angled inward 17 degrees as compared to the original configuration. The thrust reverser modification was developed by Air Canada for its earlier aircraft, and adopted by McDonnell Douglas as a standard feature on the series 50. It was also applied to many earlier DC-9s in the course of regular maintenance.[16] 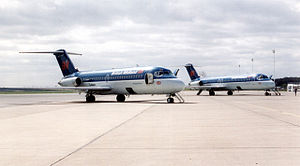 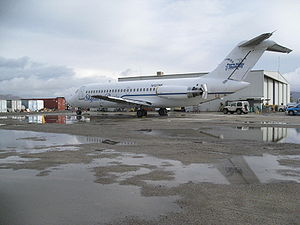 Delta Air Lines since acquiring Northwest Airlines, has operated a fleet of DC-9 aircraft, most over 30 years old. With severe increases in fuel prices in the summer of 2008, Northwest Airlines began retiring its DC-9s, switching to Airbus A319s that are 27% more fuel efficient.[18][19] As the Northwest/Delta merger progressed, Delta returned several stored DC-9s to service. Delta Air Lines made its last DC-9 commercial flight from Minneapolis/St. Paul to Atlanta on January 6, 2014 with the flight number DL2014.[20][21]

With the existing DC-9 fleet shrinking, modifications do not appear to be likely to occur, especially since the wing design makes retrofitting difficult.[7] DC-9s are therefore likely to be further replaced in service by newer airliners such as Boeing 737, Airbus A320, Embraer E-Jets, and the Bombardier CSeries.[22]

One ex-SAS DC-9-21 is operated as a skydiving jump platform at Perris Valley Airport in Perris, California. With the steps on the ventral stairs removed, it is the only airline transport class jet certified to date by the FAA for skydiving operations as of 2016.[23] 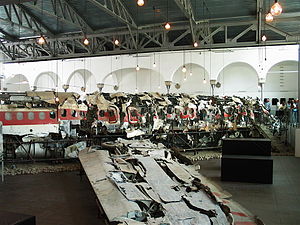 Itavia DC-9 (I-TIGI) was destroyed in an accident at Ustica. Shown in the "Museo della Memoria" opened in Bologna in 2007. 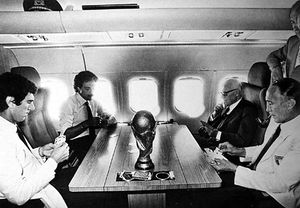 President of Italy Sandro Pertini and members of the Italian national soccer team after their win at the 1982 World Cup. 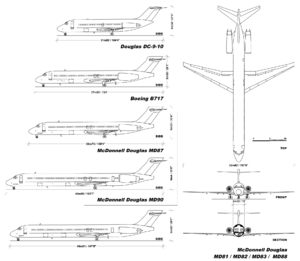