The Douglas DC-3 is a fixed-wing propeller-driven airliner. Its cruise speed (207 mph or 333 km/h) and range (1,500 mi or 2,400 km) revolutionized air transport in the 1930s and 1940s. Its lasting effect on the airline industry and World War II makes it one of the most significant transport aircraft ever made.

The DC-3 was a twin engine metal monoplane, developed as a larger, improved 14 bed sleeper version of the Douglas DC-2. It had many exceptional qualities compared to previous aircraft. It was fast, had a good range and could operate from short runways. It was also reliable, easy to maintain and carried passengers in greater comfort. Before the war it pioneered many air travel routes. It was able to cross the continental United States, making transcontinental flights and worldwide flights possible, and is considered to be the first airliner that could make money by carrying passengers alone.[4]

Civil DC-3 production ended in 1942 with only 607 aircraft being produced. However, together with its military derivative, the C-47 Skytrain (designated the Dakota in RAF Service), and with Russian and Japanese built versions, over 16,000 were built. Following the Second World War, the airliner market was flooded with surplus C-47s and other transport aircraft and attempts to produce an upgraded super DC-3 were a failure.

While the DC-3 was soon made redundant on main routes by more advanced types such as the Douglas DC-6 and Lockheed Constellation, the design continued to prove exceptionally adaptable and useful. Large numbers continued to see service in a wide variety of niche roles well into the 21st century. Approximately 400 DC-3s and converted C-47s are still flying to this day as a testament to the durability of the design, many examples being over 70 years old. There is speculation that the DC-3 may become the first airliner to see over a century of operation.[5]

The designation "DC" stands for "Douglas Commercial". The DC-3 was the culmination of a development effort that began after an inquiry from Transcontinental and Western Airlines (TWA) to Donald Douglas. TWA's rival in transcontinental air service, United Airlines, was starting service with the Boeing 247 and Boeing refused to sell any 247s to other airlines until United's order for 60 aircraft had been filled.[6] TWA asked Douglas to design and build an aircraft to allow TWA to compete with United. Douglas' design, the 1933 DC-1, was promising, and led to the DC-2 in 1934. The DC-2 was a success, but there was room for improvement.

The DC-3 resulted from a marathon telephone call from American Airlines CEO C. R. Smith to Donald Douglas, when Smith persuaded a reluctant Douglas to design a sleeper aircraft based on the DC-2 to replace American's Curtiss Condor II biplanes. (The DC-2's cabin was 66 inches (1.7 m) wide, too narrow for side-by-side berths.) Douglas agreed to go ahead with development only after Smith informed him of American's intention to purchase twenty aircraft. The new aircraft was engineered by a team led by chief engineer Arthur E. Raymond over the next two years, and the prototype DST (for Douglas Sleeper Transport) first flew on December 17, 1935 (the 32nd anniversary of the Wright Brothers' flight at Kitty Hawk). Its cabin was 92 in (2.3 m) wide, and a version with 21 seats instead of the 14-16 sleeping berths[8] of the DST was given the designation DC-3. There was no prototype DC-3; the first DC-3 built followed seven DSTs off the production line and was delivered to American Airlines.[9] 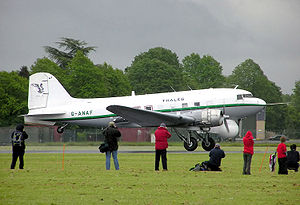 The DC-3 and DST popularized air travel in the United States. Eastbound transcontinental flights could cross the U.S. in about 15 hours with three refueling stops; westbound trips against the wind took 171⁄2 hours. A few years earlier such a trip entailed short hops in slower and shorter-range aircraft during the day, coupled with train travel overnight.[10]

Production of civil DC-3s ended in 1942. Military versions were produced until the end of the war in 1945. A larger, more powerful Super DC-3 was launched in 1949 to positive reviews.The civilian market, however, was flooded with second-hand C-47s, many of which were converted to passenger and cargo versions. Only three Super DC-3s were built and delivered for commercial use the following year. The prototype Super DC-3 served the U.S. Navy with the designation YC-129 alongside 100 R4Ds that had been upgraded to the Super DC-3 specification.

From the early 1950s, some DC-3s were modified to use Rolls-Royce Dart engines, as in the Conroy Turbo Three. Other conversions featured Armstrong Siddeley Mamba and Pratt & Whitney PT6A turbines.

The Greenwich Aircraft Corp DC-3-TP is a conversion with an extended fuselage and with Pratt & Whitney Canada PT6A-65AR or PT6A-67R engines fitted.[12][13][14]

The Basler BT-67 is a conversion of the DC-3/C-47. Basler refurbishes C-47s and DC-3s at Oshkosh, Wisconsin, fitting them with Pratt & Whitney Canada PT6A-67R turboprop engines, lengthening the fuselage by 40 in (100 cm) with a fuselage plug ahead of the wing and strengthening the airframe in selected areas.[15] 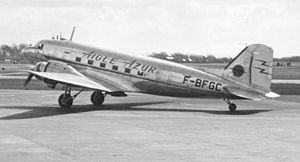 Douglas C-47B of Aigle Azur (France) in 1953, fitted with a ventral Turbomeca Palas booster jet for hot and high operations. 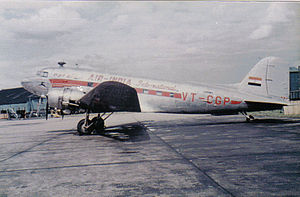 American Airlines inaugurated passenger service on June 26, 1936, with simultaneous flights from Newark, N.J. and Chicago, IL.[17] Early U.S. airlines like American, United, TWA and Eastern ordered over 400 DC-3s. These fleets paved the way for the modern American air travel industry, quickly replacing trains as the favored means of long-distance travel across the United States. A nonprofit group, Flagship Detroit Foundation, continues to operate the only original American Airlines Flagship DC-3 with air show and airport visits throughout the U.S.[18]

In 1936, KLM Royal Dutch Airlines received its first DC-3 (in 1943 it was downed by Luftwaffe fighters while on a scheduled passenger flight), which replaced the DC-2 in service from Amsterdam via Batavia (now Jakarta) to Sydney, by far the longest scheduled route in the world at the time. In total KLM bought 23 DC-3s before the war broke out in Europe.[citation needed]

In 1941, a China National Aviation Corporation (CNAC) DC-3 pressed into wartime transportation service was bombed on the ground at Suifu airfield in China, completely destroying the right wing. The only spare wing available was that of a smaller Douglas DC-2 being overhauled in CNAC's workshops. The DC-2's right wing was taken off, flown to Suifu under the belly of another CNAC DC-3, and grafted to the damaged aircraft. After a single test flight, in which it was discovered that it pulled to the right due to the difference in wing sizes, the so-called DC-21⁄2 went back into service.[19]

Cubana de Aviación became the first Latin American airline to offer a scheduled service to Miami when it started its first scheduled international service from Havana to Miami in 1945 with a DC-3. Cubana used DC-3s on some domestic routes well into the 1960s.[citation needed]

Piedmont Airlines operated DC-3s and C-47s from 1948 to 1963. A DC-3 painted in the representative markings of Piedmont, operated by the Carolinas Aviation Museum, was retired from flight in March 2011. Both Delta Air Lines and Continental Airlines once operated commemorative DC-3s wearing period markings.[citation needed]

During World War II, many civilian DC-3s were drafted for the war effort and just over 10,000 U.S. military versions of the DC-3 were built, under the designations C-47, C-53, R4D, and Dakota. Peak production was reached in 1944, with 4,853 being delivered.[citation needed] The armed forces of many countries used the DC-3 and its military variants for the transport of troops, cargo, and wounded.

Thousands of surplus C-47s, previously operated by several air forces, were converted for civilian use after the war and became the standard equipment of almost all the world's airlines, remaining in frontline service for many years. The ready availability of cheap, easily maintained ex-military C-47s, both large and fast by the standards of the day, jumpstarted the worldwide postwar air transport industry. While aviation in prewar Continental Europe had used the metric system, the overwhelming dominance of C-47s and other U.S. war-surplus types cemented the use of nautical miles, knots and feet in postwar aviation throughout the world.[citation needed]

Douglas developed an improved version, the Super DC-3, with more engine power, greater cargo capacity and a different wing, but with all the bargain-priced surplus aircraft available, they did not sell well in the civil aviation market. Only five were delivered, three of them to Capital Airlines. The U.S. Navy had 100 of its early R4Ds converted to Super DC-3 standard during the early 1950s as the R4D-8, later C-117D. The last U.S. Navy C-117 was retired July 12, 1976.[20] The last U.S. Marine Corps C-117, serial 50835, was retired from active service during June 1982. Several remained in service with small airlines in North and South America in 2006.[21]

A number of aircraft companies attempted to design a "DC-3 replacement" over the next three decades (including the very successful Fokker F27 Friendship), but no single type could match the versatility, rugged reliability and economy of the DC-3. It remained a significant part of air transport systems well into the 1970s.

Perhaps unique among prewar aircraft, the DC-3 is in daily use. There are still small operators with DC-3s in revenue service and as cargo aircraft. The common saying among aviation buffs and pilots is that "the only replacement for a DC-3 is another DC-3". The aircraft's legendary ruggedness is enshrined in the lighthearted description of the DC-3 as "a collection of parts flying in loose formation."[22] Its ability to take off and land on grass or dirt runways makes it popular in developing countries, where runways are not always paved.

The very large number of civil and military operators of the DC-3/C-47s and related types, means that a listing of all the airlines, air forces and other current operators is impractical. As of 2012, DC-3 #10 is still used daily for flights in Colombia.[23] Buffalo Airways, based in Canada's Northwest Territories, operates a scheduled DC-3 passenger service between its main base in Yellowknife and Hay River, plus some passenger charter operations, using DC-3s. Some DC-3s are also used by the airline for cargo operations.[24]

The oldest DC-3 still flying is the original American Airlines Flagship Detroit (c/n 1920, #34 off the Santa Monica production line),[26] which can be seen at airshows around the United States and is owned and operated by the nonprofit Flagship Detroit Foundation.[18]

A 1943 DC-3 was installed as a major design element atop architectural renovations at The Roasterie in Kansas City, Missouri.[28]

DC-3S
Super DC-3, substantially redesigned DC-3 with fuselage stretched by one frame, a new shape outer wings and distinctive tall squared tail, and fitted with two higher powered Wright R-1820 Cyclone or Pratt & Whitney R-2000 engines . Five completed by Douglas for civil use using existing surplus secondhand airframes.[32] Three Super DC-3s were operated by Capital Airlines 1950-1952.[33] Designation also used for examples of the 100 R4Ds that had been converted by Douglas to this standard for the U.S. Navy as R4D-8s (later designated C-117Ds), all fitted with higher poweredWright R-1820 Cyclone engines , some of which entered civil use after retirement from the military.[34]

File:Nakajima L2D2 at Zamboanga 1945.jpeg
A Nakajima L2D in U.S. markings captured in Mindanao and then transferred to Clark Field, Philippines, May 1945

File:Maritime Patrol and Rescue Conroy Tri-Turbo Three Fitzgerald.jpg
The only example of the Conroy Tri-Turbo-Three at the 1978 Farnborough Airshow. This aircraft saw service in both the Arctic and Antarctica

Further information: List of accidents and incidents involving the DC-3

Data from McDonnell Douglas Aircraft since 1920[1]