The Nobel Prize in Chemistry (Swedish: Nobelpriset i kemi) is awarded annually by the Royal Swedish Academy of Sciences to scientists in the various fields of chemistry. It is one of the five Nobel Prizes established by the will of Alfred Nobel in 1895, awarded for outstanding contributions in chemistry, physics, literature, peace, and physiology or medicine. This award is administered by the Nobel Foundation and awarded by Royal Swedish Academy of Sciences on proposal of the Nobel Committee for Chemistry which consists of five members elected by Academy. The award is presented in Stockholm at an annual ceremony on December 10, the anniversary of Nobel's death. The first Nobel Prize in Chemistry was awarded in 1901 to Jacobus Henricus van 't Hoff, of the Netherlands, "for his discovery of the laws of chemical dynamics and osmotic pressure in solutions."

Alfred Nobel stipulated in his last will and testament that his money be used to create a series of prizes for those who confer the "greatest benefit on mankind" in physics, chemistry, peace, physiology or medicine, and literature.[2][3] Though Nobel wrote several wills during his lifetime, the last was written a little over a year before he died, and signed at the Swedish-Norwegian Club in Paris on 27 November 1895.[4][5] Nobel bequeathed 94% of his total assets, 31 million Swedish kronor (US$186 million in 2008), to establish and endow the five Nobel Prizes.[6] Due to the level of skepticism surrounding the will, it was not until April 26, 1897 that it was approved by the Storting (Norwegian Parliament).[7][8] The executors of his will were Ragnar Sohlman and Rudolf Lilljequist, who formed the Nobel Foundation to take care of Nobel's fortune and organise the prizes.

The members of the Norwegian Nobel Committee that were to award the Peace Prize were appointed shortly after the will was approved. The prize-awarding organisations followed: the Karolinska Institutet on June 7, the Swedish Academy on June 9, and the Royal Swedish Academy of Sciences on June 11.[9][10] The Nobel Foundation then reached an agreement on guidelines for how the Nobel Prize should be awarded. In 1900, the Nobel Foundation's newly created statutes were promulgated by King Oscar II.[8][11][12] According to Nobel's will, The Royal Swedish Academy of Sciences were to award the Prize in Chemistry.[12]

The committee and institution serving as the selection board for the prize typically announce the names of the laureates in October. The prize is then awarded at formal ceremonies held annually on December 10, the anniversary of Alfred Nobel's death. "The highlight of the Nobel Prize Award Ceremony in Stockholm is when each Nobel Laureate steps forward to receive the prize from the hands of His Majesty the King of Sweden. The Nobel Laureate receives three things: a diploma, a medal and a document confirming the prize amount" ("What the Nobel Laureates Receive"). Later the Nobel Banquet is held in Stockholm City Hall.

A maximum of three laureates and two different works may be selected. The award can be given to a maximum of three recipients per year. It consists of a gold medal, a diploma, and a cash grant. 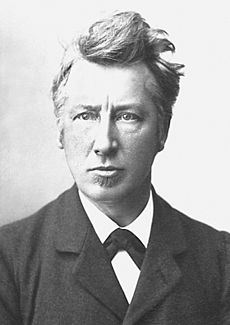 Jacobus Henricus van 't Hoff (1852–1911) was the first person to receive the Nobel Prize in Chemistry, for his discovery of the laws of chemical dynamics and osmotic pressure in solutions.

The Nobel Laureates in chemistry are selected by a committee that consists of five members elected by the Royal Swedish Academy of Sciences. In its first stage, several thousand people are asked to nominate candidates. These names are scrutinized and discussed by experts until only the laureates remain. This slow and thorough process, is arguably what gives the prize its importance.

Forms, which amount to a personal and exclusive invitation, are sent to about three thousand selected individuals to invite them to submit nominations. The names of the nominees are never publicly announced, and neither are they told that they have been considered for the Prize. Nomination records are sealed for fifty years. In practice some nominees do become known. It is also common for publicists to make such a claim – founded or not.

The nominations are screened by committee, and a list is produced of approximately two hundred preliminary candidates. This list is forwarded to selected experts in the field. They remove all but approximately fifteen names. The committee submits a report with recommendations to the appropriate institution.

While posthumous nominations are not permitted, awards can occur if the individual died in the months between the nomination and the decision of the prize committee.

The award in chemistry requires the significance of achievements being recognized is "tested by time." In practice it means that the lag between the discovery and the award is typically on the order of 20 years and can be much longer. As a downside of this approach, not all scientists live long enough for their work to be recognized. Some important scientific discoveries are never considered for a Prize, as the discoverers may have died by the time the impact of their work is realized. For example, the contributions of Rosalind Franklin in discovering the structure of DNA: her x-ray crystallography citing the shape of DNA as a helix, were not realized until after her death, and the recipients of the prize were Watson, Crick, and Wilkins.

A Chemistry Nobel Prize laureate earns a gold medal, a diploma bearing a citation, and a sum of money.[13]

The Nobel Prize medals, minted by Myntverket[14] in Sweden and the Mint of Norway since 1902, are registered trademarks of the Nobel Foundation. Each medal feature an image of Alfred Nobel in left profile on the obverse (front side of the medal). The Nobel Prize medals for Physics, Chemistry, Physiology or Medicine, and Literature have identical obverses, showing the image of Alfred Nobel and the years of his birth and death (1833–1896). Nobel's portrait also appears on the obverse of the Nobel Peace Prize medal and the Medal for the Prize in Economics, but with a slightly different design.[15][16] The image on the reverse of a medal varies according to the institution awarding the prize. The reverse sides of the Nobel Prize medals for Chemistry and Physics share the same design.[17]

Nobel laureates receive a diploma directly from the hands of the King of Sweden. Each diploma is uniquely designed by the prize-awarding institutions for the laureate that receives it. The diploma contains a picture and text which states the name of the laureate and normally a citation of why they received the prize.[18]

The laureate is given a sum of money when they receive the Nobel Prize, in the form of a document confirming the amount awarded; in 2009 the monetary award was 10 million SEK (US$1.4 million).[19] Due to budget cuts, in 2012, the amount for each Nobel prize was 8 million Swedish Krona, or US$1.1 million.[20] The amount of prize money may differ depending on how much money the Nobel Foundation can award that year. If there are two laureates in a particular category, the award grant is divided equally between the recipients. If there are three, the awarding committee has the option of dividing the grant equally, or awarding one-half to one recipient and one-quarter to each of the others.[21][22][23][24]

Nobel Laureates in Chemistry by Nationality

In recent years the Nobel Prize in Chemistry has drawn criticism among chemists who feel that the prize is more frequently awarded to non-chemists than to chemists.[25] In the 30 years leading up to 2012, the Nobel Prize in Chemistry had been awarded ten times for work that resides in biochemistry or molecular biology, and once to a materials scientist. In the ten years leading up to 2012, only four had been to work that is indisputably in chemistry.[25] Commenting on this issue, The Economist writes that the Royal Swedish Academy of Sciences is bound by Nobel's will, which specified only awards in physics, chemistry, literature, medicine, and peace. Biology was in its infancy during Nobel's day, which led to no award being established. The Economist also points out that no Nobel Prizes are awarded for another major discipline, mathematics, and that Nobel's rigid not-more-than-three-winners stipulation is not easily applicable to modern physics, in which progress is often made by huge collaborations and not individual scientists.[26]