From Infogalactic: the planetary knowledge core
Jump to: navigation, search
For other uses, see PPS (disambiguation).

The PPS and its variants were used extensively by the Red Army during World War II and were later adopted by the armed forces of several countries of the former Warsaw Pact as well as its many African and Asian allies.

The PPS was created in response to a Red Army requirement for a compact and lightweight weapon with similar accuracy and projectile energy to the Soviet PPSh-41 submachine gun widely deployed at the time, with reduced rate of fire, produced at lower cost and requiring less manpower, particularly skilled manpower.[1]

Sudaev was ordered by the State Commission for Armaments to perfect for large-scale production the sub-machine gun design of lieutenant I.K. Bezruchko-Vysotsky from the Dzerzhinsky Artillery Academy, who had created two prototypes in 1942; the second of these was the basis of Sudaev's gun.[2]

During design, emphasis was placed on simplifying production and eliminating most machining operations; most of the weapon's parts were sheet-steel stamped. These measures reduced the number of machined components to a bare minimum, cutting down machining time by more than half, to 2.7 hours of machining instead of 7.3 hours for the PPSh-41. There were also savings of over 50% in raw steel usage, down to 6.2 kg instead of 13.9 kg, and fewer workers were required to manufacture and assemble the parts. Thanks to the improvements in production efficiency, the Soviet planners estimated that the new gun would have allowed an increase in monthly submachine gun output from 135,000 units to 350,000 weapons.[3]

Prototypes were field tested between 26 April and 12 May 1942; the evaluation commission's report was largely favorable, but still proposed some minor improvements mostly aimed at strengthening the gun's structure.[2] By July, Shpagin had finished his own improved model (PPSh-2), and it was pitted in field trials against the PPS, which was found superior in most respects: accuracy, reliability, maneuverability.[4] (This was apparently a large scale contest, in which 20 designs participated.[5] On July 28, 1942 GAU head N.D. Yakovlev and his aide Ivan Novikov presented Sudaev's gun to the State Defense Committee for approval.[3] The firearm was accepted into service as the PPS-42 (Russian: Пистолет-пулемёт Судаева—ППС or Pistolet Pulemyot Sudayeva model of 1942).[1] The weapon was put into small-scale production during the Siege of Leningrad; mass production did not commence until early 1943 at the Sestroretsk Arsenal (over 45,000 weapons were produced before being replaced by the improved PPS-43).[1] The factory in charge for the pilot production starting in December 1942 was the Sestroretsk Tool Factory (Russian: Сестрорецкий инструментальный завод «Воскова».) The first series guns were presented for personal inspection to Andrei Zhdanov and Leonid Govorov in the same month. The full-scale production began in 1943, and the official count of PPS-42 guns produced was 46,572. Most were used during the military trials by the soldiers of the Leningrad Front.[3] The military trials officially took place between January and April 1943.[4]

Due to the massive investment already made in machinery for PPSh-41 production, which was already being produced in more than a million pieces per year, it turned out it would have been uneconomical to completely abandon its production in favor of the PPS.[4] By end of the war some two million PPS-43 submachine guns were made. Due to the oversupply of the Soviet army with submachine guns after the war, production of the PPS in the Soviet Union ceased in 1946.[5]

In the last two years of the war, Sudaev continued to experiment with improvements for his submachine gun. Six of his later prototype models, made in 1944 and 1945, are found in the Military Historical Museum of Artillery, Engineers and Signal Corps. These have variations in bolt shape and weight, as well as more obvious outward differences like a wooden, non-folding stock or a folding bayonet.[6]

The PPS remained in service with some Soviet forces until the mid-1950s. Among the last to relinquish it were crews of armored vehicles and the Naval Infantry.[4] Some WWII-era weapons found their way to the Chinese People's Liberation Army and were subsequently captured by UN forces in the Korean War.[7] 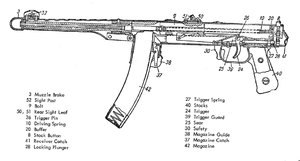 The PPS was an automatic blowback-operated weapon that fired from an open bolt.[1] The bolt was cylindrical in shape and contained a spring-loaded claw extractor, which pulled the empty case out of the chamber and passed it to the fixed ejector housed in the lower receiver. The charging handle was integral to the bolt and was located on the right side; it reciprocated during firing. The PPS originally had a fixed but replaceable firing pin, held in place by the extractor spring. Pulling the trigger released the bolt, which moved forward, stripping a round from the magazine, chambering it and striking the primer in one motion. 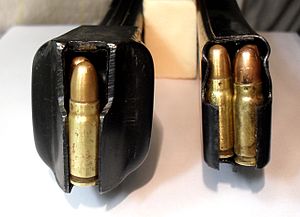 The PPS had a trigger mechanism that allowed only fully automatic fire and a manual safety that secured them against accidental discharges. When in the "safe" position (engaged by sliding a metal bar forward of the trigger guard), both the bolt and trigger were disabled.[1]

The weapon was fed from curved 35-round box magazines. They were not interchangeable with magazines used in the PPSh-41, nor could the gun use drum magazines. It was chambered for the 7.62×25mm Tokarev M1930 pistol cartridge.[1]

The submachine gun's rifled barrel (with 4 right-hand grooves) was mounted in a perforated sheet metal heat guard and was equipped with a crude muzzle brake, consisting of a strip of steel bent into a U-shape that deflected exiting muzzle gases to the sides and backwards, thus compensating for recoil.[1]

A folding stock was attached to the receiver with a spring-loaded catch button on the left side. The stock folded up and over the receiver top cover and the weapon could be fired in this arrangement. The submachine gun also had a pistol grip but was not provided with a forward grip as the magazine well was intended to fulfil this role.[1] The PPS was usually supplied with two magazine pouches, an oil bottle, bore brush and sling.

The PPS was fitted with a set of open-type iron sights consisting of a fixed front post protected from impact by two sheet metal plates and a flip rear sight with two pivoting notches, for firing at 100 and 200 m.[1] 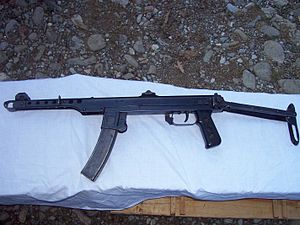