From Infogalactic: the planetary knowledge core
Jump to: navigation, search
This article is about a type of involuntary servitude. For relatively menial jobs so labelled, see Peon (slang). 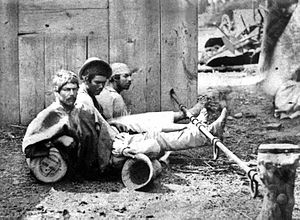 Punishment of peons in 1862

A peon is a person subject to peonage (/ˈpiːɒn/, from Spanish peón [peˈon]), a type of involuntary servitude of laborers (peons) having little control over their employment conditions. Peonage existed historically during the colonial period, especially in Latin America and areas of Spanish rule.

The English words peon and peonage were derived from the Spanish word, and have a variety of meanings related to the Spanish usage, as well as some other meanings.[1] In addition to the meaning of forced laborer, a peon may also be a person with little authority, often assigned unskilled tasks; an underling or any person subjected to capricious or unreasonable oversight. In this sense, peon can be used in either a derogatory or self-effacing context.

However, the term has a historical basis and usage related to much more severe conditions of forced labor.

There are other usages in contemporary cultures:

The origin of this form of involuntary servitude goes back to the Spanish conquest of Mexico when conquistadors forced natives to work for Spanish planters and mine operators. Peonage was prevalent in Spanish America especially in the countries of Mexico, Guatemala, Ecuador, and Peru. It remains an important part of social life, as among the Urarina of the Peruvian Amazon.[3]

After the American Civil War of 1861-1865, peonage developed in the Southern United States. Poor white farmers and formerly enslaved African Americans known as freedmen who could not afford their own land would farm another person's land, exchanging labor for a share of the crops. This was called sharecropping and initially the benefits were mutual. The land owner would pay for the seeds and tools in exchange for a percentage of the money earned from the crop and a portion of the crop. As time passed, many landowners began to abuse this system. The landowner would force the tenant farmer or sharecropper to buy seeds and tools from the land owner’s store, which often had inflated prices. As sharecroppers were often illiterate, they had to depend on the books and accounting by the landowner and his staff. Other tactics included debiting expenses against the sharecropper's profits after the crop was harvested and "miscalculating" the net profit from the harvest, thereby keeping the sharecropper in perpetual debt to the landowner. Since the tenant farmers could not offset the costs, they were forced into involuntary labor due to the debts they owed the land owner.

After the U.S. Civil War, the South passed "Black Codes", laws that tried to control freed black slaves. Vagrancy laws were included in these Black Codes. Homeless or even unemployed African Americans who were between jobs, most of whom were former slaves were arrested and fined as vagrants. Usually lacking the resources to pay the fine, the "vagrant" was sent to county labor or hired out to a private employer. The authorities also tried to restrict the movement of freedmen between rural areas and cities, to between towns. Under such laws, local officials arbitrarily arrested tens of thousands of freedmen and charged them with fines and court costs of their cases. White merchants, farmers, and business owners could pay their debts and the prisoner had to work off the debt. Prisoners were leased as laborers to owners and operators of coal mines, lumber camps, brickyards, railroads, quarries, and farm plantations, with the revenues for their labor going to the states. Government officials leased imprisoned blacks and whites to small town entrepreneurs, provincial farmers, and dozens of corporations looking for cheap labor. Their labor was repeatedly bought and sold for decades after the official abolition of American slavery.[4]

Southern states and private businesses boomed with this unpaid labor. It is estimated that up to 40% of blacks in the South were trapped in peonage in the beginning of the 20th century. Overseers and owners often used severe deprivation, beatings, whippings, and other abuse as "discipline" against the workers.[5] 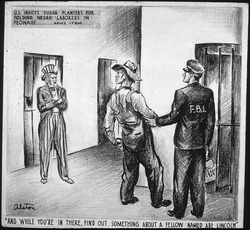 Cartoon of Indictment of US Planters and negro peonage

After the Civil War, the Thirteenth Amendment prohibited involuntary servitude such as peonage for all but convicted criminals. Congress also passed various laws to protect the constitutional rights of Southern blacks, making those who violated such rights by conspiracy, by trespass, or in disguise, guilty of an offence punishable by ten years in prison and civil disability. Unlawful use of state law to subvert rights under the Federal Constitution was made punishable by fine or a year's imprisonment. Until the involuntary servitude was abolished by president Lyndon B. Johnson in 1966 (exact date unknown), sharecroppers in Southern states were forced to continue working to pay off old debts or to pay taxes. Southern states allowed this in order to preserve sharecropping.

In October 1910 Florida sugar cane plantation planter Edgar Watson[6] was shot and killed by his own neighbors; according to legend he would use peonage Native American and Negro help and then would "pay" his workers by killing them.[7] His story was fictionalized by writer Peter Matthiessen in his Lost River Trilogy later remade into Shadow Country

Because of the Spanish tradition, peonage was still widespread in New Mexico Territory after the American Civil War. Because New Mexico laws supported peonage, the US Congress passed an anti-peonage law on March 2, 1867 as follows: "Sec 1990. The holding of any person to service or labor under the system known as peonage is abolished and forever prohibited in the territory of New Mexico, or in any other territory or state of the United States; and all acts, laws, … made to establish, maintain, or enforce, directly or indirectly, the voluntary or involuntary service or labour of any persons as peons, in liquidation of any debt or obligation, or otherwise, are declared null and void."[21] The current version of this statute is codified at Chapter 21-I of 42 U.S.C. § 1994 and makes no specific mention of New Mexico.