From Infogalactic: the planetary knowledge core
Jump to: navigation, search
For the surname, see Pfennig (surname). 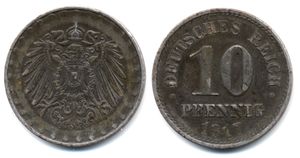 Pfennige (help·info), is a former German coin or note, which was official currency from the 9th century until the introduction of the euro in 2002.

While a valuable coin during the Middle Ages, it lost its value through the years and was the minor coin of the Mark currencies in the German Reich, the former Federal Republic of Germany (FRG, West Germany) and the German Democratic Republic (GDR, East Germany), and after the German reunification in the present Federal Republic of Germany until the introduction of the euro. Pfennig was also the name of the subunit of the Danzig mark (1922–1923) and the Danzig gulden (1923–1939) in the Free City of Danzig (German: Freie Stadt Danzig; Polish: Wolne Miasto Gdańsk).

As a currency sign a variation of the minuscule letter ‘d’ for ‘denarius’ in German Kurrent script was modified so the terminal end of the minuscule Kurrent ‘d’, that trailed at the top of the ascender in an anticlockwise loop, was instead brought down behind the right of the ascender, to form a descender, that hooked clockwise, thus making it a distinct symbol, different from any of the other Kurrent letters in its own right: ₰; compare with the minuscule Kurrent ‘d’ given in the archetypal example of Kurrent script found in the upper right of the article on Kurrent. (N.B. In a way that is the opposite of an English model, in German the lowercase letter is always given first, before the upper case letter, e.g. ‘d,D’ in German, v. the standard form ‘D,d’ etc., customary in the English-speaking world).

The Pfennig symbol has nearly fallen out of use since the 1950s, with the demise and eventual abolition of the Reichsmark with its Reichspfennig, to say nothing of the abolition of Kurrent by the National Socialists on 3 January 1941, thus making it increasingly cryptic as familiarity with Kurrent script has decreased since that time. The symbol is encoded in Unicode at U+20B0 ₰ GERMAN PENNY SIGN (HTML &#8368;).

The etymology of the Pfennig is not completely clear, but seems to rely on the way coins were minted during the Middle Ages: the base material were thin flat metal discs. The value was embossed from one side, creating a pan (German Pfanne)-like coin.

In some German countries (such as Prussia and Bavaria), coins had similar but different names, as Pfenning, Penning, Pending, Pfanding and Penny. This was for better handling due to different currencies (of different states within the Deutscher Bund) used simultaneously.

In the 8th century Charlemagne declared that 240 Pfennigs should be minted from a pound (c. 408 grams) of silver. A single coin had a mass of 1.7 grams after the coinage reform of circa 790. Until the 13th century, the pfennig was made from real silver, and thus of high value. From the 12th century on, the German King was no longer able to enforce the regalia to mint coins, so many towns and local lords made their own coins. Mostly, less valuable metals (usually copper with trace additions of tin and lead) and less metal per coin was used, so different Pfennigs had different values. Within a few decades, two parallel denominations had developed: high-value Weißpfennige - "white Pfennigs" with over 50 percent of silver - and low-value Schwarzpfennige - "black Pfennigs" with a very high content of copper and little silver or no silver at all.

Some renowned coins made of copper are the Häller or Haller Pfennig of Schwäbisch Hall, some centuries later called Heller, and minted throughout the country, and the Kreuzer (from "Kreuz", the cross minted on the coins), minted in Austria, Switzerland, and some regions of Upper Germany.

By the late 17th century, the Pfennigs had lost most of their value. The last Pfennig coins containing traces of silver are rarities minted in 1805.

The Mark gold currency, introduced in 1873 as currency of the newly founded German Reich, was divided as 1 Mark = 100 Pfennig. This partition was retained through all German currencies until 2001.

The last West German one- and two-Pfennig coins were steel with a copper coating. The five- and ten-Pfennig coins were steel with a brass coating. The latter was called a Groschen, while the five-pfennig coin, half a groschen, was regionally (east of the river Elbe) also referred to as the Sechser (English: sixpence), deriving from the former duodecimal division of the groschen. All four coins had their value imprinted on the obverse and an oak on the reverse.

The coins of the Mark der DDR were made of aluminium, except for the 20 pfennigs coin, which was made of an aluminium copper alloy.

Pfennig since the euro

After the introduction of the euro, some, mainly older, Germans tend to use the term Pfennig instead of cent for the copper-coloured coins (and the term Groschen for the 10-cents-coin).[citation needed]

The pfennig ligature is defined and coded in Unicode as follows: