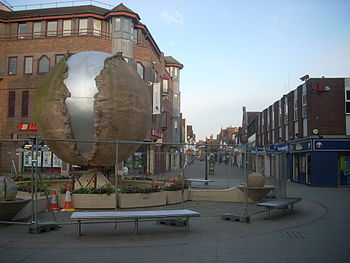 The Shelley fountain fenced off for repairs in April 2009

The Rising Universe, more commonly known locally as the Shelley Fountain, is a large modern water sculpture in Horsham, West Sussex, England. It was created by sculptor Angela Conner and installed in 1996 to commemorate the bicentenary of the birth of the poet Percy Bysshe Shelley, who was born near Horsham. The fountain consists of a large globe mounted on a pillar, designed to fill with water pumped from below. As the sphere fills it descends slowly (over a period of about five minutes) after which a torrent of six and a half tons of water is released into the pool below; it then quickly rises and the cycle starts over again. It is 45 ft across at its base, standing 28 ft high.[1]

An extract from Shelley's 1817 poem 'Mont Blanc' appears on a plaque on the sculpture:

The everlasting universe of things

Flows through the mind, and rolls its rapid waves,
Now dark – now glittering – now reflecting gloom –
Now lending splendour, where from secret springs
The source of human thought its tribute brings
Of waters, – with a sound but half its own,
Such as a feeble brook will oft assume
In the wild woods, among the mountains lone,
Where waterfalls around it leap for ever,
Where woods and winds contend, and a vast river

Over its rocks ceaselessly bursts and raves.

The fountain was switched off in the spring of 2006 to conserve water due to water shortages in the south of England. Although the water is recycled, it loses 180 gallons of water a day to filtration and evaporation. It was switched on again in November 2006. In May 2008 the fountain was turned off again due to the failure of its main hydraulic cylinder.[2] On 19 January 2009 the fountain was fenced off for repairs.[3]

In October 2013 a local newspaper attempted to create a debate about the future of the sculpture largely on the grounds that it is expensive to maintain. Some local Horsham residents used the debate to admonish the sculpture as not to their taste. There were also representations of support for Conner's work but the future of the piece is in question, at least in its present position.[4]