From Infogalactic: the planetary knowledge core
Jump to: navigation, search
This article is about a sonnet by Percy Bysshe Shelley. For other uses, see Ozymandias (disambiguation).

A fair copy draft (c. 1817) of Shelley's "Ozymandias" in the collection of Oxford's Bodleian Library

"Ozymandias" (in five syllables: /ˌɒziˈmændiəs/, oz-ee-MAN-dee-əs; or four: /ˌɒziˈmændjəs/, oz-ee-MAND-yəs)[1] is a sonnet written by English romantic poet Percy Bysshe Shelley (1792–1822), first published in the 11 January 1818 issue of The Examiner[2] in London. It was included the following year in Shelley's collection Rosalind and Helen, A Modern Eclogue; with Other Poems (1819)[3] and in a posthumous compilation of his poems published in 1826.[4] "Ozymandias" is regarded as one of Shelley's most famous works and is frequently anthologised.

In antiquity, Ozymandias was a Greek name for the Egyptian pharaoh Ramesses II. Shelley began writing his poem in 1817, soon after the announcement of the British Museum's acquisition of a large fragment of a statue of Ramesses II from the thirteenth century BC, leading some scholars to believe that Shelley was inspired by this. The 7.25-ton fragment of the statue's head and torso had been removed in 1816 from the mortuary temple of Ramesses at Thebes by Italian adventurer Giovanni Battista Belzoni. It was expected to arrive in London in 1818, but did not arrive until 1821.[5][6] Shelley wrote the poem in friendly competition with his friend and fellow poet Horace Smith (1779–1849), who also wrote a sonnet on the same topic with the very same title. Smith's poem was first published in The Examiner a few weeks after Shelley's sonnet. Both poems explore the fate of history and the ravages of time: that all prominent figures and the empires that they build are impermanent and their legacies fated to decay and oblivion. 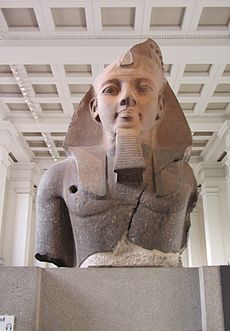 The Younger Memnon statue of Ramesses II in the British Museum. Its imminent arrival in London may have inspired the poem.

The banker and political writer Horace Smith spent the Christmas season of 1817–1818 with Percy Bysshe Shelley and Mary Shelley. At this time members of Shelley's literary circle would sometimes challenge each other to write competing sonnets on a common subject—Shelley, John Keats and Leigh Hunt wrote competing sonnets on the Nile around the same time. Shelley and Smith chose a passage from the Greek Historian Diodorus Siculus, which described a massive Egyptian statue and quoted its inscription: "King of Kings Ozymandias am I. If any want to know how great I am and where I lie, let him outdo me in my work." In the poem Diodorus becomes "a traveller from an antique land".[7]

The two poems were later published in Leigh Hunt's The Examiner,[2] published by Leigh's brother John Hunt in London. (Hunt was already planning to publish a long excerpt from Shelley's new epic The Revolt of Islam later the same month.) Shelley's was published on 11 January 1818 under the pen name Glirastes. It appeared on page 24 in the yearly collection, under Original Poetry. Smith's was published, along by a note signed with the initials H.S., on 1 February 1818. Shelley's poem was later republished under the title "Sonnet. Ozymandias" in his 1819 collection Rosalind and Helen, A Modern Eclogue; with Other Poems by Charles and James Ollier[3] and in the 1826 Miscellaneous and Posthumous Poems of Percy Bysshe Shelley by William Benbow, both in London.[4]

Shelley wrote the poem in competition with his friend Horace Smith, who published his sonnet a month after Shelley's in the same magazine.[8] It takes the same subject, tells the same story, and makes a similar moral point, but one related more directly to modernity, ending by imagining a hunter of the future looking in wonder on the ruins of an annihilated London. It was originally published under the same title as Shelley's verse; but in later collections Smith retitled it "On A Stupendous Leg of Granite, Discovered Standing by Itself in the Deserts of Egypt, with the Inscription Inserted Below".[9]

Comparison of the two poems 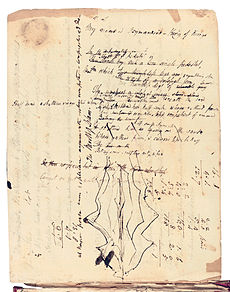 "Ozymandias" is a sonnet, written in loose iambic pentameter, but with an atypical rhyme scheme when compared to other English-language sonnets, and without the characteristic octave-and-sestet structure.

The central theme of "Ozymandias" is contrasting the inevitable decline of all leaders and of the empires they build with their pretensions to greatness.[11]

"Ozymandias" represents a transliteration into Greek of a part of Ramesses' throne name, User-maat-re Setep-en-re. The sonnet paraphrases the inscription on the base of the statue, given by Diodorus Siculus in his Bibliotheca historica, as "King of Kings am I, Osymandias. If anyone would know how great I am and where I lie, let him surpass one of my works."[12][13][14] Shelley's poem may have been inspired by the arrival in London in 1821 of a colossal statue of Ramesses II, acquired for the British Museum by the Italian adventurer Giovanni Belzoni in 1816. The poem was written and published before the statue arrived in Britain,[6] but the reports of the statue's imminent arrival may have inspired the poem.[15] The statue's repute in Western Europe preceded its actual arrival in Britain, and Napoleon had previously made an unsuccessful attempt to acquire it for France.

The verb, "to mock," used in the poem to describe the actions of the sculptor, had two senses. The older sense, "to fashion an imitation of reality" (as in "a mock-up"),[16] existed for several centuries before the poem was written. The irony was not lost to Shelley however, as by his day the second sense, "to ridicule" (especially by mimicking) had come to the fore.[citation needed]

The poem has influenced the production of numerous creative works across a range of artistic disciplines. Crime novelist Robert B. Parker opens his 1981 Spenser novel Early Autumn with a full quotation of the poem. In John Christopher's The Tripods trilogy (1967), a vagrant character named Ozymandias leads the characters to rebel against the tripods, which begins the story arc. The writer Alan Moore named a superhero Ozymandias in his 1986–87 comic book miniseries Watchmen and recited the poem in the course of the story.[17] The Uncanny X-Men comic series also featured a character named Ozymandias.

The third-to-last episode of the American television series Breaking Bad, titled "Ozymandias", was directly influenced by the poem's content, and draws on the poem's theme of collapse following greatness; in a teaser trailer for the show's final eight episodes, the entire poem is recited by lead actor Bryan Cranston.[18][19] In the fifth season episode of the TV series Mad Men entitled "Dark Shadows," copywriter Michael Ginsberg quotes the line "Look on my works ye mighty, and despair." Stan accuses Ginsberg of failing to heed the context: "You should read the rest of the poem, you boob!"[20]

Tom Holland's non-fiction book Rubicon, which recounts the final days of the Roman Republic, quotes the poem when describing the death of Pompey.

Woody Allen's films Stardust Memories (1980) and To Rome with Love (2012) use the term "Ozymandias Melancholia", which Allen defines as "the realisation that your works of art will not save you and will mean nothing down the line".[21]

In May of 2014, Gearbox Software released a promotional video teasing Borderlands: The Pre-Sequel!. In it, the character Handsome Jack makes up a parody of the Ozymandias poems, changing it to be about himself. He obviously hasn't read the poems beforehand, since he is surprised when he realizes that the statue represents a fallen empire. He hastily backtracks and wraps up his parody with a chaotic description of his version of the statue and how he would like it to be received.[22]

Musical works that reference the poem include a setting in Russian for baritone by the Ukrainian composer Borys Lyatoshynsky,[23] the song Ozymandias from Glass Hammer's 2014 album Ode to Echo and Joanna Newsom's 2015 single "Sapokanikan".[24]