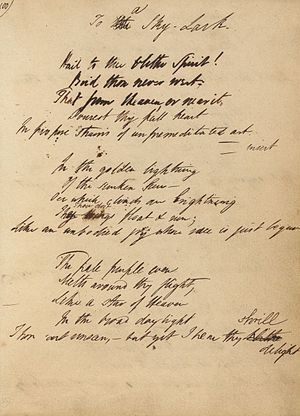 "To a Skylark" is a poem completed by Percy Bysshe Shelley in late June 1820 and published accompanying his lyrical drama Prometheus Unbound by Charles and James Collier in London.[1]

It was inspired by an evening walk in the country near Livorno, Italy, with his wife Mary Shelley, and describes the appearance and song of a skylark they come upon.[2] Mary Shelley described the event that inspired Shelley to write "To a Skylark": "In the Spring we spent a week or two near Leghorn (Livorno) ... It was on a beautiful summer evening while wandering among the lanes whose myrtle hedges were the bowers of the fire-flies, that we heard the carolling of the skylark."[3]

The 1941 comic play Blithe Spirit by Noël Coward takes its title from the opening line: