From Infogalactic: the planetary knowledge core
Jump to: navigation, search
Not to be confused with Rugby Football Union.
For other uses, see RFL (disambiguation).

Based at Red Hall in Leeds, it administers the England national rugby league team, the Challenge Cup, Super League and the Rugby League Championships. The social and junior game is administered in association with the British Amateur Rugby League Association (BARLA). The Rugby Football League is a member of the Rugby League European Federation and as a senior Full Member has a combined veto power over the Council with France. The RFL is part of the Community Board, which also has representatives from BARLA, Combined Services, English Schools Rugby League and Student Rugby League.

On Tuesday 27 August 1895, as a result of an emergency meeting in Manchester, prominent Lancashire rugby clubs Broughton Rangers, Leigh, Oldham, Rochdale Hornets, St Helens, Tyldesley, Warrington, Widnes and Wigan declared that they would support their Yorkshire colleagues in their proposal to form a Northern Union.

Two days later, on Thursday 29 August 1895, representatives of 21 clubs met in the George Hotel, Huddersfield to form the "Northern Rugby Football Union" (usually termed Northern Union or NU). Twenty clubs agreed to resign from the Rugby Football Union, but Dewsbury felt unable to comply with the decision. The Cheshire club, Stockport, had telegraphed the meeting requesting admission to the new organisation and was duly accepted with a second Cheshire club, Runcorn, admitted at the next meeting.

The 22 clubs and their years of foundation were:

The British Amateur Rugby League Association (BARLA) was created in 1973 in Huddersfield by a group of enthusiasts concerned about the dramatic disappearance of many amateur leagues and clubs. Fewer than 150 amateur teams remained with a mere 30 youth rugby league teams. The 'breakaway' from the RFL was acrimonious and was strongly contested, with a vote 29-1 against recognising BARLA. Thanks to Tom Mitchell, this changed to a unanimous vote of approval for BARLA within 12 months.

Maurice Lindsay became the Chief Executive of the RFL in 1992, proposing the Super League, which replaced Championship as the sport's premier league competition from 1996 onwards. Lindsay returned to Wigan in 1999 for his second stint at the club after Sir Rodney Walker, then chairman of the RFL, sacked him after a campaign to unseat him failed.[7]

The RFL accumulated losses of £1.9 million at the end of 2001, shortly before a major restructuring of the governing body and the appointment of Richard Lewis as executive chairman in May 2002.[8] Within a year of joining the RFL, he oversaw reunification with BARLA after nearly 30 years of division.[9] Lewis left in 2012 to become Chief Executive of the All England Lawn Tennis and Croquet Club.[10] The RFL net value has been positive every year since 2004, being £1.7M in 2011.[5]

In 2011 a major change to the game was agreed, changing from a winter to a summer game, starting in 2012 with a playing season from March to November, aligning with the Super League, which has played this way since 1996. The regional leagues may include winter competitions in addition.[5]

In 2012, the Rugby Football League were awarded the Stonewall Sport Award in recognition of their work in embracing inclusivity and tackling homophobia.[11] They also became the first UK sporting organisation to make the top 100 employers in the Stonewall Index that measures attitudes towards lesbian, gay and bisexual staff.[12]

The RFL runs the top three divisions of rugby league in England and partly runs the National Conference League which is run by the BARLA. It also runs two domestic cups and organises the World Club Series against three British clubs and three other Australian clubs.

The England national rugby league team represent England in international rugby league football tournaments. The team has now seen a revival, having largely formed from the Great Britain team, who also represented Wales, Scotland and Ireland. The team is run under the auspices of the Rugby Football League. As of 2008, the team now participates in all World Cups, Four Nations, and Test matches.[13]

The team dates back to 1904 when they played against a mixture of Welsh and Scottish players in Wigan.[14] Since then, and right up until the 1950s, they regularly toured Australia and New Zealand and played both home and away matches against neighbours Wales and France. But when it was decided that Great Britain would tour the Southern Hemisphere instead of England, France and Wales became the only regular opponents. Even then though, there are some long periods where England barely played any matches. Their first appearance in the Rugby League World Cup was in 1975, and since then they have become runners-up in 1975 and 1995, the latter tournament being held in England. In 2008 they competed in the 2008 World Cup in Australia. For many years England also competed in the European Nations Cup and in 2006, an England 'A' team, competed for the Federation Shield. In the past England's main rivals have been Wales and France, with the rivalry stretching back to 1908 and 1934 respectively. However, England's main rivals would now be Australia, New Zealand and, to a lesser extent, France.

Traditionally a predominantly white kit is worn including white shorts and socks. However the shirt usually features some form of red, like red stripes, crosses or chevrons. These colours are similar to other English sporting teams and are the colours used on the national flag. In 2008 a new kit was introduced featuring a red cross on the front and red strips down the sides of the shirt, shorts and socks were white too with red strips.[15] Also in 2008 the Rugby Football League chose to abandon the traditional English lion on the badge in favour of a much simpler shield and cross design,[16] nevertheless the team will still be known as "The Lions".

Currently the team is ranked third in the world, behind Australia and New Zealand. Steve McNamara became head coach leaving Bradford to take the national job and Sean O'Loughlin is the current captain.

This article is about the rugby league team. For the rugby union team, see British and Irish Lions.

For most of the 20th century the Great Britain team was assembled to go on tours overseas, and to play against foreign touring teams, as well as competing in Rugby League World Cup tournaments. They were one of the strongest teams in rugby league, though usually playing second fiddle to Australia. They won the Rugby League World Cup on three occasions: 1954, 1960 and 1972.

Since 1995 the RFL have preferred to send the home nations as separate teams for World Cup purposes. Great Britain continued to compete as a test playing nation both home and away. They competed against Australia for the Ashes, and New Zealand for the Baskerville Shield, as well the Tri-Nations series with both Australia and New Zealand. Great Britain also played in series and tours against other nations such as France, Papua New Guinea and Fiji.

In 2006, the RFL announced that after the 2007 All Golds Tour[17] the Great Britain team would no longer compete on a regular basis, and that players would be able to represent England, Wales and Scotland at Test level. It is planned that the Great Britain team will come together in future only for occasional tours, similar to the British and Irish Lions in rugby union. 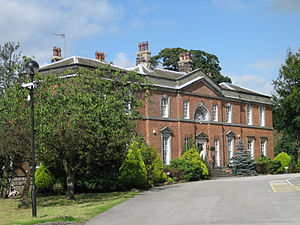 The RFL board consists of the following:[5][10]

The RFL launched the Young People's Advisory Panel in 2010, a group consisting of young people aged 16–25 from across England. The national panel meet at least three times a year at the RFL's Red Hall headquarters to discuss and debate the following:

All Super League matches are governed by the laws set out by the RFL; these laws are enforced by match officials. Former Super League and International Referee Steve Ganson is the current Acting Head of the Match Officials Department and Technical Director. Former Hull player and Huddersfield Head Coach Jon Sharp was the previous Head of the Match Officials Department of the RFL. Sharp was sacked in July 2015 and took up the role of Head Coach at Featherstone Rovers. He assumed his role at the RFL following Stuart Cummings' departure in March 2013 having previously held the role of Match Officials Coach & Technical Director.

Past Presidents of the RFL 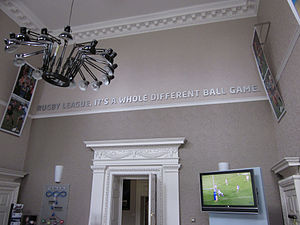 Entrance hall to the Headquarters building