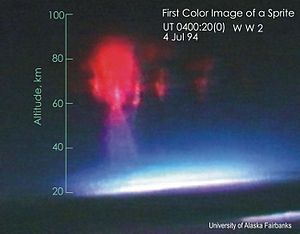 First color image of a sprite, taken from an aircraft 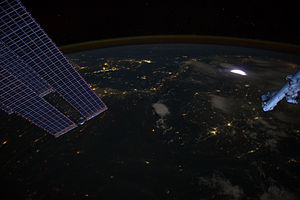 A sprite seen from the International Space Station (top right).

Sprites are large-scale electrical discharges that occur high above thunderstorm clouds, or cumulonimbus, giving rise to a quite varied range of visual shapes flickering in the night sky. They are triggered by the discharges of positive lightning between an underlying thundercloud and the ground.

Sprites appear as luminous reddish-orange flashes. They often occur in clusters within the altitude range 50–90 km (31–56 mi) above the Earth's surface. Sporadic visual reports of sprites go back at least to 1886, but they were first photographed on July 6, 1989 by scientists from the University of Minnesota and have subsequently been captured in video recordings many thousands of times. 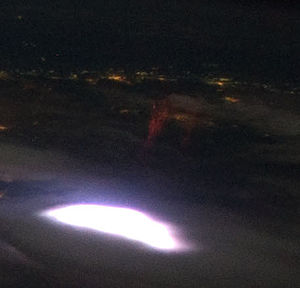 ISS sprite image above; zoomed in

Allusions to transient optical phenomena above thunderclouds can be found in anecdotal reports from as early as 1730 (see Johann Georg Estor). Nobel laureate C. T. R. Wilson had suggested in 1925, on theoretical grounds, that electrical breakdown could occur in the upper atmosphere, and in 1956 witnessed what possibly could have been a sprite. They were first documented photographically on July 6, 1989 when scientists from the University of Minnesota, using a low-light video camera, accidentally captured the first image of what would subsequently become known as a sprite.[1] Several years after their discovery they were named sprites (air spirits) after their elusive nature.[2] Since their 1989 discovery, sprites have been imaged tens of thousands of times, from the ground, from aircraft and from space, and have become the subject of intensive investigations. 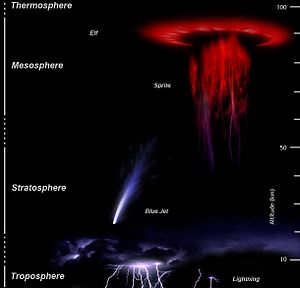 Different types of electrical phenomena in the atmosphere

Sprites have been observed over North America,[3] Central America, South America,[4] Europe,[5] Central Africa (Zaire), Australia, the Sea of Japan and Asia and are believed to occur during most large thunderstorm systems.

Three types of sprites have been categorized by Matthew 'Geoff' McHarg Ph.D. (U.AK) of the US AirForce Research Academy (and NASA).[6] Using an image intensifier on the front of super slow motion camera McHarg and his researchers have named the sprites based on their visual appearance.

Sprites are colored reddish-orange[2] in their upper regions, with bluish hanging tendrils below, and can be preceded by a reddish halo. They last longer than normal lower stratospheric discharges, which last typically a few milliseconds, and are triggered by the discharges of positive lightning between the thundercloud and the ground.[7] They often occur in clusters of two or more, and typically span the altitude range 50 to 90 kilometres (31 to 56 mi), with what appear to be tendrils hanging below, and branches reaching above.[2] 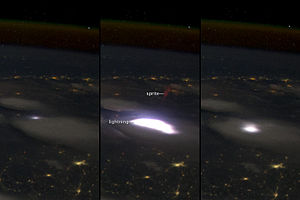 A sprite over Malaysia, as seen from the International Space Station

Optical imaging using a 10,000 frame-per-second high speed camera shows that sprites are actually clusters of small, decameter-sized (10–100 m or 33–328 ft) balls of ionization that are launched at an altitude of about 80 km (50 mi) and then move downward at speeds of up to ten percent the speed of light, followed a few milliseconds later by a separate set of upward moving balls of ionization.[8] Sprites may be horizontally displaced by up to 50 km (31 mi) from the location of the underlying lightning strike, with a time delay following the lightning that is typically a few milliseconds, but on rare occasions may be up to 100 milliseconds.

This footage from the ISS shows a red sprite over East Asia at around 0:06.

In order to film sprites from Earth, special conditions must be present: 150–500 km (93–311 mi) of clear view to a powerful thunderstorm with positive lightning between cloud and ground, red-sensitive recording equipment, and a black unlit sky.[9]

Sprites are sometimes preceded, by about 1 millisecond, by a sprite halo, a pancake-shaped region of weak, transient optical emissions approximately 50 kilometres (31 mi) across and 10 kilometres (6.2 mi) thick. The halo is centered at about 70 kilometres (43 mi) altitude above the initiating lightning strike. These halos are thought to be produced by the same physical process that produces sprites, but for which the ionization is too weak to cross the threshold required for streamer formation. They are sometimes mistaken for ELVES, due to their visual similarity and short duration.[10][11][12]

Research carried out at Stanford University in 2000 indicates that, unlike sprites with bright vertical columnar structure, occurrence of sprite halos is not unusual in association with normal (negative) lightning discharges.[12] Research in 2004 by scientists from Tohoku University found that very low frequency emissions occur at the same time as the sprite, indicating that a discharge within the cloud may generate the sprites.[13]

Sprites have been blamed for otherwise unexplained accidents involving high altitude vehicular operations above thunderstorms. One example of this is the malfunction of a NASA stratospheric balloon launched on June 6, 1989 from Palestine, Texas. The balloon suffered an uncommanded payload release while flying at 120,000 feet (37,000 m) over a thunderstorm near Graham, Texas. Months after the accident, an investigation concluded that a "bolt of lightning" traveling upward from the clouds provoked the incident.[14] The attribution of the accident to a sprite was made retroactively, since this term was not coined until late 1993.