He ruled Serbia until his abdication in 1282, when he became ill. He continued to rule the royal domains of Syrmia as King of Syrmia, and his younger brother succeeded him as ruler of Serbia. Later he became a monk and changed his name to Teokist. In the list of Serbian saints, Stefan Dragutin is venerated on 12 November or 30 October (Old Style and New Style dates).

Dragutin was the eldest son of king Stefan Uroš I of Serbia by Helen of Anjou. He married Catherine, daughter of Hungarian king Stephen V. He was the leading Hungarian proponent in Serbian politics, and because of this he came in conflict with his father, from whom he then usurped the throne in 1276 with help of Hungary, after a clash with his forces at Battle of Gacko. 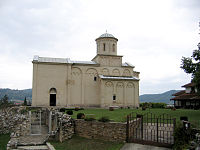 Dragutin divided the kingdom in three parts: Queen Helen held Zeta, Trebinje, Plav and Poibarje; his younger brother, Stefan Milutin, held the southern lands, while Dragutin held for held for himself the larger, northern part.[2] He began to attack the Byzantine Empire but had no success.

In 1282 he broke his leg while hunting and became ill; he passed the throne to his younger brother Stefan Milutin at the council at Deževo 1282, while keeping for himself some northern parts of the country. Since his son Vladislav married the relative of a Hungarian king, Dragutin in 1284 gained from Ladislaus IV of Hungary areas of Mačva with Belgrade, and the Bosnian areas Soli and Usora, which he ruled until 1316, establishing family relations with Bosnian ban Stephen I. His new state was named Kingdom of Srem. The first capital of his state was Debrc (between Belgrade and Šabac), and later he moved his residence to Belgrade. He is the first of the Serb rulers who ruled from the capital of Belgrade. 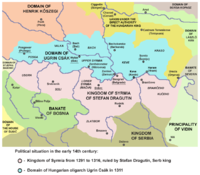 In that time the name Srem was designation for two territories: Upper Srem (present day Srem) and Lower Srem (present day Mačva). Kingdom of Srem under the rule of Stefan Dragutin was actually Lower Srem. Some historical sources mention that Stefan Dragutin also ruled over Upper Srem and Slavonija, but the other sources mention another local ruler who ruled over Upper Srem. The name of this ruler was Ugrin Csák.

Near the end of the 13th century Stefan Dragutin expanded his territory, adding Braničevo and Kučevo. He came into conflict with his brother Milutin when Milutin wanted to create stronger political ties with the Byzantine Empire and obviously did not intend to give the throne to Dragutin's son Vladislav as agreed. Conflict between the brothers was calmed by the clergy in 1313. Near the end of his life he separated from his Hungarian friends and strengthened his connections in Serbia. He later became a monk and changed his name to Teoktist. He died in 1316 and was buried in the Đurđevi Stupovi monastery near Novi Pazar. After Dragutin died, his son Stefan Vladislav II became the new ruler of the Kingdom of Srem.

His legacy includes some splendid monasteries, most notable among them: monastery Mala Remeta on Fruška Gora, dedicated to the Shroud of the Mother of God; St. Achillios church near Arilje (1296); and a monastery Đurđevi stupovi with St. George church in Ras (now Novi Pazar), where he was buried.

His marriage in about 1268 with Katarina, daughter of Stephen V of Hungary and Elizabeth the Cuman, produced three sons:[3][better source needed][4]

And several daughters, among whom Elizabeth (Jelisaveta), is known.