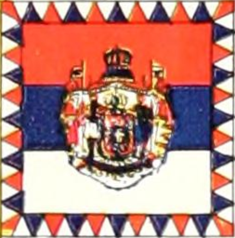 Royal Standard of the King of Serbia

This is an archontological list of Serbian monarchs, containing monarchs of the medieval principalities, to heads of state of modern Serbia.

The Serbian monarchy dates back to the Early Middle Ages. The Serbian royal titles used include Prince, Grand Prince, King, Emperor and Despot.

The Vlastimirović dynasty was the first royal dynasty of the Serb people. Emperor Constantine VII Porphyrogenitus (r. 913–959) mentions that the Serbian throne is inherited by the son, i.e. the first-born,[1] though in his enumeration of Serbian monarchs, on one occasion there was a triumvirate.[2] The Serbs established several polities by the 10th century: Serbia or Zagorje (hinterlands) which consisted of Serbia (known as "Rascia" in historiography of the High Middle Ages), and Bosnia; and Pomorje (maritime) which consisted of Dioclea, Zachlumia, Pagania, Travunia (including Kanalitai). The Serbian ruler was titled archon, "prince".

The history of the dynasty starts with the eponymous founder Vlastimir. This era is marked by the Christianization of Serbs, the many internal and external wars (Bulgars, Magyars), and the power struggle between Bulgaria and the Byzantine Empire in which Serbia found itself in the middle. The history of this dynasty ends with the annexation of Serbia in 969.

With the annexation of Rascia, the previous crownland and seat of Serbia, the county around the city of Doclea emerges into a Principality, where the leaders adopt the title archon of Serbs (signifying supreme leadership among Serbs) alongside their given offices under Byzantine overlordship. The first office-holder was Peter of Diokleia, of which we only have a seal found in the 19th century. The next known is Jovan Vladimir, who became a Bulgarian vassal. Stefan Vojislav succeeds in giving the realm independence, he is the eponymous founder of the Vojislavljevići that ruled Duklja from the early 11th century up to the 1120s. The dynasty may have been a cadet branch of the preceding Vlastimirovićs.

In the mid-11th century, Mihailo I had liberated Rascia from Byzantine rule, and appointed his son Petrislav to rule as Prince, independently. In 1083, Constantine Bodin appoints brothers Vukan and Marko, sons of Petrislav, as rulers of Rascia. In 1089, the Byzantines capture Bodin, and Vukan retains independence, founding the Vukanović dynasty. The Vukanovići quickly claim the following Serbian domains in the following decades, and by 1148, the maritime possessions are united with the inland. The Byzantine Empire at times intervened in the political scene, and at times Serbia had Hungary as its main ally. The dynasty ruled until 1165, when a dynastic branch is instated by the Byzantines.

After Desa's revolt, in 1165 the Byzantium divided the Serb lands between the four sons of Zavida: Tihomir in Raška, Stracimir in Duklja, Miroslav in Zahumlje and Travunia, and Stefan Nemanja in Toplica (in today's central Serbia). Stefan Nemanja rebelled against his eldest brother Tihomir in 1166, who fled with his brothers Stracimir and Miroslav to Byzantium to seek help. But later on, Stefan Nemanja defeated his Greek army of mercenaries in the same year near the town of Pantino on Kosovo in which poor Tihomir drowned in the River of Sitnica. Nemanja captured his other brothers and made peace with them by giving them rule in their former parts of the land to recognise him as the only ruler of Rashka or Serbia. The Nemanjić dynasty was named after Stefan Nemanja and ruled over Serbia until 1371.

Coat of Arms of the Nemanjić dynasty

The crumbling Serbian Empire under Uroš the Weak was to be of little resistance to the powerful Ottoman Empire. In light of conflicts and decentralization of the realm, the Ottomans defeated the Serbs at the Battle of Maritsa in 1371, making vassals of the southern governors, soon thereafter, the Emperor died. As Uroš was childless and the nobility could not agree on the rightful heir, the Empire was ruled by semi-independent provincial lords, who often were in feuds with each other. The most powerful of these, Tsar Lazar, a Duke of present-day central Serbia (which had not yet come under the Ottoman yoke), stood against the Ottomans at the Battle of Kosovo in 1389. The result was indecisive, but it resulted in the subsequent fall of Serbia.

The administration was divided in the following:

The Branković family descends from the Nemanjići and the Lazarevići via female line. The family rises to prominence during the time of disintegration of the Serbian Empire under the last Nemanjić. The original family domains were centred around Kosovo region, one of the heartlands of medieval Serbian state. Later members of the house extended their rule over all remaining independent regions of Serbia making them the last suzerain rulers of medieval Serbia. The dynasty ruled the Serbian Despotate from 1427 to 1459.

Governors of Serbia under the Habsburg Monarchy

In 1918, Serbia became part of the newly formed Kingdom of Serbs, Croats and Slovenes. Later that state changed name in the Kingdom of Yugoslavia (i.e. Kingdom of South Slavs). In that period (between World War I and World War II) the country was a parliamentary monarchy nominally ruled by the Karađorđević dynasty.

After World War II and the civil war Yugoslavia became a communist state, Socialist Federal Republic of Yugoslavia, ruled by Josip Broz Tito. After his death in 1980, the federation started a process of dissolution which finished in a series of civil wars in the early 1990s. Through the 1990s, Serbia and Montenegro comprised the Federal Republic of Yugoslavia, which was restructured in 2003 into a confederation called Serbia and Montenegro. The state union ended with Montenegro's separation in 2006. Currently Serbia is a parliamentary republic.