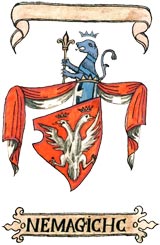 Coat of arms attributed to the Nemanjić dynasty in the Fojnica Armorial, based on the Ohmućević Armorial (late 16th century). The double-headed eagle is attested for the flag of the medieval kingdom of Serbia by Angelino Dulcert (1339).

The Nemanjić (pronounced [nɛ̌maɲitɕ], Serbian: pl. Немањићи, Nemanjići) was the most important dynasty of Serbia in the Middle Ages, and one of the most important in Southeastern Europe. The royal house produced eleven Serbian monarchs between 1166 and 1371. Its progenitor was Stefan Nemanja, who descended from a cadet line of the Vukanović dynasty (1101–1166). After Nemanja, all monarchs used Stefan as a personal name, a tradition adopted for the royal pretensions. The monarchs began as Grand Princes, and with the crowning of Stefan Nemanjić in 1217, the realm was promoted to a Kingdom, and the Serbian Church was established. In 1346, Stefan Dušan was crowned Emperor of the Serbs and Greeks, and the Archbishopric of Serbia was elevated to a Patriarchate. In 1371, with the death of child-less Uroš the Weak (r. 1355–1371), the fall of the Serbian Empire was ensured; provincial lords obtained the rule of the past provinces, and the Nemanjić survived only through maternal lines in several Serbian houses.

The Serbs, as Slavs in the vicinity of the Byzantine Empire, lived in so-called Sklavinia ("Slav lands"), territories initially out of Byzantine control and independent.[1] In the 8th century, the Vlastimirović Dynasty established the Serbian Principality. In 822, Serbia "stretched over the greater part of Dalmatia",[2] and Christianity was adopted as state-religion in circa 870.[3] In the mid-10th century the state had emerged into a tribal confederation that stretched to the shores of the Adriatic Sea by the Neretva, the Sava, the Morava, and Skadar.[4] The state disintegrated after the death of the last known Vlastimirid ruler – the Byzantines annexed the region and held it for a century, until 1040 when the Serbs under the Vojislavljević Dynasty revolted in Duklja (Pomorje).[5] In 1091, the Vukanović Dynasty established the Serbian Grand Principality, based in Rascia (Zagorje).[5] The two halves were reunited in 1142.[6]

In 1166, Stefan Nemanja took the throne, marking the beginning of Serbia, henceforth under the rule of the Nemanjići (Vukanović branch).[7]

Serbia under the Nemanjić dynasty 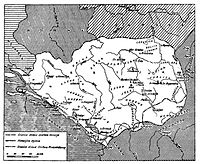 Serbia, 1150–1220, during the rule of Stefan Nemanja and Stefan the First-Crowned

Serbia reached its height of power during the Nemanjić dynasty. The Serbian Kingdom was proclaimed in 1217, leading to the establishment of the Serbian Orthodox Church in 1219. In the same year Saint Sava published the first constitution in Serbia: St. Sava's Nomocanon.

Tsar Stefan Dušan proclaimed the Serbian Empire in 1346. During Dušan's rule, Serbia reached its territorial, political, and economical peak, proclaiming itself as the successor of the Byzantine Empire, and was the most powerful Balkan state of that time. Dušan enacted an extensive constitution, known as Dušan's Code, opened new trade routes, and strengthened the state's economy. Serbia flourished, becoming one of the most developed countries and cultures in Europe. Medieval Serbia had a high political, economic, and cultural reputation in Europe.[citation needed] The Serbian identity has been profoundly shaped by the rule of this dynasty and its accomplishments, and the Serbian Orthodox Church has assumed the role of the national spiritual guardian. 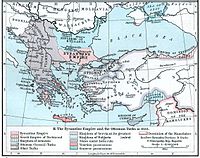 Stefan Dušan attempted to organize a Crusade with the Pope against the threatening Turks, but he died suddenly in December 1355 at the age 47. He was succeeded by his son Uroš, called the Weak, a term that might also apply to the state of the empire, which slowly slid into a feudal anarchy. This was a period marked by the rise of a new threat: the Ottoman Turk sultanate, which spread from Asia to Europe. The Ottomans conquered Byzantium and then the other states in the Balkans. 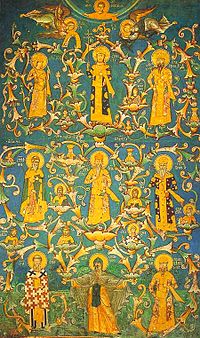 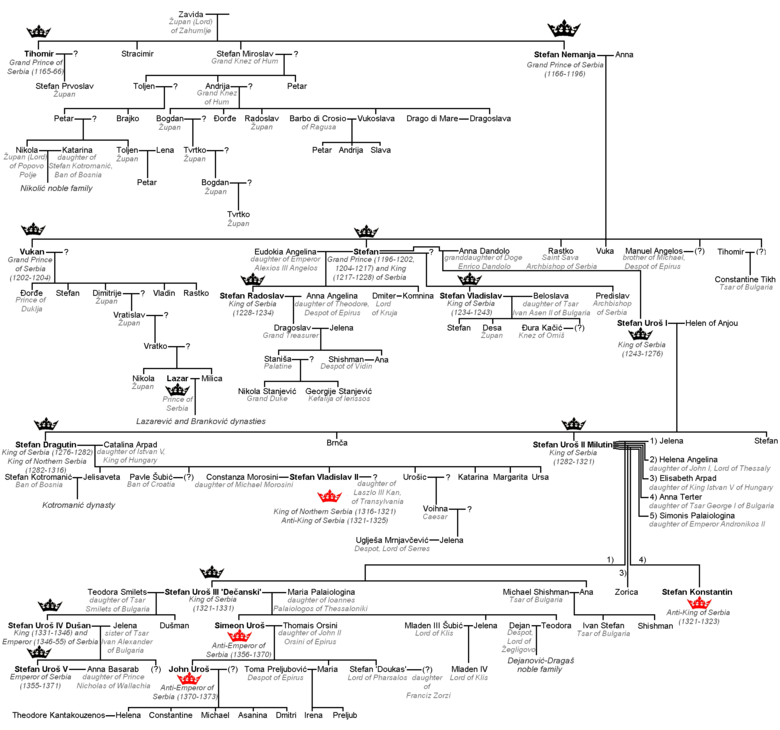 Family tree of the Nemanjić dynasty