The Taurus Mountains (Turkish: Toros Dağları, Ancient Greek: Όρη Ταύρου) are a mountain complex in southern Turkey, dividing the Mediterranean coastal region of southern Turkey from the central Anatolian Plateau. The system extends along a curve from Lake Eğirdir in the west to the upper reaches of the Euphrates and Tigris rivers in the east. It is a part of the Alpide belt in Eurasia.

The Taurus mountains are divided into three chains from west to east as follows; 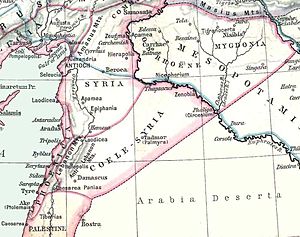 Amanus Mts. near the Gulf of Issus and Antioch

The bull was commonly the symbol and depiction of ancient Near Eastern storm gods, hence Taurus the bull, and hence the name of the mountains. The mountains are a place of many ancient storm-god temples.[1] Torrential thunderstorms in these mountains were deemed by the ancient Syrians to be the work of the storm-god Adad to make the Tigris and Euphrates rivers rise and flood and thereby fertilise their land.[2] The Hurrians, probably originators of the various storm-gods of the ancient Near East, were a people whom modern scholars place in the Taurus Mountains at their probable earliest origins.

A Bronze Age archaeological site, where early evidence of tin mining was found, is at Kestel.[3][page needed] The pass known in antiquity as the Cilician Gates crosses the range north of Tarsus.

The Amanus range in southern Turkey is where the Taurus Mountains are pushed up as three tectonic plates come together. The Amanus is a natural frontier: west is Cilicia, east is Syria. There are several passes, like the Amanian Gate (Bahçe Pass), which are of great strategical importance. In 333 BCE at the Battle of Issus, Alexander the Great defeated Darius III Codomannus on the foothills along the coast between these two passes.[4] In the Second Temple period, Jewish authors seeking to establish with greater precision the geographical definition of the Promised Land, began to construe Mount Hor as a reference to the Amanus range of the Taurus Mountains, which marked the northern limit of the Syrian plain.[5]

During World War I, the German and Turkish railway system through the Taurus Mountains proved to be a major strategic objective of the Allies. This region was specifically mentioned as a strategically controlled objective slated for surrender to the Allies in the Armistice, which ended hostilities against the Ottoman Empire.[6]

In the Aladaglar and Bolkar mountains, limestone has eroded to form karstic landscapes of waterfalls, underground rivers, and some of the largest caves of Asia. The Manavgat River originates on the southern slopes of the Beydaglari range.[7]

In addition to hiking and mountain climbing,[8] there are two ski resorts on the mountain range, one at Davras about 25 km (16 mi) from the two nearest towns of Egirdir and Isparta, the second is Saklıkent 40 km (25 mi) from the city of Antalya.

The Varda Viaduct, situated on the railway lines Konya-Adana at Hacıkırı village in Adana Province, is a 98 m (322 ft) high railway bridge constructed in the 1910s by Germans.

West Taurus and Taurus Mountains form an arc around the Gulf of Antalya. The East Taşeli Plateau and Goksu River divide it from the Central Taurus Mountains. It has many peaks rising above 3,000–3,700 m (9,800–12,100 ft). The complex is divided into four ranges:[8]

The Southeastern Taurus mountains form the northern boundary of the Southeastern Anatolia Region and North Mesopotamia. They are also the source of the Euphrates River and Tigris River.