Konya (Turkish pronunciation: [ˈkon.ja]; Greek: Ικόνιον Ikónion, Latin: Iconium) is a city in the Central Anatolia Region of Turkey. It is the seventh most populous city in Turkey. As of 2014, Konya has a population of 1,174,536.[1] Konya is an economically and industrially developed city [2][3][4] and the capital of Konya Province.

Konya was historically the capital of the Seljuq Sultanate of Rum and the Karamanids.

Konya, was known in classical antiquity and during the medieval period as Ἰκόνιον (Ikónion) in Greek (with regular Medieval Greek apheresis Kónio(n)) and as Iconium in Latin. This name is commonly explained as a derivation from εἰκών (icon), as an ancient Greek legend ascribed its name to the "eikon" (image), or the "gorgon's (Medusa's) head", with which Perseus vanquished the native population before founding the city.[5] In some historic English texts, the city's name appears as Konia or Koniah. 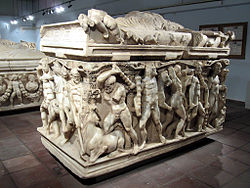 Excavations have shown that the region was inhabited during the Late Copper Age, around 3000 BC.[5] The city came under the influence of the Hittites around 1500 BC. These were overtaken by the Sea Peoples around 1200 BC.

The Phrygians established their kingdom in central Anatolia in the 8th century BC. Xenophon describes Iconium, as the city was called, as the last city of Phrygia. The region was overwhelmed by Cimmerian invaders c. 690 BC. It was later part of the Persian Empire, until Darius III was defeated by Alexander the Great in 333 BC.

Alexander's empire broke up shortly after his death and the town came under the rule of Seleucus I Nicator. During the Hellenistic period the town was ruled by the kings of Pergamon. As Attalus III, the last king of Pergamon, was about to die without an heir, he bequeathed his kingdom to the Roman Republic. During the Roman Empire, under the rule of emperor Claudius, the city's name was changed to Claudioconium, and during the rule of emperor Hadrianus to Colonia Aelia Hadriana.

The apostles Paul and Barnabas preached in Iconium during their first Missionary Journey in about 47–48 AD (see Acts 13:51, Acts 14:1–5 and Acts 14:21), having been persecuted in Antioch, and Paul and Silas probably visited it again during Paul's Second Missionary Journey in about 50 (see Acts 16:2).[6] Their visit to the synagogue of the Jews in Iconium divided the Jewish and non-Jewish communities between those who believed Paul and Barnabas' message and those who did not believe, provoking a disturbance during which attempts were made to stone the apostles. They fled to Lystra and Derbe, cities of Lycaonia. Paul recalled this experience in his second letter to Timothy (Acts 14:1–5), Albert Barnes therefore suggesting that Timothy had been present with Paul in Iconium, Antioch and Lystra.[7]

In Christian legend, based on the apocryphal Acts of Paul and Thecla, Iconium was also the birthplace of Saint Thecla.

During the Byzantine Empire the town was destroyed several times by Arab invaders in the 7th–9th centuries. 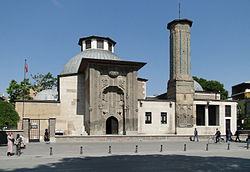 The Seljuks unsuccessfully attempted to conquer the area in the Battle of Iconium (1069). A period of chaos overwhelmed Anatolia after the Battle of Manzikert in 1071, won by the Seljuks.

The name of the town was changed to Konya (in Persian: قونیه‎‎ qawniyya) by Mesud I in 1134.[citation needed] 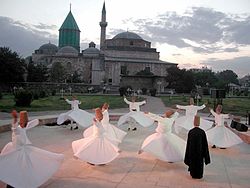 Established in 1273, the Sufi Mevlevi Order and its Whirling Dervishes are among the renowned symbols of Konya and Turkey.

Konya reached the height of its wealth and influence in the second half of the 12th century when the Seljuk sultans of Rum also subdued the Anatolian beyliks to their east, especially that of the Danishmends, thus establishing their rule over virtually all of eastern Anatolia, as well as acquiring several port towns along the Mediterranean (including Alanya) and the Black Sea (including Sinop) and even gaining a momentary foothold in Sudak, Crimea. This golden age lasted until the first decades of the 13th century.[citation needed]

Many Persians and Persianized Turks from Persia and Central Asia migrated to Anatolian cities either to flee the invading Mongols or to benefit from the opportunities for educated Muslims in a newly established kingdom.[9] By the 1220s, the city of Konya was filled with refugees from the Khwarezmid Empire. Sultan Kayqubad I fortified the town and built a palace on top of the citadel. In 1228 he invited Bahaeddin Veled and his son Rumi, the founder of the Mevlevi order, to settle in Konya.[citation needed]

In 1243, following the Seljuk defeat in the Battle of Köse Dağ, Konya was captured by the Mongols as well. The city remained the capital of the Seljuk sultans, vassalized to the Ilkhanate until the end of the century.[citation needed]

In this era (13th century) Persian was the main language of people of Konya.[10][11] Persian refugees fled the Mongols to Konya. One of these refugees was Persian poet Rumi. The city is still influenced by Persian culture, such as Cult of Dervishes and Islamic mysticism rooted in eastern Iran.[12]

During Ottoman rule, Konya was administered by the Sultan's sons (Şehzade), starting with Şehzade Mustafa and Şehzade Cem (the sons of Sultan Mehmed II), and later the future Sultan Selim II. Between 1483 and 1864, Konya was the administrative capital of Karaman Eyalet. During the Tanzimat period, as part of the vilayet system introduced in 1864, Konya became the seat of the larger Vilayet of Konya which replaced Karaman Eyalet.

Konya had a major air base during the Turkish War of Independence. In 1922, the Air Force was renamed as the Inspectorate of Air Forces[13] and was headquartered in Konya.[14][15] The Third Air Wing[16] of the 1st Air Force Command[17] is based at the Konya Air Base. The wing controls the four Boeing 737 AEW&C Peace Eagle aircraft of the Turkish Air Force.[18][19]

Konya was a center for agriculture at the turn of the 20th century.[citation needed] Since the late 20th century, the economy has diversified.

The Meram highway was constructed in 1950.[citation needed]

The first Konya National Exhibition and Fair was held in 1968.[citation needed]

The Koyunoğlu Museum was donated to the city in 1973 and it reopened in a new building.[citation needed] 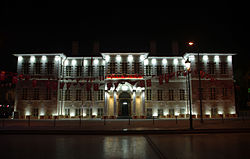 Konya is the center of the largest province, and is among the largest cities in the country. It is the seventh most populated city in Turkey.[21] 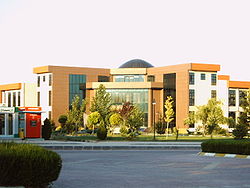 Library of Selçuk University in Konya

Konya is one of the few cities[citation needed] to contain more than 100,000 college students. Selçuk University had the largest number of students, 76,080, of any public university in Turkey during the 2008-09 academic year.[24] It was founded in 1975. The other public university is Necmettin Erbakan University which was established in Konya in 2010.[25]

Private colleges in Konya include the KTO Karatay University and Mevlana University.[26][27] 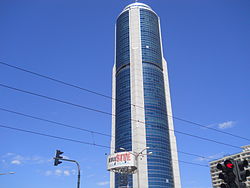 The city ranks among the Anatolian Tigers.[2][3][4] There are a number of industrial parks.[28] In 2012 Konya's exports reached 130 countries.[28] A number of Turkish industrial conglomerates, such as Kombassan Holding, have their headquarters in Konya.[29]

While agriculture-based industries play a role, the city's economy has evolved into a center for the manufacturing of components for the automotive industry; machinery manufacturing; agricultural tools; casting industry; plastic paint and chemical industry; construction materials; paper and packing industry; processed foods; textiles; and leather industry.[28] 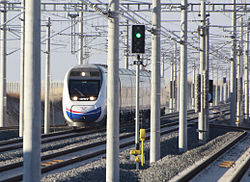 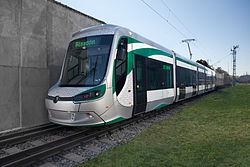 A Škoda 28 T tram produced for the Konya Metropolitan Municipality

The bus station has connections to a range of destinations, including Istanbul, Ankara and İzmir.

Konya has a tramway network in the city center, on which the Škoda 28 T trams are being used.[30]

Konya is connected to Ankara, Eskişehir and Istanbul via the high-speed railway services of the Turkish State Railways.[31][32] 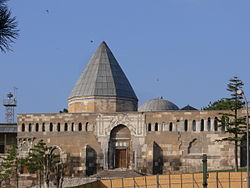 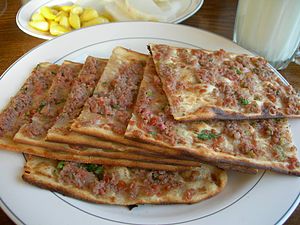 Etli ekmek is a local dish of Konya 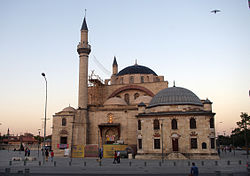 Konya was the final home of Rumi (Mevlana), whose tomb is in the city. In 1273, his followers in Konya established the Mevlevi Sufi order of Islam and became known as the Whirling Dervishes. Konya has the reputation of being one of the more religiously conservative metropolitan centers in Turkey. It was once known as the "citadel of Islam" and its inhabitants are still comparatively more devout than those from other cities.[36]

Konya produced Turkish carpets that were exported to Europe during the Renaissance.[37][38] These expensive, richly patterned textiles were draped over tables, beds, or chests to proclaim the wealth and status of their owners, and were often included in the contemporary oil paintings as symbols of the wealth of the painter's clients.[39]

A Turkish folk song is named "Konyalım", making reference to a loved one from Konya.[40]

The local cuisine of Konya includes dishes made of bulgur wheat and lamb meat.[41] One of the renowned dishes of the city is etli ekmek, which is similar to lahmacun and pizza.[41]

Konya is twinned with: