From Infogalactic: the planetary knowledge core
Jump to: navigation, search
For other uses, see trim (disambiguation).

Trim (Irish: Baile Átha Throim, meaning "town at the ford of elderflowers")[3] is a town in County Meath, Ireland. It is situated on the River Boyne and has a population of 8,268. The town is noted for Trim Castle - the largest Cambro-Norman castle in Ireland. It was once the county town but today that honour belongs to Navan. One of the two cathedrals of the United Dioceses of Meath and Kildare - St Patrick's cathedral - is located north of the river. Trim won the Irish Tidy Towns Competition in 1972 and 1984 and was the joint winner with Ballyconnell in 1974.

At an early date, a monastery was founded at Trim, which lay within the petty kingdom (tuath) of the Cenél Lóegairi. It is traditionally thought to have been founded by St. Patrick and left in the care of its patron saint Lommán, also locally known as Loman, who flourished sometime between the 5th and early 6th century.[4] When domestic politics endangered the position of Lommán's foundation, the church of Armagh assimilated Lommán into the dossier of St. Patrick, making him a disciple of that saint.[4] Attackers burned the church several times in the twelfth century, during which it was refounded as an St. Mary's Abbey under Augustinian rule. The abbey church was the sanctuary for "Our Lady of Trim", a wooden statue reported to work miracles. The statue made Trim a major pilgrimage site from at least 1397. During the Reformation the statue was burned and Henry VIII dissolved the abbey. The abbey's bell tower, the "Yellow Steeple", is the primary remnant of St. Mary's.

With the spelling "Áth Truim", the bishopric is today listed by the Catholic Church as a titular see.[5] Since it is not mentioned in either of the lists of the reduced number of sees approved by the Synod of Ráth Breasail (1111) and the Synod of Kells (1152), it was one of the monastic establishments that were no longer recognized as seats of bishops after the 12th-century reorganization of the Church in Ireland. Its territory was joined to that of Meath Diocese.

Lying 61 m above sea level on the River Boyne, Trim became one of the most important Hiberno-Norman settlements in the Middle Ages. In the 15th century the Norman-Irish parliament met in Trim. Arthur Wellesley, 1st Duke of Wellington is reputed to have been born in Dangan Castle between Trim and Summerhill, and a large column to him was erected in the town in 1817. The town's main feature is Ireland's largest Norman castle, Trim Castle; other features include two ruined church complexes, the Boyne River for fishing, and the Butterstream Gardens, visited by Charles, Prince of Wales in the mid-nineties (no longer open to the public). 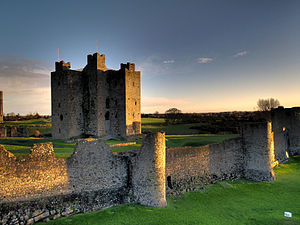 Trim Castle (or King John's Castle) is Ireland's largest Norman castle. It was built in the late 12th century following the Norman invasion of Ireland. Trim and the surrounding lands were granted to Hugh de Lacy, Lord of Meath, a Norman baron. Richard II of England stayed there before being ousted from power. Once a candidate to be the country's capital, the town has also occupied a role as one of the outposts of the Pale, and sessions of the Irish Parliament were sometimes held here, as in 1542. It was also designated by Elizabeth I of England as the planned location for a Protestant Dublin University (known as Trinity College, Dublin).[6] However this was revised by Sir Francis Drake, who advocated the case for locating the University in Dublin. In 1649 after the sacking of Drogheda, the garrison of Trim fled to join other Irish forces and the town was occupied by the army of Oliver Cromwell. There were many local disturbances in neighbouring villages in the Irish Rebellion of 1798, most infamously the battle on the Hill of Tara, following the dispersal of the Wexford rebellion. Trim was represented by Arthur Wellesley in the Irish Parliament from 1790 to 1797.

The 19th century saw the construction of Trim Courthouse, St. Loman's Catholic church, St. Patrick's Anglican church, the Wellington column, the current Bank of Ireland building, and Castle Street by Lord Dunsany, a major landowner. Following the Great Irish Famine of 1846–1849, the practices of agriculture in the hinterland altered, with a change in emphasis from tillage to stock raising. This resulted in a change in the business life of Trim. Trim developed as a market town for the productive agricultural hinterland. Some small-scale local industries were developed including envelope, and leather product manufacturing. Trim was also chosen as location for the Timoney Engineering company to make Fire Tenders. However, in the main the town continued to mainly be a service centre for its immediate area.

During the Irish War of Independence, local companies of the Irish Republican Army took Trim RIC Barracks, a large structure located on the current site of the Castle Arch Hotel, secured the arms from the barracks and then burnt down the Barracks. A large part of the town was burned as a reprisal by the British Crown forces on 26 September 1920.[7] The local members were drawn from Trim, Longwood, Ballivor and South Meath in general. The Lalor brothers form Castle St. were prominent members as well as the Duignans from High St and the Proctors. Records of the adventures of the Lalors rest in Navan library and recount the tales of one of the brothers hiding in the recently dug grave of Fr. Woods in the churchyard. Local memories recall the townspeople sheltering down by the Boyne for a few nights as the Black 'n' Tans and Auxiliaries burnt out prominent businesses and the town hall. Footage of the burning of J&E Smyth can be viewed on the 'Pathe' website. Many of the townspeople were traumatised for the rest of their lives; many children in Trim were not allowed to play with guns; memories of the B'n'Ts dangling grenades outside their windows as the Town Hall burnt and peeled the paint off their doors at Castle St. remained for a long time. The newspapers reported the burning of the barracks and the subsequent looting and burning of the town and follow-up operations by the local IRA.[8]

In later years the Lalors who moved to the house across the road from the old Brothers school had a collection of memorabilia from those years including, letters from Collins sent from Frongoch (they kept the originals and forward duplicates to HQ), Devs slippers and a Tricolour made by Constance Markievicz (with her name embroidered) that was to fly over the GPO during the Rising. Their whereabouts now are unknown but photographs of their existence are on file in Navan library. While other parts of Meath were particularly quiet during the War Of Independence, the men from South Meath took the war to the British; one ambush by one of the Lalor brothers took place at the Wellington Monument, where he single-handedly took on a truckload of British with his rifle and grenade[citation needed], the monument to the British PM still stands.

A new bridge was built on the Boyne in the 1980s to divert heavy traffic from the town. This was then enhanced by the construction, in stages, of an inner relief road, which now makes it possible for heavy traffic to achieve a complete by-pass of the town. The Watergate bridge was replaced in 2005. The local town council purchased a field beside the new bridge in 2004, as it was expected to be of archaeological significance.[citation needed]

As part of the Civil Service decentralization plan of the Irish government, Trim was chosen as the location of the headquarters for the state body known as the Office of Public Works. The movement of this state administration function to Trim resulted in Trim being the first location outside of Dublin to complete a satisfactory decentralization move. Trim has seen some growth in recent years[when?] with growth as a tourist and business centre.

An annual classic car show takes place in Trim every July, Trim Veteran and Vintage Rally has been running since 1985. It started in a small yard on Loman Street with just 1 car. The founder, Norman Pratt, determined to expand the show, approached the Roundtree family who very kindly allowed The Porchfields to be used on the day. It has grown each year since then and there are now in excess of 500 cars and motor cycles on show. Visitors to the show can also try their hand at archery with Athboy Archery Club. The archery has always been a big success at the fair.

Trim Haymaking Festival is held in the town every mid-June. The Porchfields, an amenity space rich in historic value, are home to a fair, market, and cultural displays. The main event is the traditional making of the first hay of the year by hand and by old-style machinery.Visitors to the show can also try their hand at archery with Athboy Archery Club. The archery has always been a big success at the fair.

Because of Jonathan Swift's residence near Trim after 1700, a satirical festival is held in his honour.[9]

The Royal Meath Show takes place annually in porch field on the first Sunday in September each year. The main evert of this agricultural show are judging of cattle sheep goats horses dogs and home industries and there are also trade stands and vintage machinery and many other attractions.

Longwave radio station Atlantic 252's broadcasting station was situated in Trim throughout the 1990s. The station's former buildings are now home to Trim Town Council and Trim Area Committee, two of the administrative bodies within the County of Meath.

The RTÉ Radio 1 longwave transmitter at Clarkstown, some 11 km southeast of Trim, now broadcasts the AM version of Radio 1 (sometimes known as RTÉ Europe) on 252 kHz (1190.4 m). Prior to this date, RTÉ's main AM transmission centre had been near Athlone.

The town has been used as the location for some film productions, including the use of Trim Castle to depict York Castle in Mel Gibson's Braveheart.

Trim was also the setting for the first full-length Irish martial arts movie Fatal Deviation. (A low-budget production from 1998 that tells the story of a young man trying to rebuild his life after returning from reform school only to be harassed by a gang of local drug dealers.)

The 1980 movie The Big Red One, starring Lee Marvin and Mark Hamill, was also partially shot in Trim and in particular at Trim Castle.

The town is home to Meath Gaelic Athletic Association footballers such as Jack Quinn and Darren Fay and in recent times Brendan Murphy has emerged as the county team's star goalkeeper.

Trim is the hometown of current St. Johnstone player Tim Clancy who played for local club Trim Celtic as a youngster. St. Johnstone are based in Perth and play in the Scottish Premier League.

Trim has also become a popular place for activities in recent years including river kayaking with the opening of Boyne Valley Activities in 2011.

Trim railway station was opened on 26 April 1864, closed for goods and passenger traffic in 1947 and finally closed altogether on 1 September 1954.[10]

Bus Éireann operate two routes serving Trim. Route 111 from Athboy to Dublin operates hourly each way,(more often at peak times) and connections to Granard and Cavan are available at Athboy.[11] Route 190 from Trim to Laytown via Navan and Drogheda operates every two hours each way, less often at weekends.[12] Royal Breffni Tours operate a route to Dundalk Institute of Technology [13] and Streamline Coaches operate a route to NUI Maynooth.[14]

Trim Flying Club, a Registered Training Facility (RTF), is based at the aerodrome and operate two aircraft.[15] As well as Trim Flying Clubs' aircraft, the airfield is also home to other general aviation aircraft including microlights.

Ordered chronologically by date of birth

Trim is twinned with: