From Infogalactic: the planetary knowledge core
Jump to: navigation, search
For the Romanian village, see Jupâneşti.

Vidin (Bulgarian: Видин) is a port town on the southern bank of the Danube in north-western Bulgaria. It is close to the borders with Romania and Serbia, and is also the administrative centre of Vidin Province, as well as of the Metropolitan of Vidin (since 870).

An agricultural and trade centre, Vidin has a fertile hinterland renowned for its wines.

The name is archaically spelled as Widdin in English. old name Dunonia itself meant "fortified hill" in Celtic with the typically dun found frequently in Celtic place names.[2]

Vidin is the westernmost important Bulgarian Danube port and is situated on one of the southernmost sections of the river. The New Europe Bridge, completed in 2013, connects Vidin to the Romanian town of Calafat on the opposite bank of the Danube. Previously, a ferry located 2 km (1 mi) from the town was in use for that purpose.

Vidin emerged at the place of an old Celtic settlement known as Dunonia. The settlement evolved into an Roman fortified town called Bononia. The town grew into one of the important centres of the province of Upper Moesia, encompassing the territory of modern north-western Bulgaria and eastern Serbia.

When Slavs settled in the area, they called the town Badin or Bdin, where the modern name comes from. Similarly, Anna Komnene refers to it as Vidynē (Βιδύνη) in the Alexiad. 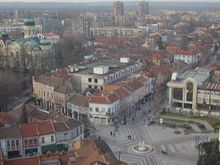 The central streets of Vidin 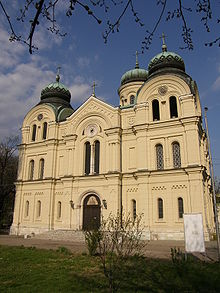 Vidin's main landmark, the Baba Vida fortress, was built in the period from the 10th to the 14th century. In the Middle Ages Vidin used to be an important Bulgarian city, a bishop seat and capital of a large province. Between 971 and 976 the town was the center of Samuil's possessions while his brothers ruled to the south. In 1003 Vidin was seized by Basil II after an eight-month siege because of the betrayal of the local bishop. Its importance once again rose during the Second Bulgarian Empire (1185–1422) and its despots were influential figures in the Empire and were on several occasions chosen for Emperors. From the mid 13th century it was ruled by the Shishman family. In 1356, Bulgarian Tsar Ivan Alexander isolated Vidin from the Bulgarian monarchy and appointed his son Ivan Stratsimir (1356–1396) as absolute ruler of Vidin's new city-state - the Tsardom of Vidin (Bdin / Badin).

The Ottomans went on to conquer the despotates of Dobrudzha, Prilep and Velbazhd as well. Vidin's independence did not last long. In 1396 the Ottomans invaded and turned Vidin into a sanjdak.

In the late years of Ottoman rule, Vidin was the centre of Turkish rebel Osman Pazvantoğlu's breakaway state.

In 1853, The Times of London reported that Widdin, as it was called, was

a considerable town, with a population of about 26,000, and a garrison of 8,000 to 10,000 men. Widdin is one of the important fortified places of the military line of the Danube. It covers the approaches of Servia, commands Little Wallachia, the defiles of Transylvania, and, above all, the opening of the road which leads through Nissia and Sophia on to Adrianople. Its form is an irregular pentagon; it is strongly bastioned, possesses a fortified castle, with two redoubts in the islands, and its defences are completed by an extensive marsh.[3]

During the Serbo-Bulgarian War (1885), the town was besieged by a Serbian army. Although vastly outnumbered, the Bulgarians were victorious.

Vidin has a humid subtropical climate transforming to temperature continental climate. In the winter months, inversions are very common. The average annual temperature is 12.2 °C (54.0 °F).

Vidin is the 20th town by population in Bulgaria, but serious demographic problems have been experienced in the area during the last two decades. The number of the residents of the city reached its peak between 1988 and 1991 when the population exceeded 65,000.[5] As of February 2011, the town has a population of 47,138 inhabitants.[1] The following table presents the change of the population after 1887.

According to the latest 2011 census data, the individuals declared their ethnic identity were distributed as follows:[10][11] 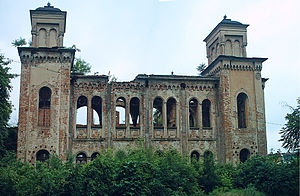 The Vidin Synagogue, deserted after Jewish emigration to Israel.

Vidin maintains two well-preserved medieval fortresses, Baba Vida and Kaleto, as well as many old Orthodox churches such as St Pantaleimon, St Petka (both 17th century), and St Dimitar (Demetrius of Thessaloniki) (19th century), the Vidin Synagogue (1894), the Osman Pazvantoğlu Mosque and library, the late 18th-century Turkish ruler of north-western Bulgaria, the Krastata Kazarma of 1798, and a number of old Renaissance buildings. Also remarkable is the theatre building which was the first Bulgarian theatre in "European model" and was built in 1891.

Another tourist attraction in the Vidin area is the town of Belogradchik, famous for its unique and impressive rock formations, the Belogradchik Rocks and the medieval Belogradchik Fortress and also the nearby Magura Cave with its beautiful prehistoric cave paintings. 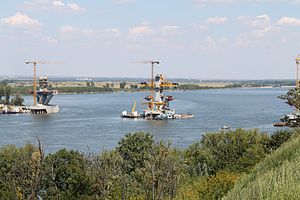 In Vidin is a border-station to neighbouring Romania via the Danube river. It was operated by ferryboats only until 14 June 2013 when the Vidin–Calafat Bridge opened. Crossing by ferry was possible only every ½ hour with just five trucks per ferry. Ticket prices were €50 per truck and €12 per car.

The city has an airport (ICAO code LBVD) a few kilometres to the north-west; as of 2014, there is no scheduled service, and the buildings are in a state of disrepair.

Close to the town lies a powerful medium wave broadcasting station (since 1973) whose signals can be easily received throughout Europe. It works on 576 kHz and on 1224 kHz with a power of 500 kW each. For transmission on 576 kHz a 259-metre-tall (850 ft) guyed mast equipped with a cage antenna at its lower part is used. The transmission of 576 kHz Radio Hristo Botev is on hold for now, because of the world financial crisis and it is unknown when it will resume broadcasting. A powerful FM transmitter on 88.2 MHz provides good coverage for Hristo Botev radio. Only 1224 kHz Radio Bulgaria remains atm. For the transmission on 1224 kHz four guyed masts, insulated against ground, which are each equipped with a cage antenna are used, which allows a switchable directional pattern.

Vidin Heights on Livingston Island in the South Shetland Islands, Antarctica is named after Vidin.

Vidin is twinned with: