From Infogalactic: the planetary knowledge core
Jump to: navigation, search
This article is about the 100-metres race. For lengths on the order of magnitude of 100 metres, see 1 hectometre.

The 100 metres, or 100-meter dash, is a sprint race in track and field competitions. The shortest common outdoor running distance, it is one of the most popular and prestigious events in the sport of athletics. It has been contested at the Summer Olympics since 1896 for men and since 1928 for women.

The reigning 100 m Olympic champion is often named "the fastest man in the world." The World Championships 100 metres has been contested since 1983. Jamaicans Usain Bolt and Shelly-Ann Fraser-Pryce are the reigning world and Olympic champions in the men's and women's 100 metres, respectively.

On an outdoor 400 metres running track, the 100 m is run on the home straight, with the start usually being set on an extension to make it a straight-line race. Runners begin in the starting blocks and the race begins when an official fires the starter's pistol. Sprinters typically reach top speed after somewhere between 50–60 m. Their speed then slows towards the finish line.

The 10-second barrier has historically been a barometer of fast men's performances, while the best female sprinters take eleven seconds or less to complete the race. The current men's world record is 9.58 seconds, set by Jamaica's Usain Bolt in 2009, while the women's world record of 10.49 seconds set by American Florence Griffith-Joyner in 1988 remains unbroken.

The 100 m (109.361 yards) emerged from the metrication of the 100 yards (91.44 m), a now defunct distance originally contested in English-speaking countries. The event is largely held outdoors as few indoor facilities have a 100 m straight. 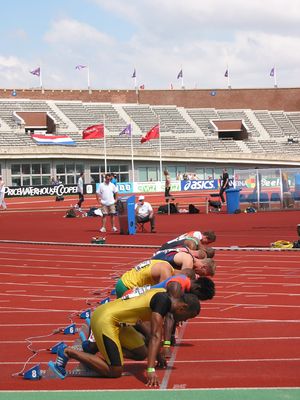 At the start, some athletes play psychological games such as trying to be last to the starting blocks.[1][2][3]

At high level meets, the time between the gun and first kick against the starting block is measured electronically, via sensors built in the gun and the blocks. A reaction time less than 0.1 s is considered a false start. The 0.1-second interval accounts for the sum of the time it takes for the sound of the starter's pistol to reach the runners' ears, and the time they take to react to it.

This rule led to some sprinters deliberately false-starting to gain a psychological advantage: an individual with a slower reaction time might false-start, forcing the faster starters to wait and be sure of hearing the gun for the subsequent start, thereby losing some of their advantage. To avoid such abuse and to improve spectator enjoyment, the IAAF implemented a further change in the 2010 season – a false starting athlete now receives immediate disqualification.[4] This proposal was met with objections when first raised in 2005, on the grounds that it would not leave any room for innocent mistakes. Justin Gatlin commented, "Just a flinch or a leg cramp could cost you a year's worth of work."[5] The rule had a dramatic impact at the 2011 World Championships, when current world record holder Usain Bolt was disqualified.[6][7]

Runners typically reach their top speed just past the halfway point of the race and they progressively decelerate in the later stages of the race. Maintaining that top speed for as long as possible is a primary focus of training for the 100 m.[8] Pacing and running tactics do not play a significant role in the 100 m, as success in the event depends more on pure athletic qualities and technique.

The winner, by IAAF Competition Rules, is determined by the first athlete with his or her torso (not including limbs, head, or neck) over the nearer edge of the finish line.[9] When the placing of the athletes is not obvious, a photo finish is used to distinguish which runner was first to cross the line.

Climatic conditions, in particular air resistance, can affect performances in the 100 m. A strong head wind is very detrimental to performance, while a tail wind can improve performances significantly. For this reason, a maximum tail wind of 2.0 m/s is allowed for a 100 m performance to be considered eligible for records, or "wind legal."

Furthermore, sprint athletes perform better at high altitudes because of the thinner air, which provides less air resistance. In theory, the thinner air would also make breathing slightly more difficult (due to the partial pressure of oxygen being lower), but this difference is negligible for sprint distances where all the oxygen needed for the short dash is already in the muscles and bloodstream when the race starts (explaining why many athletes choose not to breathe for the duration of the race)[citation needed]. While there are no limitations on altitude, performances made at altitudes greater than 1000 m above sea level are marked with an "A."[10]

Only male sprinters have beaten the 100 m 10-second barrier, nearly all of them being of West African descent. Namibian (formerly South-West Africa) Frankie Fredericks became the first man of non-West African heritage to achieve the feat in 1991 and in 2003 Australia's Patrick Johnson (who has Irish and Indigenous Australian heritage) became the first sub-10-second runner without an African background.[11][12][13][14]

In the Prefontaine Classic 2015 Diamond League meet at Eugene, Su Bingtian ran a time of 9.99 seconds, becoming the first Asian athlete to officially break the 10-second barrier. In the 2015 Birmingham Grand Prix Diamond League meet, British athlete Adam Gemili, who is of mixed Iranian and Moroccan descent, ran a time of 9.97 seconds on home soil, becoming the first athlete with either North African or Middle Eastern heritage to break the ten-second barrier.[15] Of the six men's continental record holders, currently three of them were born in Nigeria.

It is believed that biological factors may be largely responsible for the notable success in sprinting events enjoyed by athletes of West African descent. This includes:[16]

Greater body density, which is likely due to higher bone mineral density and heavier bone mass at all stages in life, including infancy (despite evidence of lower calcium intake and a higher prevalence of lactose intolerance, which prevents consumption of dairy products);

Modestly, but significantly, higher levels of plasma testosterone (3-19 percent), which is anabolic, theoretically contributing to greater muscle mass, lower fat, and the ability to perform at a higher level of intensity with quicker recovery;

The ACTN3 protein, a "speed gene" most common among persons of West African descent that renders fast twitch muscle fibers fast. African American 200 m and 400 m world champion Michael Johnson has suggested that the presence of ACTN3 is at the root of the success of these athletes in sprinting events;[17][18]

And finally, a higher percentage of fast-twitch muscle fibers (Type II) and more anaerobic enzymes, which can translate into more explosive energy. The enzyme creatine kinase is abundantly expressed in these fibers. The enzyme rapidly regenerates the biological fuel molecule ATP needed for the sprint. The enzyme has been reported to be twice as high in subjects of sub-Saharan African descent.[19] Creatine kinase is the final common pathway of muscle activity. It is tightly bound to the muscle fibers and directly fuels fast muscle contraction. Therefore, the creatine kinase system is considered to be the major factor, downstream of other factors, that modulates the biological capacity to sprint.[20]

Top sprinters of differing ancestry, such as Christophe Lemaitre, are believed to be exceptions in that they too likely have the genes favourable for sprinting.[18] Colin Jackson, an athlete with mixed ethnic background and former world record holder in the 110 metre hurdles,[21] noted that both his parents were talented athletes and suggested that biological inheritance was the greatest influence, rather than any perceived racial factor. Furthermore, successful black role models in track events may reinforce the racial disparity.[22]

Major 100 m races, such as at the Olympic Games, attract much attention, particularly when the world record is thought to be within reach.

Some records have been marred by prohibited drug use – in particular, the scandal at the 1988 Summer Olympics when the winner, Canadian Ben Johnson was stripped of his medal and world record.

Jim Hines, Ronnie Ray Smith and Charles Green were the first to break the 10-second barrier in the 100 m, all on 20 June 1968, the Night of Speed. Hines also recorded the first legal electronically timed sub-10 second 100 m in winning the 100 metres at the 1968 Olympics. Bob Hayes ran a wind-assisted 9.91 seconds at the 1964 Olympics. 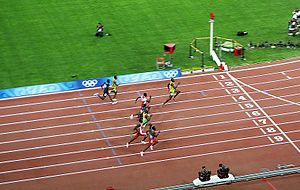 More facts about these male runners 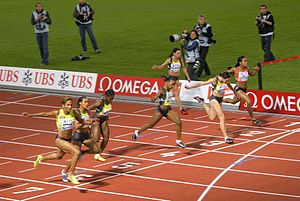 More facts about these female runners 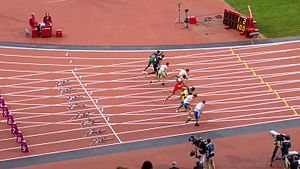 Further information: 100 metres at the Olympics