Alexander William George Duff, 1st Duke of Fife KG KT GCVO VD PC (10 November 1849 – 29 January 1912), styled Viscount Macduff between 1857 and 1879 and known as The Earl Fife between 1879 and 1889, was a British peer who married Princess Louise, the third child and eldest daughter of King Edward VII of the United Kingdom and Queen Alexandra.

Fife was born in Edinburgh, the son of James Duff (a grandson of the 3rd Earl Fife and heir presumptive to his uncle, the 4th Earl Fife) and his wife, the former Lady Agnes Hay, second daughter of the 18th Earl of Erroll and the former Lady Elizabeth FitzClarence (an illegitimate daughter of William IV). When his father succeeded as 5th Earl Fife in 1857, he acquired the courtesy title Viscount Macduff. He attended Eton from 1863 to 1866.

Fife served as Member of Parliament for the Elginshire and Nairnshire constituency, in Scotland, from 1874 to 1879. On 7 August 1879, he succeeded his father as 6th Earl Fife in the Peerage of Ireland (and as 2nd Baron Skene in the Peerage of the United Kingdom, which title gave him a seat in the House of Lords). He served under William Ewart Gladstone as Captain of the Honourable Corps of Gentlemen-at-Arms from 1880 to 1881, and served on a special diplomatic mission to the King of Saxony in 1882. He was also Lord-Lieutenant Elginshire from 1872 to 1902. In 1885, Queen Victoria created him Earl of Fife in the Peerage of the United Kingdom.[1] He helped found the Chartered Company of South Africa, and served as one of its vice presidents until the 1896 Jameson Raid.

On Saturday 27 July 1889, Lord Fife married Princess Louise, the eldest daughter of the then-Prince and Princess of Wales, at the Private Chapel at Buckingham Palace. The couple were third cousins in descent from George III. The wedding marked the second time a descendant of Queen Victoria married a British subject (the first being the marriage of The Princess Louise, the Queen's fourth daughter, to the Duke of Argyll). Two days after the wedding, the Queen elevated Lord Fife to the further dignity of Duke of Fife and Marquess of Macduff, in the County of Banff, in the Peerage of the United Kingdom.[2]

The marriage of the Duke of Fife and Princess Louise produced three children:

In December 1911, while sailing to Egypt on the SS Delhi, the Duke and his family were shipwrecked off the coast of Morocco. They spent some time in the water before being rescued and then had to walk 4 miles to accommodation.[3] Although they escaped unharmed, the Duke fell ill with pleurisy, probably contracted as a result of the shipwreck.

He died at Aswan in Egypt on 29 January 1912, and his elder daughter, Princess Alexandra, succeeded to the 1900 dukedom, becoming Duchess of Fife and Countess of Macduff in her own right.[4] The Duke's other titles, including the 1889 Dukedom, became extinct.

The Duke's body was repatriated to the United Kingdom on ship, in a lead coffin.[3] It rested in the Royal Vault below St George's Chapel, Windsor Castle from 28 February 1912 until 6 August 1912, when it was transferred to Scotland[5] for burial in the Private Chapel, Mar Lodge, Braemar, Aberdeenshire. The Glasgow Herald reported:

ABERDEEN. Thursday. The casket containing the remains of the Duke of Fife was yesterday deposited in the vault specially constructed for its reception within the private chapel at New Mar Lodge, Braemar, his Grace's Highland residence. The date of the removal of the remains from Windsor to their last resting place was kept strictly private until two or three days ago, it being the express wish of the Princess Royal that the interment should be carried out without any public display whatever. The casket arrived at Aberdeen from Euston at 7.15 yesterday morning, being conveyed in a special saloon which at Aberdeen was attached to the 8.5 a.m. train for Ballater. Heavy rain showers had fallen on Deeside in the early morning, and when the train reached Ballater shortly after ten o'clock the atmosphere was depressingly gloomy, while the distant hills to the West were thickly enveloped in mist, adding a further melancholy note to the circumstances attending the sad home-bringing of the departed Chief of the Duffs. Travelling in the special saloon from London to Ballater were Sir Maurice Abbot Anderson and Lady Anderson and Dr Essery, while awaiting the arrival of the train at Ballater were Mr W[illia]m Mackintosh, factor and commissioner on the Mar estates; Mr C. H. Taylor, private secretary to the late Duke; and eight members of the Duff Highlanders, specially selected to transfer the casket from the train to a motor hearse which was in waiting to convey the remains over the 18 odd miles to New Mar Lodge. Many hundreds of residents and visitors to the district had assembled in the Station Square and reverently observed the Highlanders transfer the massive polished oak coffin from the saloon to the hearse. Over the casket was laid a Union Jack, which was the only touch of colour associated with the sombre vehicle.

THE ROUTE TO BRAEMAR.

The cortege covered the route to Braemar at the slow speed of about 12 miles an hour, and along the way there were obvious manifestations of respect shown, for the passing of one who had been a notable personality on Upper Deeside for so many years. Groups of residents waited by the roadside for the cortege to pass, and flags were flying at half-mast from many of the stately country mansions, notably at Old Mar Lodge, which is occupied by the Princess Dolgorouki, where the Russian flag was hanging at half-mast. In the village of Castleton of Braemar there were general signs of mourning. Business was suspended, flags were flying at half-mast, and the general atmosphere of solemnity which pervaded the scene indicated at once the feeling of respect which all classes entertained for the departed nobleman and his bereaved Royal Duchess, who is extremely popular throughout the whole of the Deeside Highlands. The cortege passed through Castleton of Braemar at a smarter pace, the intervening two miles to the Victoria Bridge which spans the Dee at the entrance to the private policies of New Mar Lodge being covered in a few minutes. Awaiting its arrival at the bridge was a large crowd of visitors and others, but from this point absolute privacy was observed so far as the closing scenes of the day's proceedings were concerned. The motor hearse with attendant motor cars passed quickly over the bridge, drawing up on the avenue behind a fringe of stately trees on the north side of the river. In waiting here was a contingent of the Duff Highlanders under command of Mr William Mackintosh, these being joined by special invitation by a representative body of the Balmoral Highlanders under command of Mr John Michie, M.V.O., the King's factor at Balmoral. The casket was here removed from the hearse to a bier, and in a few minutes the wail of the bagpipes in the Mackintosh's Lament, which was the favourite pibroch of the late Duke, was the melancholy announcement to the hundreds of people who lined the southern bank of the Dee that the final portion of the sad journey had begun.

Marching at the head of the cortege was a detachment of the Duff Highlanders, next came the pipe band, led by Mr Colin Cameron, for many years piper to the late Duke, and the bier followed, pulled by Duff Highlanders, its Union Jack mantle of red, white, and blue imparting a distinctive touch of colour in the midst of the tartan. Following the bier were the remainder of the Duff Highlanders, while the Balmoral Highlanders brought up the rear, all in full Highland mourning. Very slowly the cortege moved along the avenue. It was only a glimpse that the stranger could get of the spectacle, but it was nevertheless picturesque. By this time the mist had lifted from distant Lochnagar, the sun was venturing to peep through the prevailing masses of dark watery clouds, there was not a breath of wind to move a leaf, and the gradually receding strains of the pibroch as the cortege disappeared among the trees punctuated a scene of stately solemnity. At the private chapel the cortege was joined by the Princess Royal, the Duchess of Fife, and the Princess Maud, who have been in residence at New Mar Lodge for some time; Lord Farquhar, and several others who had been specially invited to be present. A short service was conducted by Canon Denham of Rochester Cathedral and the Rev. Garden L. Duff, St Congan's, Turriff, private chaplains to the late Duke. The casket was afterwards deposited in the vault by the eight Duff Highlanders selected for this special duty. The service was of a strictly private nature, those present consisting only of members of the household and a very few people in the locality. The vault within the chapel, which was specially constructed for the interment, is built of polished red granite, and before it was sealed up yesterday afternoon the inhabitants of the district, including the estate servants and their families, were invited to view the casket, and a very large crowd availed themselves of the privilege.
— Glasgow Herald, 9 August 1912, p. 8 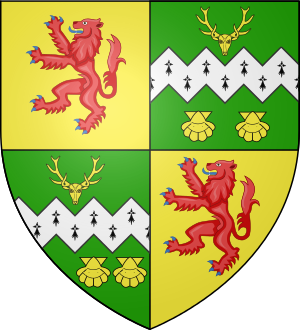 The Duke of Fife received a new patent as Duke of Fife and Earl of Macduff in the Peerage of the United Kingdom in April 1900, with special remainder to his daughters by Princess Louise and their heirs male.[6] The result was that he held two Dukedoms of Fife; the 1889 creation (with the subsidiary Marquessate of Macduff) would become extinct in the absence of a son and the 1900 creation (with the subsidiary Earldom of Macduff) would devolve upon his elder daughter in the absence of a son. In November 1905, his father-in-law, now King Edward VII, bestowed the title Princess Royal on the Duchess of Fife and declared that Lady Alexandra Duff and Lady Maud Duff should henceforth hold the title of Princess of Great Britain and Ireland with the style Highness.

Queen Victoria created the future Duke of Fife a Knight of the Thistle; George V created him an Extra Knight of the Garter. He was also sworn a Privy Counsellor in 1880.[7] At the coronation of his father-in-law, King Edward VII, in August 1902, and again at King George V's coronation in June 1911, the Duke of Fife acted as Lord High Constable. In addition to his London residence, 15 Portman Square, the Duke owned two estates in Scotland: Mar Lodge, Aberdeenshire, and Mountcoffer House, Banff.

Shorthand styles from birth to death