Princess Maud Alexandra Victoria Georgina Bertha (3 April 1893 – 14 December 1945), later Countess of Southesk, was a granddaughter of the British king Edward VII. Maud and her elder sister, Alexandra, had the distinction of being the only female-line descendants of a British sovereign officially granted both the title of Princess and the style of Highness.[1][2] Despite the fact that they were not daughters of a royal duke, they were sometimes unofficially referred to with the territorial designation of Fife but in official documents, until their marriages, they were always styled Her Highness Princess Maud or Alexandra, without the territorial designation "of Fife".[3]

Although Princess Maud did not otherwise carry out royal engagements, because of her position in the Commonwealth's order of succession she served as a Counsellor of State between 1942 and 1945.

Maud was born at East Sheen Lodge, Richmond-upon-Thames, Surrey on 3 April 1893. Her father was Alexander Duff, 1st Duke of Fife (1840–1912).[3] He was raised from Earl to Duke of Fife following marriage to Maud's mother, Princess Louise of Wales, the eldest daughter of the future King Edward VII.[3]

Maud and her sister were unique in sharing descent from both William IV (through his mistress, Dorothy Jordan), and William IV's niece, Queen Victoria, who succeeded him because he left no legitimate issue.[3] 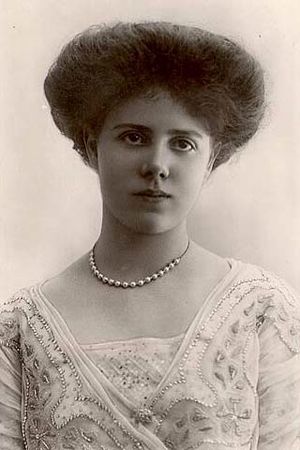 Princess Maud of Fife as a teenager.

In 1900, Queen Victoria granted Maud's father a second dukedom of Fife in the peerage of the United Kingdom with a special remainder providing for the succession of the duke's daughters and their male-line descendants to the title, in default of a male heir. Maud became second in line to the dukedom, after her elder sister Alexandra, and her descendants would eventually succeed to the peerage.

As a female line great-granddaughter of a British monarch (Queen Victoria), Maud was not entitled to the title of a Princess of the United Kingdom of Great Britain and Ireland nor to the attribute Royal Highness. Instead she was styled Lady Maud Duff, as the daughter of a duke.[3] She was sixth in the line of succession to the British throne at the time of her birth.

On 5 November 1905, King Edward VII gave Maud's mother the title of Princess Royal. He further ordered Garter King of Arms to gazette Maud and her sister with the style and attribute of Highness and the style of Princess prefixed to their respective Christian names, with precedence immediately after all members of the British Royal Family bearing the style of Royal Highness.[3]

Maud's uncle, King George V, in letters patent dated 20 November 1917, restructured the styles and titles of the royal family by restricting the titles of Prince or Princess and the style of Royal Highness to the children of the sovereign, the children of the sovereign's sons, and the eldest living son of the eldest son of the Prince of Wales. The Letters Patent also stated that "the titles of Royal Highness, Highness or Serene Highness, and the titular dignity of Prince and Princess shall cease except those titles already granted and remaining unrevoked". This had no direct effect on Maud and her sister, whose rank and style derived from the specific promotions granted to them by their grandfather, Edward VII. However, Maud complied with George V's wish that she stop using her title and style of Princess and Royal Highness. He did not, however, retract the royal warrant conferring the princely title and attribute of Highness upon her.

She rode in the carriage procession with members of the Royal Family at the funeral of George V in 1936; on this occasion she was styled in the London Gazette as "Lady Maud Carnegie".[6] She also attended the coronation of her first cousin, King George VI in May 1937, taking part in the procession of Members of the Royal Family, but not in the procession for Princes and Princesses of the Blood Royal (unlike her sister Princess Arthur of Connaught, who was married to a Prince of the Blood Royal), and was officially styled as Lady Maud Carnegie.[7]

On marriage, she became known as Lady Maud Carnegie (in accordance with the custom that peers' daughters who marry non-peers of lower rank - as was the case of a duke's daughter married to the eldest son of an earl - retain their own precedence and style), and later, on the succession of her husband to the peerage, as Countess of Southesk. 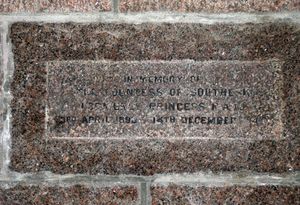 Princess Maud consistently appeared at the Court of St. James's among the Royal Family, although she did not undertake official or public duties. During George VI's absence in Africa in 1943, Maud served as a Counsellor of State. At the time of her death in 1945, she was thirteenth in line to the British throne and heiress presumptive to the dukedom of Fife, since her sister's only son Alastair Windsor, 2nd Duke of Connaught and Strathearn, had died in 1943. Maud's only son James, Lord Carnegie, succeeded his aunt as 3rd Duke of Fife in 1959.[3] He succeeded to his father's titles in 1992.

Maud died in a London nursing home in December 1945 after a bout of acute bronchitis.

Legally Princess Maud retained the style of Princess and Highness until her death.