From Infogalactic: the planetary knowledge core
Jump to: navigation, search
For other uses, see Aten (disambiguation).

Aten (also Aton, Egyptian jtn) is the disk of the sun in ancient Egyptian mythology, and originally an aspect of the god Ra. The deified Aten is the focus of the monolatristic, henotheistic, monistic or monotheistic religion of Atenism established by Amenhotep IV, who later took the name Akhenaten in worship and recognition of Aten. In his poem "Great Hymn to the Aten", Akhenaten praises Aten as the creator, giver of life, and nurturing spirit of the world. Aten does not have a Creation Myth or family, but is mentioned in the Book of the Dead. The worship of Aten was eradicated by Horemheb.

The Aten, the sun-disk, is first referred to as a deity in The Story of Sinuhe from the 12th dynasty,[1] in which the deceased king is described as rising as god to the heavens and uniting with the sun-disk, the divine body merging with its maker.[2] By analogy, the term "silver aten" was sometimes used to refer to the moon.[3] The solar Aten was extensively worshipped as a god in the reign of Amenhotep III, when it was depicted as a falcon-headed man much like Ra. In the reign of Amenhotep III's successor, Amenhotep IV, the Aten became the central god of Egyptian state religion, and Amenhotep IV changed his name to Akhenaten to reflect his close link with the new supreme deity.[1]

The full title of Akhenaten's god was "Ra-Horakhty who rejoices in the horizon, in his Name as the Light which is in the sun disc." (This is the title of the god as it appears on the numerous stelae which were placed to mark the boundaries of Akhenaten's new capital at Akhetaten, modern Amarna.) This lengthy name was often shortened to Ra-Horus-Aten or just Aten in many texts, but the god of Akhenaten raised to supremacy is considered a synthesis of very ancient gods viewed in a new and different way. The god is also considered to be both masculine and feminine simultaneously. All creation was thought to emanate from the god and to exist within the god. In particular, the god was not depicted in anthropomorphic (human) form, but as rays of light extending from the sun's disk.

Furthermore, the god's name came to be written within a cartouche, along with the titles normally given to a Pharaoh, another break with ancient tradition. Ra-Horus, more usually referred to as Ra-Horakhty (Ra, who is Horus of the two horizons), is a synthesis of two other gods, both of which are attested from very early on. During the Amarna period, this synthesis was seen as the invisible source of energy of the sun god, of which the visible manifestation was the Aten, the solar disk. Thus Ra-Horus-Aten was a development of old ideas which came gradually. The real change, as some see it, was the apparent abandonment of all other gods, especially Amun, and the debatable introduction of monotheism by Akhenaten.[4] The syncretism is readily apparent in the Great Hymn to the Aten in which Re-Herakhty, Shu and Aten are merged into the creator god.[5] Others see Akhenaten as a practitioner of an Aten monolatry,[6] as he did not actively deny the existence of other gods; he simply refrained from worshipping any but the Aten.

Principles of Aten's religion were recorded on the rock tomb walls of Akhetaten. In the religion of Aten (Atenism), night is a time to fear.[7] Work is done best when the sun, Aten, is present. Aten cares for every creature, and created a Nile river in the sky (rain) for the Syrians.[8] Aten created all countries and people. The rays of the sun disk only holds out life to the royal family; everyone else receives life from Akhenaten and Nefertiti in exchange of loyalty for Aten.[9]

When a good person dies, he/she continues to live in the City of Light for the dead in Akhetaten. The conditions are the same after death. Akhenaten judged whether someone should be granted an afterlife, and operated the scale of justice.

The explanation as to why Aten could not be fully represented was that the god has gone beyond creation.

The cult centre of Aten was at the new city Akhetaten; some other cult cities include Thebes and Heliopolis. The principles of Aten's cult were recorded on the rock walls of tombs of Tall al-Amarnah. Significantly different from other ancient Egyptian temples, temples of Aten were colorful and open-roofed to allow the rays of the sun. Doorways had broken lintels and raised thresholds. No statues of Aten were allowed; those were seen as idolatry.[10] Priests had less to do, since offerings (fruits, flowers, cakes) were limited, and oracles were not needed.[11] Temples of Aten did not collect tax.

In the worship of Aten, the daily service of purification, anointment and clothing of the divine image was not performed. Incense was burnt several times a day. Hymns sung to Aten were accompanied by harp music. Aten's ceremonies in Akhetaten involved giving offerings to Aten with a swipe of the royal scepter.

Instead of barque processions, the royal family rode on a chariot on festival days. 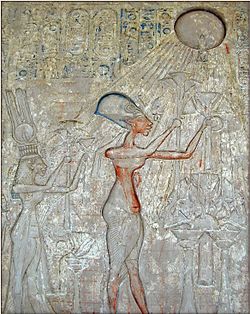 Pharaoh Akhenaten and his family adoring the Aten, second from the left is Meritaten who was the daughter of Akhenaten.

Small Temple of the Aten at Akhetaten

During the Amarna Period, the Aten was given a Royal Titulary (as he was considered to be king of all), with his names drawn in a cartouche. There were two forms of this title, the first had the names of other gods, and the second later one which was more 'singular' and referred only to the Aten himself. The early form has Re-Horakhti who rejoices in the Horizon, in his name Shu which is the Aten. The later form has Re, ruler of the two horizons who rejoices in the Horizon, in his name of light which is the Aten.

Egyptologists have vocalized the word variously as Aten, Aton, Atonu, and Itn.