The Battle of Ludford Bridge was a largely bloodless battle fought in the early years of the Wars of the Roses. It took place on 12 October 1459, and resulted in a setback for the Yorkists. Although this seemed to be a triumph for the rival Lancastrians at the time, they had thrown away their advantage within six months.

In the first pitched battle of the wars, the First Battle of St Albans in 1455, Richard of York had eliminated most of his rivals at court. He reaffirmed his allegiance to the King, Henry of Lancaster and was reappointed Lord Protector, until February 1456. However, Henry's Queen, Margaret of Anjou, suspected that Richard ultimately intended to supplant her infant son Edward of Westminster, Prince of Wales and become King himself. She continually plotted and agitated against Richard and the Nevilles, his chief supporters amongst the nobles.[1] She was supported by several nobles, many of them the sons of York's opponents who had died at St. Albans.

The renewed outbreak of open warfare was precipitated by some high-handed actions by York's nephew Richard Neville, 16th Earl of Warwick. Warwick held the post of Captain of Calais, and late in 1458, he had led ships from Calais in attacks on merchant ships from Lübeck and Spain, on obscure grounds of acknowledgement of English sovereignty in the Channel. Though these actions infuriated the royal court, they were popular among the merchants, particularly in London and Kent, as they removed competitors for English trade with Flanders. When Warwick was summoned to London to explain his actions before the King's council, there was violence between Warwick's retinue and the royal household. Warwick claimed that his life had been threatened, and he returned to Calais with any charges unanswered.[2][3]

Margaret took this to be open defiance of Henry's authority. She had long before persuaded Henry to move the court from London to the Midlands, where her supporters had the most influence. They began mustering their forces, and summoned a council to be held in Coventry on 24 June. Richard of York, his brother in law Richard Neville, 5th Earl of Salisbury (Warwick's father) and Warwick himself feared that they would be arrested for treason if they went to their opponents' heartland, and refused to attend. They were quickly indicted for rebellion.[4]

Richard's forces began the campaign dispersed over the country. Richard himself was at Ludlow in the Welsh Marches, Salisbury was at Middleham Castle in North Yorkshire and Warwick was at Calais. As Salisbury and Warwick marched to join Richard, Margaret ordered a force under James Tuchet, 5th Baron Audley to intercept Salisbury. At the bloody Battle of Blore Heath, Audley's forces were routed.

Even after this defeat, the forces available to Henry and Margaret outnumbered York's, Salisbury's and Warwick's combined armies by two to one. The Yorkist army tried to move towards London, but found their path blocked by the Lancastrian army with King Henry himself nominally at its head, and fell back to Worcester. Here, Richard attended mass in the cathedral before sending written protestations of his loyalty to Henry. These were ignored.[5]

Richard retreated towards Ludlow, before making a stand at a fortified position near Ludford, Shropshire on 12 October. His troops excavated a defensive ditch in a field on the opposite side of the River Teme from Ludlow, near the bridge which gave the battle its name. They also constructed barricades of carts in which cannon were emplaced. However, morale was low, not least because the royal standard could be seen flying in the Lancastrian army, and it was known that King Henry himself was present, in full armour. For much of his reign, Henry had been regarded as an ineffectual ruler, and he had even lapsed into madness for periods of several months at a time. Richard of York and his supporters had maintained that they were opposed only to Henry's "evil counsellors". Now they realised that their army would probably refuse to fight against Henry himself.[6]

Among the troops brought by Warwick from Calais were 600 men led by Andrew Trollope, an experienced soldier. During the night, Trollope and his men and others from the Yorkist forces defected to the Lancastrians.[7] Giving the impression of returning to Ludlow for the night, York, Salisbury and Warwick abandoned their armies and fled.[8] York, with his second son Edmund, Earl of Rutland, fled into Wales, and from there to Ireland. Salisbury, Warwick and York's eldest son Edward, Earl of March went to the West Country where a supporter, Sir John Dynham, loaned them a boat which took them to Calais, where the garrison still supported Warwick.[9]

At dawn on 13 October, the leaderless Yorkist troops knelt in submission before Henry, and were pardoned. York had abandoned not only his troops but also his wife Cecily Neville, Duchess of York, his two younger sons George and Richard and his youngest daughter Margaret, who were found standing at the Ludlow Market Cross when the Lancastrians arrived. They were placed in the care of the Duchess's sister Anne, wife of Humphrey Stafford, 1st Duke of Buckingham, one of Margaret's supporters. The Lancastrian troops proceeded to plunder Ludlow, becoming drunk on looted wine and committing many outrages.[6] 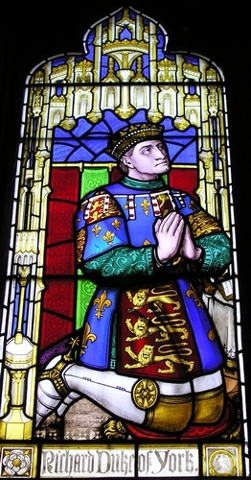 Richard, Duke of York, portrayed in a stained glass window at St Laurence's Church, Ludlow. The town still bears the House of York's roses in its crest.

Henry and his army then returned to Coventry, where a Parliament packed with Queen Margaret's supporters attainted York, Salisbury and Warwick and their remaining supporters. However, it proved impossible for the Earl of Wiltshire, who was appointed Lieutenant of Ireland in Richard of York's place, to raise troops to oust York from Ireland, while the Duke of Somerset was twice repulsed by the garrison of Calais when he tried to reclaim it from Warwick.[10]

Although it had appeared that the country had been united behind King Henry at the time of the Battle of Ludford Bridge, within a short time the behaviour of Henry's court had prompted many complaints that Lancastrian favourites were enriching themselves at the expense of the King and populace. It was these grievances which Richard of York had first used as pretext to take arms against Henry's court in the early 1450s. Within six months of the battle, Warwick was able to land at Sandwich in Kent, with popular support from London and the south east of England. He then marched into the Midlands and, aided by treachery in the Lancastrian army, he captured King Henry at the Battle of Northampton.