The Capture of Enschede took place during the Eighty Years' War and the Anglo–Spanish War on the 18 and 19 October 1597. A Dutch and English army led by Maurice of Orange took the city after a very short siege during which they threatened to the Governor that they would destroy the city. The siege was part of Maurice's campaign of 1597, a successful offensive against the Spaniards during what the Dutch call the Ten Glory Years.[4]

After the siege and capture of Bredevoort a part of Maurice's army which included Scots and Frisians under Count Solms and Van Duivenvoorde went from Winterswijk to Gronau. On 18 October Prince Maurice along with his cousin (and brother-in-law) William Louis went with the cavalry and the day before, the artillery that had been in service at Bredevoort was on the move. They were followed by the main body consisting of English troops under Colonel Horace Vere and the Frisians, while the companies of Duivenvoorde, Brederode and the English cavalry formed the rearguard.[5] 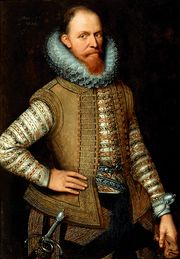 Halfway to Enschede at Glanerbrug Maurice's army formed up in battle formation and headed towards the city. By this time the artillery had arrived and a formal siege could commence.[3] Shots were fired at the city walls for a day, after which Maurice sent a trumpeter to the gate, demanding the surrender. Maurice threatened that his army would give Enschede the same fate that happened at Bredevoort and Groenlo which were burnt and ravaged in the ensuing chaos of the assault. Maurice threatened that he would 'break the heads of them all if he fired a single shot with the artillery.'[2]

The governor lieutenant Grootveld and the garrison commander Captain Vasques, requested permission to examine the artillery by which it was proposed to reduce the city.[3]:394 This was agreed, the inspection was made and after some discussion in the city with the clergy they accepted Maurice's terms as an "absolutely fair condition".[1] The Spanish garrison led by two companies totaling 108 men then marched out of the city.[2] A company of Dutch then garrisoned the place upon which the company commander Jaques Meurs was then made governor.[3]:394 Maurice ordered the fortifications largely dismantled so that the city would be no longer suitable as a military place for future occupants and then marched to the city of Oldenzaal and took the place after a short siege.[6] A contingent of Dutch and English soldiers split from the main army led by Captain Van Duivenvoorde who headed Northeast and then took Ootmarsum.[5]