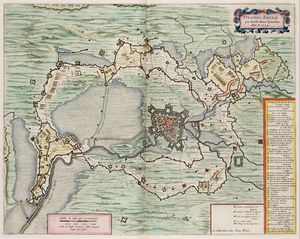 Map of the siege of Breda by Spinola. J.Blaeu.

The Siege of Breda of 1624–25 occurred during the Eighty Years' War. The siege resulted in Breda, a Dutch fortified city, falling into the control of the Army of Flanders.

Following the orders of Ambrogio Spinola, Philip IV's army laid siege to Breda in August 1624. The siege was contrary to the wishes of Philip IV. The city was heavily fortified and defended by a garrison of 7,000 men. Spinola rapidly blocked its defences and prevented a Dutch relief army under the leadership of Maurice of Nassau from blocking access to his supplies. In February 1625, a second relief force, consisting of 7,000 English troops under the leadership of Horace Vere and Ernst von Mansfeld, was also driven off by Spinola. After a costly eleven-month siege, Justin of Nassau surrendered Breda in June 1625. Only 3,500 Dutchmen[1] and fewer than 600 Englishmen had survived the siege.[2]

The Siege of Breda is considered Spinola's greatest success and one of Spain's last major victories in the Eighty Years' War. The siege part of a plan to isolate the Republic from its hinterland. Although political infighting hindered Spinola's freedom of movement, Spain's efforts in the Netherlands continued thereafter. The siege of 1624 captured the attention of European princes and, for an interval, Spanish armies regained the formidable reputation they had held in the past centuries.

The capture in 1629 of a Spanish treasure fleet by Piet Heyn led to the capture of the fortress city of 's-Hertogenbosch, with the Stadtholder, Frederick Henry, Prince of Orange, breaking the land blockade. In 1637, after a four-month siege, Breda was recaptured by Frederick Henry. In 1648 the Treaty of Westphalia ceded it to the Dutch Republic.

There were several motives for the siege of Breda. Because the Dutch regularly used the town as a base for raiding Spanish Brabant, the parts of Brabant under royal rule would be better protected if the city were conquered. In addition, neighbouring towns occupied by the States, such as Bergen op Zoom, would be easier to conquer with a foothold in Breda.[5]

The reduced prestige of the Spanish army was an important reason. In 1590, Breda was captured from the Spanish using the stratagem with the peat boat. The conquest of a well-defended city like Breda could erase this disgrace. In addition, Spinola personally felt that the failure of the Siege of Bergen-op-Zoom (1622) was a blot on his reputation.

Furthermore, Spain wanted to have a strong position in potential peace negotiations. The conquest of Breda would enable Spain to put forward stronger demands concerning religious freedom for Catholics in the Republic and lifting the blockade of the Scheldt.

Breda was one of the strongest cities in the defence of the Republic between the States of Holland and royal Brabant. The city was strategically located on a navigable river, Mark, and near several roads.[6][7]

Henry III of Nassau, Lord of Breda from 1509 to 1538, had been commissioned by Charles V to travel through Europe. In Italy, he came into contact with modern defences. Thus, in 1531 he inspired the construction of the medieval walls of Breda. They were later replaced by a fortification.[8] In 1587 and 1622, the defences were further expanded.

The Breda fortress consisted of a very high earthen thoroughfare with 15 bastions and a moat. The 55 to 117 meter wide canal[9] was five feet deep and was provided with water from Mark.[10] Access to the city was made possible by four brick gates. Crescent ravelins were applied in the ditches. Hornwork was placed on the gates and at the monastery. Stakewall were built to complicate assault by horsemen and foot soldiers and simultaneously prevent desertion.[11] The fortifications were in excellent condition and served as a prime example of fortifications.[9]

Around Breda, forests formed an obstacle for riders and artillery and the high water level of the Mark posed challenges to the infantry. The rivers Mark and Aa and other streams also hampered besiegers. By using an inundation sluice near the Ginnekense gate, the area south of Breda could be put underwater if opened. The north side had a lock near Terheijden that functioned.[12]

Because the States of Holland and West Friesland knew that Spain might attempt to conquer Breda, they left the city with enough food, supplies, and weapons for an eight month siege. The city council refused to store more food than was necessary for a nine month siege. Nobody knew what tactics Spain would apply. Therefore, the possibility of a direct assault was also considered. To prevent this, a State army was stationed near Breda.[13]

The garrison in Breda consisted of 17 companies in peacetime, each of which consisted of 65 men and 5 infantry squadrons of 70 riders each. When it was probable that the city would become besieged, the squadrons were supplemented by another 30 riders each; the infantry was supplemented with 28 companies of 135 men. To save food, three squadrons sent to Geertruidenberg shortly before a siege. The castle held approximately around 100 people of the 5,200 soldiers. The male inhabitants of Breda between 20 and 70 years, about 1,800 men, were armed to support the soldiers.[14]

The governor of the city was Justin of Nassau, an illegitimate son of William I, Prince of Orange. His deputy was Dyrcx Cornelis van Oosterhout, but his role was insignificant during the siege.[15]

In addition to the soldiers, others stayed in the city. Ordinary citizens, farmers, spouses and children of soldiers, came to the town to seek protection against the Spanish army. The soldiers' wives were responsible for cooking and washing for the soldiers and caring for the sick and wounded. The total number of inhabitants in the city is estimated at 13,111. They are believed to have been housed in about 1,200 homes.[16]

Conflicting and incomplete data does not allow for an accurate calculation of the size of the Spanish army. On 30 September the number was probably around 40,000 soldiers and on about 2 May 1625, approximately 80,000 soldiers. 25,000 were encamped along the supply corridor, another 25,000 men were used for the containment of the city, and 30,000 served as general reserves.[17]

According to the text on the map by Blaeu, “[This was] so large an army, as had not been seen in the Netherlands in living memory.”

The composition of the Spanish army was diverse, as shown in the table above. The army consisted primarily of infantry, with a small number of riders. Members of the infantry were equipped with either a rapier and a five metre long pike, or a rapier with a musket; members of the cavalry was equipped with either a lances and two pistols, or a musket and two pistols.[18][19]

The infantry was mainly used for the lines to raise and to guard and defend against an army and State terror against sorties from the city. In the supply corridor, the foot soldiers deployed to protect the convoys. The cavalry was more mobile than the infantry and was therefore mainly used to inspect the area and to protect convoys.[19]

The cannons could fire 10 shots per hour and were operated by gunners. The exact number of the Spanish guns is not precisely known, but there were certainly more than 30.[20] Sappers engaged in building bridges, maintaining roads, and other activities.

The commander of the Spanish army was Ambrogio Spinola, 1st Marquis of the Balbases, a known military strategist from Italy. His deputies were the regimental commanders Hendrik, count van den Bergh, who was also commander of the supply corridor, and John VIII, Count of Nassau-Siegen. Spinola was the commander of the reserve forces until 31 October when he was succeed by Carlos Coloma.

Because of the vastness of Breda, Spinola had his troops divided into four compartments. The four subjects with commanders were:

The siege of 1624–1625 is the subject of the 1998 novel El sol de Breda (The Sun Over Breda) by the Spanish author Arturo Pérez-Reverte, as part of the Captain Alatriste series. The events of the siege – including both the gruelling fighting with the Dutch and the infighting among the Spanish, including a major mutiny by unpaid Spanish troops – are depicted from the point of view of a boy serving with the Spanish forces. The realistic depiction of war and soldiers' daily life seems influenced by the writer's own long experience as a war correspondent.

The siege appears in the film Alatriste adapted from the novel series.