The Siege of Leiden occurred during the Eighty Years War and the Anglo–Spanish War in 1573 and 1574, when the Spanish under nl (Francisco de Valdez) attempted to capture the rebellious city of Leiden, South Holland, the Netherlands. In the end the siege failed when the city was successfully relieved in October 1574.[1]

In the war (eventually called the Eighty Years' War) that had broken out, Dutch rebels took up arms against the king of Spain, whose family had inherited the Seventeen Provinces of the Netherlands. Most of the counties of Holland and Zeeland were occupied by rebels in 1572, who sought to end the harsh rule of the Spanish Duke of Alba, governor-general of the Netherlands. This territory had a very high density of cities, which were protected by huge defense works and by the low-lying boglands, which could easily be flooded by opening the dykes and letting in the sea.

The Duke of Alba tried to break resistance using brute force. He used Amsterdam as a base, as this was the only city in the country of Holland that had remained loyal to the Spanish government. Alba's cruel treatment of the populations of Naarden and Haarlem was notorious. The rebels learned that no mercy was shown there and were determined to hold out as long as possible. The county of Holland was split in two when Haarlem was conquered by the Spanish after a costly seven-month siege. Thereafter, Alba attempted to conquer Alkmaar in the north, but the city withstood the Spanish attack. Alba then sent his officer Francisco de Valdez to attack the southern rebel territory, starting with Leiden. In the meantime, due to his failure to quell the rebellion as quickly as he had intended, Alba submitted his resignation, which king Philip accepted in December. The less harsh and more politic Luis de Zúñiga y Requesens replaced him as governor-general.

The city of Leiden had plenty of food stored for the siege when it started in October 1573. The siege was very difficult for the Spanish, because the soil was too loose to dig holes, and the city defense works were hard to break. Defending Leiden was a Dutch States rebel army which consisted of English, Scottish and Huguenot French troops.[2][3] The leader of the Dutch rebels, William the Silent, Prince of Orange, tried to relieve Leiden by sending an army into the Netherlands under the command of his brother, Louis of Nassau. Valdez halted the siege in April 1574 to face the invading rebel troops, but Sancho d'Avila reached them first and defeated the army of Orange in the Battle of Mookerheyde, where Louis fell.

Second siege, and relief, of Leiden 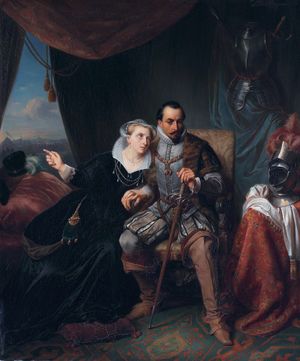 The legend of Magdalena Moons and Francisco de Valdez grew out of the siege of 1574: painting by Simon Opzoomer, ca 1845.

During the brief respite from the siege, Orange had counselled the citizens of Leiden to restock their city with supplies, and take in a larger rebel garrison to help defend the town. They disregarded his advice however, with the result that when Valdez' army returned to continue the siege on May 26, 1574, they were in as poor a condition as they had been previously. The city considered surrendering, because there was almost no chance of relief and supplies were dwindling. The rebel army was defeated and the rebel territory was very small compared to the huge Spanish empire.

The Prince of Orange, however, was determined to relieve the city. Therefore, he sent a carrier pigeon into the city pleading for it to hold out for three months. To fulfil this promise, he wished to break the dikes, allow the sea to flood the low-lying land (in the same fashion that Alkmaar was saved), so that the siege could be lifted using the rebel fleet, and the Spaniards forced to retire before the incoming sea. But the damage to the surrounding countryside would be enormous, and therefore the population of the area resisted the cutting of the dikes. However, in the end, the Prince prevailed and the outer dikes were broken on August 3. Previously, the Prince's Admiral Louis Boisot had assembled a fleet of more than two hundred small vessels, manned by 2,500 veteran Dutch seamen, and carrying a large store of provisions had been collected in preparation to lift the siege. Unfortunately, soon after the first dikes were broken, the Prince of Orange came down with a violent fever and as he was the moving force in all these machinations, the planned relief of the besieged city came to a grinding halt. More importantly, the flooding of the outskirts took longer than expected because the wind was not favourable. During this time, on August 21, the inhabitants of Leiden sent a message to the Prince saying that they had held out for three months, two with food and one without food. The Prince answered them, again by carrier pigeon that the dikes were all pierced and relief would come soon.[4]

However, only by the first day of September, when the Prince had recovered from his ailment, did the expedition continue in earnest. More than 15 miles lay between the relieving rebel fleet and Leiden, but ten miles were covered without difficulty. On the night of September 10, the fleet came upon the Land-scheiding, which blocked their path to Leiden and captured it in a night surprise attack which was successful. The Spaniards had neglected to strongly fortify this important post. The next morning, the Spaniards countered to try to regain the position but were repulsed with the loss of several hundred men. The dike was cut through, and the fleet proceeded through the breach towards Leiden.

Admiral Boisot and the Prince of Orange had been misinformed as to the lie of the lands, and had assumed that the rupture of the Land-scheiding would flood the country inland all the way to Leiden. Instead, the rebel flotilla once again found their path blocked, this time by the Greenway dike, less than a mile inland of the Land-scheiding, which was still a foot above the water level. Again however the Spaniards had left the dike largely undefended, and the Dutch broke though it without much difficulty. Unfortunately, due to easterly winds driving the water back seawards, and the ever growing surface area of the land that the water covered, the flooding was by this time so shallow that the fleet was all but stranded. The only way that was deep enough for them to proceed was by a canal, leading to a large inland lake called the Zoetermeer (southern lake). This canal, and the bridge over it, were strongly defended by the Spaniards, and after a brief amphibious struggle, the Admiral gave up the venture. He dispatched a despondent message to the Prince, saying that unless the wind turned, and they could sail around the canal, they were lost.

Meanwhile, in the city, the inhabitants clamoured for surrender when they saw that their countrymen had run aground. But Mayor van der Werff inspired his citizens to hold on, telling them they would have to kill him before the city could surrender, and telling him they could eat his arm if they were really that desperate. In fact thousands of inhabitants died of starvation. To add to their troubles, as so often happened in that age, the plague appeared in the city streets and near eight thousand died from that cause alone. The city only held out because they knew that the Spanish soldiers would massacre the whole population in any case, to set an example to the rest of the country, as had happened in Naarden and the other cities that had been sacked. Admiral Boisot sent a dove into the town, assuring them of speedy succour.

On the 18th the wind shifted again, and blowing strongly from the west, piled the sea against the dams. With the rising water level, the flotilla was soon able to make a circuit around the bridge and canal, and successfully enter the Zoetermeer. A succession of fortified villages now stood in the way of the patriot fleet, and the Dutch Admiral was afraid even now of losing his prize, but the Spaniards, panicked by the rising waters, barely offered any resistance. Every one of their strongholds, now become islands, were deserted by the Royalist troops in their flight, except for the village of Lammen. This was a small fort under the command of Colonel Borgia, and situated about three-quarters of a mile from the walls of Leiden.

This was a formidable obstacle, but fortunately for the Dutch rebels, the Spaniards, adept at land fighting and not amphibious warfare, had despaired of maintaining so unequal a contest against the combined forces of the sea and the veteran Dutch seamen. Accordingly, the Spanish commander Valdez ordered a retreat in the night of October 2, and the army fled, rendered more fearful by a terrible crash they heard from the city, and assumed to be the men of Leiden breaking still another dam upon them. In fact, part of the wall of Leiden, eroded by the sea water, had fallen, leaving the city completely vulnerable to attack, had any chosen to remain.

The next day, the relieving rebels arrived at the city, feeding the citizens with herring and white bread. The people also feasted on hutspot (carrot and onion stew) in the evening. According to legend, a little orphan boy named Cornelis Joppenszoon found a cooking pot full with hutspot that the Spaniards had had to leave behind when they left their camp, the Lammenschans, in a hurry to escape from the rising waters.[5]

In 1575, the Spanish treasury ran dry, so that the Spanish army could not be paid anymore and it mutinied. After the pillaging of Antwerp, the whole of the Netherlands rebelled against Spain. Leiden was once again safe.

The Leiden University was founded by William of Orange in recognition of the city's sacrifice in the siege. According to the ironical fiction still maintained by the Prince, that he was acting in behalf of his master Philip of Spain, against whom he was in fact in open rebellion, the university was endowed in the King's name.

The 3 October Festival is celebrated every year in Leiden. It is a festival, with a funfair and a dozen open air discos in the night.[6] The municipality gives free herring and white bread to the citizens of Leiden.