Carrickfergus (from Irish: Carraig Fhearghais, meaning "rock of Fergus"),[3] known locally and colloquially as "Carrick", is a large town in County Antrim, Northern Ireland. It is located on the north shore of Belfast Lough, 11 miles (18 km) from Belfast. The town had a population of 27,903 at the 2011 Census and takes its name from Fergus Mór mac Eirc, the 6th-century king of Dál Riata. It is County Antrim's oldest town and one of the oldest settlements in Ireland as a whole.[4] Carrickfergus was the administrative centre for Carrickfergus Borough Council, before this was amalgamated into the Mid and East Antrim District Council in 2015, and forms part of the Belfast Metropolitan Area. It is also a townland of 65 acres, a civil parish and a barony.[5]

The town is the subject of the classic Irish folk song "Carrickfergus", a 19th-century translation of an Irish-language song (Do Bhí Bean Uasal)[6] from Munster, which begins with the words, "I wish I was in Carrickfergus."[7]

The British peerage title of Baron Carrickfergus, which had become extinct in 1883, was bestowed upon Prince William on his wedding day on 29 April 2011.

As an urban settlement, Carrickfergus far pre-dates the capital city Belfast and was for a lengthy period both larger and more prominent than the nearby city. Belfast Lough itself was known as 'Carrickfergus Bay' well into the 17th century. Carrickfergus and the surrounding area was, for a time, treated as a separate county, although it is today part of County Antrim.

The historical walled town originally occupied an area of around 97,000 square metres, which now comprises the town centre, bordered by Albert Road to the west, the Marine Highway to the south, Shaftesbury Park to the north and Joymount Presbyterian Church grounds to the east. Segments of the town wall are still visible in various parts of the town and in various states of preservation. Archaeological excavations close to the walls' foundations have yielded many artefacts that have helped historians piece together a picture of the lives of the 12th and 13th century inhabitants.[4][8]

In the 5/6th century, Fergus, the son of Erc of Armoy, left the province of Ulster to form a kingdom in Scotland. Upon returning to Ulster some time afterwards, his ship ran aground on a volcanic dyke by the shore, which became loosely known as "Carraig Fhearghais" – the rock of Fergus.[8]

Carrickfergus became an inhabited town shortly after 1170, when Anglo-Norman knight John de Courcy invaded Ulster, established his headquarters in the area and built Carrickfergus Castle on the "rock of Fergus" in 1177.[9] The castle, which is the most prominent landmark of Carrickfergus, is widely known as one of the best-preserved Norman castles in Ireland.

Sometime between 1203 and 1205, De Courcy was expelled from Ulster by Hugh de Lacy, as authorised by King John. de Lacy oversaw the final construction of the castle, which included the gatehouse, drum towers and outer ward. It was at this time that he established the nearby St Nicholas' Church. de Lacy was relieved of his command of the town in 1210, when King John himself arrived and placed the castle under royal authority. de Lacy eventually regained his title of Earl of Ulster in 1227, however the castle and its walled town were captured several more times following his death (in 1242) and the town largely destroyed by the Scots in 1402.[8][9]

The Battle of Carrickfergus, part of the Nine Years War, took place in and around the town in November 1597. It was fought between the crown forces of Queen Elizabeth I and the Scots clan of MacDonnell, and resulted in a defeat for the English. A contemporary Elizabethan illustration of Carrickfergus shows ten tower-houses, as well as terraces of single-storey houses, some detached cottages and 70 or more Irish beehive-type huts in the town.[10] 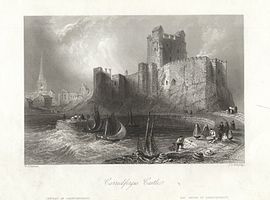 A drawing of Carrickfergus Castle circa 1840.

Sir Arthur Chichester was appointed by the Earl of Essex to govern the castle and town in 1599 and was responsible for the plantation of English and Scottish peoples in the town, as well as the building of the town wall.[11]

In 1637 the Surveyor General of Customs issued a report compiled from accounts of customs due from each port and their "subsidiary creeks". Of the Ulster ports on the list, Carrickfergus was first, followed by Bangor, Donaghadee, and Strangford.[12] In the same year the town sold its customs rights - which ran from Groomsport in County Down up to Larne in County Antrim - to Belfast and this in part led to its decline in importance as the province of Ulster grew. 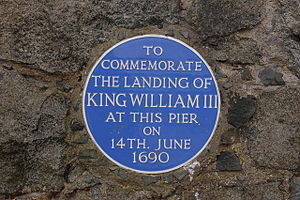 A plaque at the harbour commemorates the landing of William of Orange in the town in 1690.

Nevertheless, the decaying castle withstood several days of siege by the forces of William of Orange in 1689, before surrendering on 28 August. William himself subsequently landed at Carrickfergus on 14 June 1690. During the Seven Years' War, in February 1760, the whole town was briefly captured and held to ransom by French troops landed from Francois Thurot's naval squadron, after the defenders ran out of ammunition.

In 1711 Carrickfergus was the scene of the last witchcraft trial in Ireland. Eight women were charged with bewitching a young girl, and were convicted, despite a strong indication from one of the judges that the jury should acquit. They were sentenced to a year in prison and four sessions in the pillory.

In April 1778, during the American Revolutionary War, John Paul Jones, in command of the American ship Ranger, attempted to capture a British Royal Navy sloop of war, HMS Drake, moored at Carrickfergus. Having failed, he returned a few days later and challenged Drake to a fight out in the North Channel which the Americans won decisively.

During the 1790s there was considerable support in the Carrickfergus area for the United Irishmen.[13] On 14 October 1797 William Orr was hanged in the town following what was widely regarded as a show trial held in Carrickfergus Courthouse[14] (now the Town Hall[15]) and in 1798 United Irish founder Henry Joy McCracken was captured on the outskirts of the town while trying to escape to America.[16]

In 1912 the people of Carrickfergus turned out in their thousands to watch as the RMS Titanic made its first ever journey up the lough from its construction dock in Belfast. The famous passenger liner was anchored overnight just off the coast of Carrickfergus, before continuing on its journey.[17]

During World War II, Northern Ireland was an important military base for United States Naval and Air Operations and a training ground for American G.I.s. The First Battalions of the elite US Rangers were activated and based in Sunnylands Camp for their initial training. The US Rangers Centre in nearby Boneybefore pays homage to this period in history.[17] Italian and German Prisoners of War were also held in the town, the Italians in a camp at Sullatober mill, and Germans at Sunnylands.

In the 1970s, the town became an important centre for the textile industry. An ICI man-made fibres factory was opened at Kilroot and was followed by the Rothman's cigarette factory. Courtaulds operated a large rayon works there until the 1980s. In 1981 Kilroot power station opened and is the largest power station in Northern Ireland. Carrickfergus now is a centre for leisure sailing, and is home to Carrickfergus Marina and Carrickfergus Sailing Club. The town is part of the Greater Belfast conurbation, being 11 miles (18 km) from Belfast city centre.

On 8 September 2007, Carrickfergus was the Northern Irish host for the Last Night at the Proms, featuring Alison Balsom, Alfie Boe, and Ulster conductor Kenneth Montgomery.

For more details on this topic, see The Troubles.

Throughout the course of The Troubles, there was a reasonably large paramilitary presence in the town, namely the Ulster Volunteer Force and Ulster Defence Association.[18] Census figures show that the Catholic population of Carrickfergus declined from 16.2% in 1971 to 7.5% in 1991.[19] 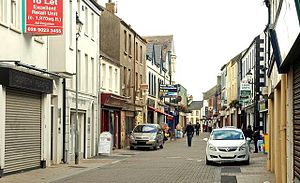 West Street on a quiet day. 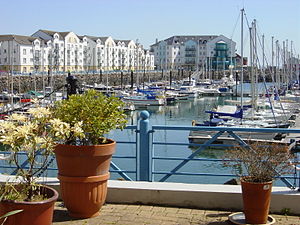 The marina complex in Carrickfergus. 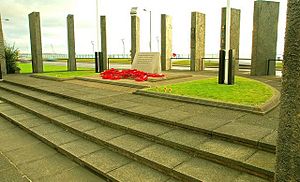 The war memorial at Joymount, in Carrick's town centre. 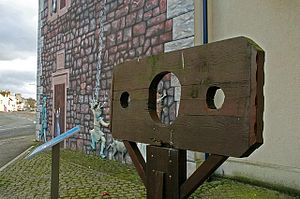 The wall mural and replica pillory in the town centre are popular attractions for visiting tourists.

Carrickfergus is classified by the Northern Ireland Statistics and Research Agency (NISRA)[20] as a large town (i.e. population between 18,000 and 75,000 people) and within the Belfast Metropolitan Urban Area (BMUA). On Census day (27 March 2011) there were 37,659 people living in Carrickfergus. Of these:

Carrickfergus railway station opened on 1 October 1862.[23] In addition, the northwest of the town is served by Clipperstown railway station, and the east by Downshire railway station. All three stations have regular commuter services to Belfast and Larne. Three historic stations in Carrickfergus, Barn, Eden and Mount, closed in the 1970s.

Translink also operates a local 'town-service' bus route and regular services to both Whitehead and Belfast.

Carrickfergus is covered by the East Antrim constituency.

Local Councillors for the area are:

There are many primary and secondary schools in Carrickfergus, including:

Sporting establishments in the town include: