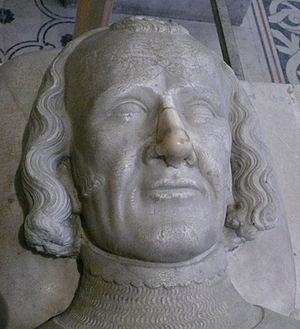 In April 1314 he married Jeanne of Joigny, who succeeded her father John II as Countess of Joigny in 1335, but died on 2 September 1336. They had no children.

He showed a marked, if foolhardy courage from the time of his first taking up arms (1324, in Aquitaine), and took part in the Battle of Cassel (1328).

He entered the War of the Breton Succession in 1340, and was subsequently killed at the Battle of Crécy.[1] Like his father, he was buried in the now-demolished church of the Couvent des Jacobins in Paris - his effigy is now in the Basilica of St Denis.

He was succeeded in Alençon by his eldest son Charles, and in Perche by his son Robert.