Christina Georgina Rossetti (5 December 1830 – 29 December 1894) was an English poet who wrote romantic, devotional and children's poems, including "Goblin Market" and "Remember". She also wrote the words of two Christmas carols well known in the UK: "In the Bleak Midwinter", later set by Gustav Holst and Harold Darke, and "Love Came Down at Christmas", also set by Darke and other composers. She was a sister of the artist and poet Dante Gabriel Rossetti and features in several of his paintings.

Christina Rossetti was born in Charlotte Street (now Hallam Street), London, to Gabriele Rossetti, a poet and a political exile from Vasto, Abruzzo, since 1824 and Frances Polidori, the sister of Lord Byron's friend and physician, John William Polidori.[1] She had two brothers and a sister: Dante Gabriel became an influential artist and poet, and William Michael and Maria both became writers.[1] Christina, the youngest, was a lively child. She dictated her first story to her mother before she had learned to write.[2][3]

Rossetti was educated at home by her mother and father, who had her study religious works, classics, fairy tales and novels. Rossetti delighted in the works of Keats, Scott, Ann Radcliffe and Matthew Lewis.[4] The influence of the work of Dante Alighieri, Petrarch and other Italian writers filled the home and deeply impacted Rossetti's later writing. Their home was open to visiting Italian scholars, artists and revolutionaries.[3] The family homes in Bloomsbury at 38 and later 50 Charlotte Street were within easy reach of Madam Tussauds, London Zoo and the newly opened Regent's Park, which she visited regularly; in contrast to her parents, Rossetti was very much a London child, and, it seems, a happy one.[3][4] 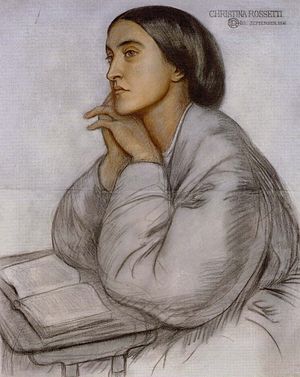 In the 1840s, her family faced severe financial difficulties due to the deterioration of her father's physical and mental health. In 1843, he was diagnosed with persistent bronchitis, possibly tuberculosis, and faced losing his sight. He gave up his teaching post at King's College and though he lived another 11 years, he suffered from depression and was never physically well again. Rossetti's mother began teaching to keep the family out of poverty and Maria became a live-in governess, a prospect that Christina Rossetti dreaded. At this time her brother William was working for the Excise Office and Gabriel was at art school, leaving Christina's life at home to become one of increasing isolation.[5] When she was 14, Rossetti suffered a nervous breakdown and left school. Bouts of depression and related illness followed. During this period she, her mother and her sister became absorbed in the Anglo-Catholic movement that developed in the Church of England. Religious devotion came to play a major role in Rossetti's life.

In her late teens, Rossetti became engaged to the painter James Collinson, the first of three suitors. He, like her brothers Dante and William, was a founding member of the avant-garde Pre-Raphaelite Brotherhood, founded in 1848.[6] The engagement was broken in 1850 when he reverted to Catholicism. In 1853, when the Rossetti family was in continuing financial difficulties, Christina helped her mother keep a school in Fromefield, Frome, but it did not succeed. A plaque commemorates the house.[7] In 1854 the pair returned to London, where Christina's father died.[8] She later became involved with the linguist Charles Cayley, but declined to marry him, also for religious reasons.[6] The third offer came from the painter John Brett, whom she likewise refused.[3]

Rossetti sat for several of Dante Gabriel Rossetti's best-known paintings. In 1848, she sat for the Virgin Mary in his first completed oil painting, The Girlhood of Mary Virgin, and the first work he inscribed with the initials "PRB", later revealed to mark the Pre-Raphaelite Brotherhood.[9] The following year she modelled for his depiction of the Annunciation, Ecce Ancilla Domini. A line from her poem "Who shall deliver me?" inspired a famous painting by Fernand Khnopff called I lock my door upon myself. In 1849 she became seriously ill again with depression, and sometime around 1857 had a major religious crisis.[3] 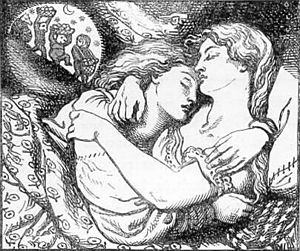 Illustration for the cover of Christina Rossetti's Goblin Market and Other Poems (1862), by her brother Dante Gabriel Rossetti

Rossetti began writing down and dating her poems from 1842, most of which imitated her favoured poets. In 1847 she began experimenting with verse forms such as sonnets, hymns and ballads, while drawing narratives from the Bible, folk tales and the lives of saints. Her early pieces often feature meditations on death and loss, in the Romantic tradition.[4] Her first two poems published were "Death's Chill Between" and "Heart's Chill Between", in the Athenaeum in 1848, when she was 18.[10][11] She used the pseudonym "Ellen Alleyne" in the literary magazine, The Germ, published by the Pre-Raphaelites from January to April 1850 and edited by her brother William.[1] This marked the beginning of her public career.[12]

Rossetti's more critical reflections on the artistic movement begun by her brother find expression in her 1856 poem "In the Artist's Studio". Here she reflects on seeing multiple paintings of the same model. For Rossetti, the artist's idealised vision of the model's character begins to overwhelm his work, until "every canvas means/the one same meaning."[13] Dinah Roe, in her introduction to the Penguin Classics collection of Pre-Raphaelite poetry, argues that this critique of her brother and similar male artists is less about "the objectification of women" as about "the male artist's self-worship".[14]

Rossetti's most famous collection, Goblin Market and Other Poems, appeared in 1862, when she was 31. It received widespread critical praise, establishing her as the foremost female poet of the time. Hopkins, Swinburne and Tennyson lauded her,[12] and with the death of Elizabeth Barrett Browning in 1861 she was hailed as her natural successor.[12] The title poem is one of Rossetti's best known. Although it is ostensibly about two sisters' misadventures with goblins, critics have interpreted the piece in a variety of ways, seeing it as an allegory about temptation and salvation, a commentary on Victorian gender roles and female agency, and a work about erotic desire and social redemption. Rossetti was a volunteer worker from 1859 to 1870 at the St Mary Magdalene house of charity in Highgate, a refuge for former prostitutes, and it is suggested that Goblin Market may have been inspired by the "fallen women" she came to know.[15] There are parallels with Coleridge's The Rime of the Ancient Mariner in both poems' religious themes of temptation, sin and redemption by vicarious suffering.[16] Swinburne in 1883 dedicated A Century of Roundels to Rossetti, as she adopted his roundel form in a number of poems, for instance in Wife to Husband.[17] She was ambivalent about women's suffrage, but many scholars have found feminist themes in her poetry.[18] She opposed slavery in the United States, cruelty to animals (in the prevalent practice of animal experimentation), and the exploitation of girls in under-age prostitution.[19]

Rossetti maintained a large circle of friends and correspondents, and continued to write and publish for the rest of her life, focusing mainly on devotional writing and children's poetry. In 1892, she wrote The Face of the Deep, a book of devotional prose, and oversaw production of a new and enlarged edition of Sing-Song in 1893.[20]

When I am dead, my dearest,
Sing no sad songs for me;
Plant thou no roses at my head,
Nor shady cypress tree:
Be the green grass above me
With showers and dewdrops wet:
And if thou wilt, remember,
And if thou wilt, forget.

I shall not see the shadows,
I shall not feel the rain;
I shall not hear the nightingale
Sing on as if in pain:
And dreaming through the twilight
That doth not rise nor set,
Haply I may remember,
And haply may forget.

In the later decades of her life, Rossetti suffered from a type of hyperthyroidism – Graves' disease – diagnosed in 1872, suffering a near-fatal attack in the early 1870s.[1][3] In 1893, she developed breast cancer. The tumour was removed, but there was a recurrence in September 1894.[22]

She died on 29 December 1894 and was buried on New Year's Day 1895 in the Rossetti family grave on the west side of Highgate Cemetery.[20][23] In the grave she joined her father, mother and Elizabeth Siddal, wife of her brother Dante Gabriel. Her brother William was also buried there in 1919, and subsequently, so were the ashes of four other family members.

There is a stone tablet on the façade of 30 Torrington Square, Bloomsbury, marking her final home, where she died.[24]

Although Rossetti's popularity in her lifetime did not approach that of her contemporary Elizabeth Barrett Browning, her standing remained strong after her death. Her popularity faded in the early 20th century in the wake of Modernism, but scholars began to explore Freudian themes in her work, such as religious and sexual repression, reaching for personal, biographical interpretations of her poetry.[3] Academics beginning to study her work again in the 1970s looked beyond the lyrical Romantic sweetness to her mastery of prosody and versification. Feminists held her as symbol of constrained female genius and placed her as a leader of 19th-century poets.[1][3] Her writings strongly influenced those of such writers as Ford Madox Ford, Virginia Woolf, Gerard Manley Hopkins, Elizabeth Jennings, and Philip Larkin. The critic Basil de Selincourt called her "all but our greatest woman poet... incomparably our greatest craftswoman... probably in the first twelve of the masters of English verse."[3][25]

The year stood at its equinox,
And bluff the North was blowing.
A bleat of lambs came from the flocks,
Green hardy things were growing.
I met a maid with shining locks,
Where milky kine were lowing.

She wore a kerchief on her neck,
Her bare arm showed its dimple.
Her apron spread without a speck,
Her air was frank and simple.

“
”
From "The Milking-Maid" poem by Christina Georgina Rossetti[26]

Rossetti's Christmas poem "In the Bleak Midwinter" became widely known in the English-speaking world after her death, when it was set as a Christmas carol, first by Gustav Holst and later by Harold Darke.[27] Her poem "Love Came Down at Christmas" (1885) has also been widely arranged as a carol.[28][29] "Up-Hill" is an allegorical poem that compares human life with a painful journey.

In 1918, John Ireland set eight of her poems from Sing-Song: A Nursery Rhyme Book to music in his song cycle Mother and Child. The title of J. K. Rowling's novel The Cuckoo's Calling is based on a line in Rossetti's poem A Dirge.[30] The poem "Song" was an inspiration for Bear McCreary to write his musical composition When I Am Dead, published in 2015.[31] Two of Rossetti's poems, "Where Sunless Rivers Weep" and "Weeping Willow" were set to music by Barbara Arens in her All Beautiful & Splendid Things: 12 + 1 Piano Songs on Poems by Women (2017, Editions Musica Ferrum).

In 2000, as one of the many Millennium projects across the country, a poetry stone was placed in what used to be the grounds of North Hill House in Frome. On one side is an excerpt from her poem, "What Good Shall My Life Do Me": "Love lights the sun: love through the dark/Lights the moon's evanescent arc:/Same Love lights up the glow-worms spark." She wrote of her brief stay in Frome, which had "an abundance of green slopes and gentle declivities: no boldness or grandeur but plenty of peaceful beauty."[32]

Christina is commemorated in the Church of England on 27 April.[35] 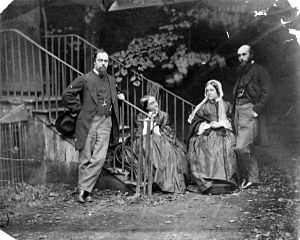