From Infogalactic: the planetary knowledge core
Jump to: navigation, search
For other uses, see Courtesan (disambiguation).

A courtesan was originally a courtier, which means a person who attends the court of a monarch or other powerful person.[1]

In feudal society, the court was the centre of government as well as the residence of the monarch, and social and political life were often completely mixed together. Prior to the Renaissance, courtesans served to convey information untrusted to servants to visiting dignitaries. In Renaissance Europe, courtiers played an extremely important role in upper-class society. As it was customary during this time for royal couples to lead separate lives—commonly marrying simply to preserve bloodlines and to secure political alliances—men and women would often seek gratification and companionship from people living at court. In fact, the verb to court originally meant "to be or reside at court", and later came to mean "to behave as a courtier" and then courtship, or "to pay amorous attention to somebody".[2] The most intimate companion of a ruler was called the favourite.[citation needed]

In Renaissance usage, the Italian word cortigiana, feminine of cortigiano ("courtier") came to refer to a person who attends the court, and then to a well-educated and independent woman, eventually a trained artist or artisan of dance and singing, especially one associated with wealthy, powerful, or upper-class society who provided luxuries and status in exchange for entertainment and companionship.[3] The word was borrowed by English from Italian through the French form "courtisane" during the 16th century, especially associated to the meaning of "donna di palazzo".[1]

A male figure comparable to the courtesan was the Italian cicisbeo, the French chevalier servant, the Spanish cortejo or estrecho. It actually seems that the figure of the chevalier servant (French, literally "serving cavalier", lady's escort) of a married lady was quite common in Europe up to the 18th century.[4]

The courtesans of East Asia, particularly those of the Japanese empire, held a different social role than that of their European counterparts. Examples of Japanese courtesans included the Oiran class, who were more focused on the aspect of entertainment in comparison with European courtesans.[5]

Today, the term courtesan has become a euphemism to designate a comforter, escort, mistress or a prostitute, especially one of dignified etiquette who attracts wealthy, powerful, or influential clients.[why?] 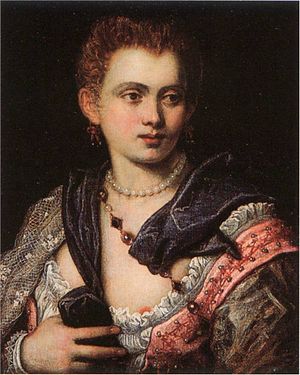 The cortigiane oneste were usually well-educated and worldly (sometimes even more so than the average upper-class woman), and often held simultaneous careers as performers or artists. They were typically chosen on the basis of their "breeding"—social and conversational skills, intelligence, common-sense, and companionship—as well as their physical attributes. It was usually their wit and personality that set them apart from regular women. Sex constituted only a facet of the courtesan's array of services. For example, they were well-dressed and ready to engage and participate in a variety of topics ranging from art to music to politics.

In some cases, courtesans were from well-to-do backgrounds, and were even married—but to husbands lower on the social ladder than their clients. In these cases, their relationships with those of high social status had the potential to improve their spouses' status—and so, more often than not, the husband was aware of his wife's profession and dealings.[6]

Courtesans from non-wealthy backgrounds provided charming companionship for extended periods, no matter what their own feelings or commitments might have been at the time, and sometimes had to be prepared to do so on short notice. They were also subject to lower social status, and often religious disapproval, because of the perceived immoral aspects of their profession and their reliance upon courtisanerie as a primary source of income. In cases like this, a courtesan was solely dependent on her benefactor or benefactors financially, making her vulnerable; Cora Pearl is a good example.

Often, courtesans serving in this capacity began their career as a prostitute, or were passed from one benefactor to another, thereby resulting in them being viewed in society circles as lower than both their benefactor and those of wealth and power with whom they would socialize. Often, in instances of this sort, if the courtesan had satisfactorily served a benefactor, that benefactor would, when ending the affair, pass them on to another benefactor of wealth as a favor to the courtesan, or set them up in an arranged marriage to a semi-wealthy benefactor. In the event that the courtesan had angered or dissatisfied a benefactor, they would often find themselves cast out of wealthy circles, returning more often than not to street prostitution.

For social or political benefits

Those from wealthy backgrounds, either by birth or marriage, and who were acting as courtesans only for the social or political advancement of themselves and/or their spouses were generally treated as equals. They were more respected by their extramarital companions, both placing one another's family obligations ahead of the relationship and planning their own liaisons or social engagements around the lovers' marital obligations.

Affairs of this sort would often be short-lived, ending when either the courtesan or the courtesan's spouse received the status or political position desired, or when the benefactor chose the company of another courtesan, and compensated the former companion financially. In instances like this, it was often viewed simply as a business agreement by both parties involved. The benefactor was aware of the political or social favors expected by the courtesan, the courtesan was aware of the price expected from them for those favors being carried out, and the two met one another's demands, an example being Madame de Pompadour.

This was generally a safe affair, as both the benefactor's spouse and the courtesan's spouse usually were fully aware of the arrangement, and the courtesan was not solely dependent on the benefactor. It, rather, was simply an affair of benefits gained for both those involved. Publicly and socially, affairs of this sort were common during the 17th, 18th and 19th centuries, as well as the early 20th century, and were generally accepted in wealthy circles.[6]

Very often, courtesans would betray one another in acts of political intrigue in attempts to climb into higher positions of power within royal courts. There are many cases throughout history where one courtesan would attempt (sometimes successfully) to supplant the mistress to a king or emperor. This was typically preceded by her discrediting the ruler's companion, often by divulging secrets that could lead to her rival being cast aside and replaced by her. However, this was a delicate process, and if a courtesan of "lower status" attempted to replace a courtesan who wielded a substantial amount of power within the court, it would often result in the lower courtesan being exiled from the royal court, or married off to a lesser noble in an arranged marriage, or even murdered. There are also many examples of courtesans who took advantage of their involvement with powerful individuals, which usually ended in their downfall.[citation needed]

In later centuries, from the mid-18th century on, courtesans would often find themselves cast aside by their benefactors, but the days of public execution or imprisonment based on their promiscuous lifestyle were over. There are many examples of courtesans who, by remaining discreet and respectful to their benefactors, were able to extend their careers into or past middle age and retire financially secure; Catherine Walters is a good example. By the late 19th century, and for a brief period in the early 20th century, courtesans had reached a level of social acceptance in many circles and settings, often even to the extent of becoming a friend and confidant to the wife of their benefactor.[6]

More often than not, a woman serving as a courtesan would last in that field only as long as she could prove herself useful to her companion, or companions. This, of course, excludes those who served as courtesans but who were already married into high society. When referring to those who made their service as a courtesan as their main source of income, success was based solely on financial management and longevity. Many climbed through the ranks of royalty, serving as mistress to lesser nobles first, eventually reaching the role of mistress to a king or prince. Others were able to obtain such a high position early on, but few lasted long, and after serving a prince or king there was nowhere to go but down.

Pietro Aretino, an Italian Renaissance writer, wrote a series of dialogues (Capricciosi ragionamenti) in which a mother teaches her daughter what options are available to women and how to be an effective courtesan. The French novelist Balzac wrote about a courtesan in his Splendeurs et misères des courtisanes (1838–47). Emile Zola likewise wrote a novel, Nana (1880), about a courtesan in nineteenth-century France.

17th century and before 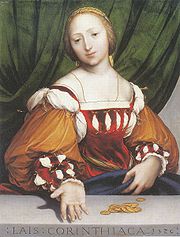 Lais of Corinth by Hans Holbein the Younger, Kunstmuseum Basel 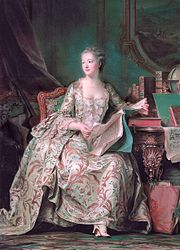 In addition to the list above, the term "courtesan" has often been used in a political context in an attempt to damage the reputation of a powerful woman, or disparage her importance. Because of this, there is still much historical debate over whether certain women in history can be referred to as courtesans. For example, the title was applied to the Byzantine empress Theodora, who had started life as an erotic actress but later became the wife of the Emperor Justinian and, after her death, an Orthodox saint. The term has also been applied to influential women like Anne Boleyn, Madaline Bishop, Diane de Poitiers, Mathilde Kschessinska, Pamela Harriman, Eva Perón and Gabrielle "Coco" Chanel. The attempt to define such women as courtesans is often intended to draw attention to certain perceived qualities, ambitions or conduct which are held to be courtesan-like.