From Infogalactic: the planetary knowledge core
Jump to: navigation, search
This article is about the stone chambers called "crypts". For other uses, see Crypt (disambiguation). 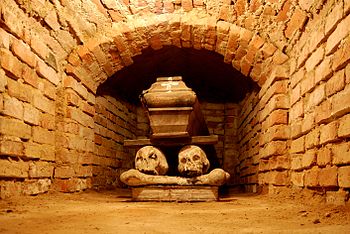 A crypt (from Latin crypta "vault") is a stone chamber beneath the floor of a church or other building. It typically contains coffins, sarcophagi, or religious relics.

Originally, crypts were typically found below the main apse of a church, such as at the Abbey of Saint-Germain en Auxerre, but were later located beneath chancel, naves and transepts as well. Occasionally churches were raised high to accommodate a crypt at the ground level, such as St Michael's Church in Hildesheim, Germany.

"Crypt" developed as an alternative form of the Latin crypta "vault" as it was carried over into Late Latin, and came to refer to the ritual rooms found underneath church buildings. It also served as a vault for storing important and/or sacred items.

"Crypta", however, is also the female form of crypto "hidden". The earliest known origin of both is in the Ancient Greek κρύπτω (krupto/krypto), the first person singular indicative of the verb "to conceal, to hide".

First known in the early Christian period, in particular North Africa at Chlef and Djemila in Algeria, and Byzantium at Saint John Studio in Constantinople. Where Christian churches have been built over mithraea, the mithraeum has often been adapted to serve as a crypt.

The famous crypt at Old St. Peter's Basilica, Rome, developed about the year 600, as a means of affording pilgrims a view of Saint Peter's tomb, which lay, according to the Roman fashion, directly below the high altar. The tomb was made accessible through an underground passageway beneath the sanctuary, where pilgrims could enter at one stair, pass by the tomb and exit, without interrupting the clerical community's service at the altar directly above.[1]

Crypts were introduced into Frankish church building in the mid-8th century, as a feature of its Romanization. Their popularity then spread more widely in western Europe under Charlemagne. Examples from this period are most common in the early medieval West, for example in Burgundy at Dijon and Tournus.

After the 10th century the early medieval requirements of a crypt faded, as church officials permitted relics to be held in the main level of the church. By the Gothic period crypts were rarely built, however burial vaults continued to be constructed beneath churches and referred to as crypts. 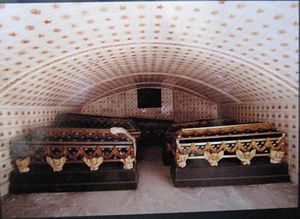 Early color photo of the family vault of the Swedish royal dynasty of Bernadotte.

In more modern terms, a crypt is most often a stone chambered burial vault used to store the deceased. Crypts are usually found in cemeteries and under public religious buildings, such as churches or cathedrals, but are also occasionally found beneath mausolea or chapels on personal estates. Wealthy or prestigious families will often have a 'family crypt' or 'vault' in which all members of the family are interred. Many royal families, for example, have vast crypts containing the bodies of dozens of former royalty. In some localities an above ground crypt is more commonly called a mausoleum, which also refers to any elaborate building intended as a burial place, for one or any number of people.

There was a trend in the 19th century of building crypts on medium to large size family estates, usually subtly placed on the edge of the grounds or more commonly incorporated into the cellar. After a change of owner these are often blocked up and the house deeds will not allow this area to be re-developed.