From Infogalactic: the planetary knowledge core
Jump to: navigation, search
For other uses, see Martyr (disambiguation). 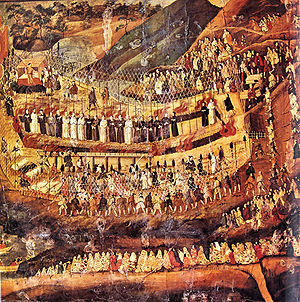 A martyr (Greek: μάρτυς, mártys, "witness"; stem μάρτυρ-, mártyr-) is somebody who suffers persecution and/or death for advocating, renouncing, refusing to renounce, and/or refusing to advocate a belief or cause of either a religious or secular nature as demanded by an external party. This refusal to comply with the presented demands results in the punishment or execution of the martyr by the oppressor.

Most martyrs are considered holy or are respected by their followers, becoming symbols of exceptional leadership and heroism in the face of difficult circumstances. Martyrs play significant roles in religions. Similarly, martyrs have had notable effects in secular life, including specific figures such as Socrates, as well as in politics and Chinese culture.

In its original meaning, the word martyr, meaning witness, was used in the secular sphere as well as in the New Testament of the Bible.[1] The process of bearing witness was not intended to lead to the death of the witness, although it is known from ancient writers (e.g. Josephus) and from the New Testament that witnesses often died for their testimonies.

During the early Christian centuries, the term acquired the extended meaning of a believer who is called to witness for their religious belief, and on account of this witness, endures suffering and/or death. The term, in this later sense, entered the English language as a loanword. The death of a martyr or the value attributed to it is called martyrdom.

The word martyr is used in English to describe a wide variety of people. However, the following table presents a general outline of common features present in stereotypical martyrdoms.

Despite the promotion of ahimsa (non-violence) within Sanatana Dharma, there is also the concept of righteous duty (dharma), where violence is used as a last resort to resolution after all other means have failed. Examples of this are found in the Mahabharata. Upon completion of their exile, the Pandavas were refused the return of their portion of the kingdom by their cousin Duruyodhana; and following which all means of peace talks by Krishna, Vidura and Sanjaya failed. During the great war which commenced, even Arjuna was brought down with doubts, e.g., attachment, sorrow, fear. This is where Krishna instructs Arjuna how to carry out his duty as a righteous warrior and fight. 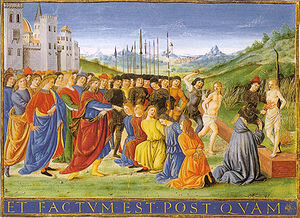 Martyrdom in Judaism is one of the main examples of Kiddush Hashem, meaning "sanctification of God's name" through public dedication to Jewish practice. Religious martyrdom is considered one of the more significant contributions of Hellenistic Judaism to Western Civilization. 1 Maccabees and 2 Maccabees recount numerous martyrdoms suffered by Jews resisting Hellenizing (adoption of Greek ideas or customs of a Hellenistic civilization) by their Seleucid overlords, being executed for such crimes as observing the Sabbath, circumcising their boys or refusing to eat pork or meat sacrificed to foreign gods. According to W. H. C. Frend, "Judaism was itself a religion of martyrdom" and it was this "Jewish psychology of martyrdom" that inspired Christian martyrdom. 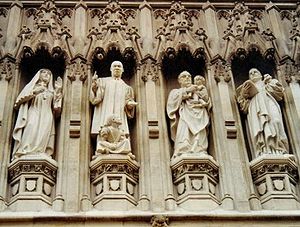 In Christianity, a martyr, in accordance with the meaning of the original Greek martys in the New Testament, is one who brings a testimony, usually written or verbal. In particular, the testimony is that of the Christian Gospel, or more generally, the Word of God. A Christian witness is a biblical witness whether or not death follows.[7] However, over time many Christian testimonies were rejected, and the witnesses put to death, and the word martyr developed its present sense. Where death ensues, the witnesses follow the example of Jesus in offering up their lives for truth. 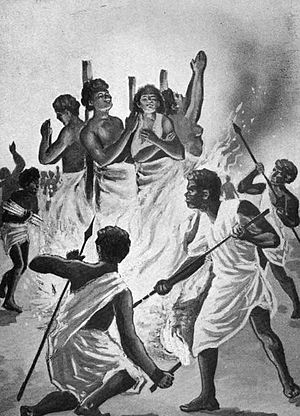 Christian martyrs burned at the stake by Ranavalona I in Madagascar

The concept of Jesus as a martyr has recently received greater attention. Analyses of the Gospel passion narratives have led many scholars to conclude that they are martyrdom accounts in terms of genre and style.[8][9][10] Several scholars have also concluded that Paul the Apostle understood Jesus' death as a martyrdom.[11][12][13][14][15][16] In light of such conclusions, some have argued that the Christians of the first few centuries would have interpreted the crucifixion of Jesus as a martyrdom.[5][17]

In the context of church history, from the time of the persecution of early Christians in the Roman Empire, it developed that a martyr was one who was killed for maintaining a religious belief, knowing that this will almost certainly result in imminent death (though without intentionally seeking death). This definition of martyr is not specifically restricted to the Christian faith. The first Christian witness to be killed for his testimony was Saint Stephen (whose name means "crown"), and those who suffer martyrdom are said to have been "crowned." From the time of Constantine Christianity became the religion of the realm and there was less and less persecution. As some wondered how then they could most closely follow Christ there was a development of desert spirituality, desert monks, self-mortification, ascetics, (Paul the Hermit, St. Anthony), following Christ by separation from the world. This was a kind of white martyrdom, dying to oneself every day, as opposed to a red martyrdom, the giving of one's life in a violent death.[18]

In Christianity death in sectarian persecution, can be viewed as martyrdom. For example, there were martyrs recognised on both sides of the schism between the Roman Catholic Church and the Church of England, with two hundred and eighty Christians martyred for their faith by public burning between 1553 and 1558 by the Roman Catholic Queen Mary I in England leading to the split with Rome in 1559 and then three hundred Roman Catholics martyred by the Church authorities in England over the following hundred and fifty years in the sixteenth and seventeenth centuries.

Even more modern day accounts of martyrdom for Christ exist, depicted in books such as Jesus Freaks though the numbers are disputed. There are claims that the numbers of Christians killed for their faith annually are greatly exaggerated.[19] 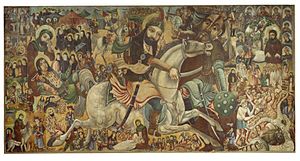 The painting by commemorating the martyrdom of Shia Imam Husayn ibn Ali at the Battle of Karbala, 680 AD
Main article: Shahid

In Arabic, a martyr is termed Shahid. Shahid appears in the Quran in a variety of contexts, including witnessing to righteousness, witnessing a financial transaction and being killed, even in an accident as long as it doesn't happen with the intention to commit a sin, when they are believed to remain alive making them witnesses over worldly events without taking part in them anymore (Quran 3:140). The word also appears with these various meanings in the hadith, the sayings of Muhammad. The Greek origin of the word also means 'witness.'

Islam views a martyr as a man or woman who dies while conducting jihad, whether on or off the battlefield (see greater jihad and lesser jihad).[20] However, opinions in the Muslim world vary widely on whether suicide bombers can count as martyrs. Few Muslims believe that suicide bombing can be justified.[21] 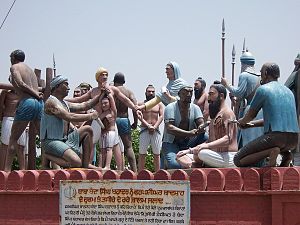 Sculpture at Mehdiana Sahib of the execution of Banda Singh Bahadur by Indian Muslims in 1716
Main article: Martyrdom in Sikhism

Martyrdom (called shahadat in Punjabi) is a fundamental concept in Sikhism and represents an important institution of the faith. The Sikh Gurus and the Sikhs that followed them are some of the greatest examples of martyrs who fought [22] against Mughal tyranny and oppression, upholding the fundamentals of Sikhism, where their lives were taken during non-violent protesting or in battles. Sikhism believes in Ibaadat se Shahadat (from love to martyrdom). Some famous Sikh martyrs include:[23]

In the Bahá'í Faith, martyrs are those who sacrifice their lives serving humanity in the name of God.[25] However, Bahá'u'lláh, the founder of the Bahá'í Faith, discouraged the literal meaning of sacrificing one's life. Instead, he explained that martyrdom is devoting oneself to service to humanity.[25]

Martyrdom was extensively promoted by the Tongmenghui and the Kuomintang party in modern China, revolutionaries who died fighting against the Qing dynasty in the Xinhai Revolution and throughout the Republic of China period, furthering the cause of the revolution, were recognized as martyrs.

The cult of the revolutionary martyr was also strongly developed in Vietnam and North Korea. 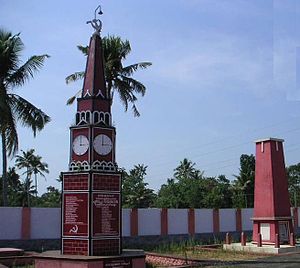 A political martyr is someone who suffers persecution and/or death for advocating, renouncing, refusing to renounce, and/or refusing to advocate a political belief or cause, usually during times of recently installed dictatorship.

The Manchester Martyrs were three Irishmen executed after being condemned for association with the killing of a policeman in Manchester, England in 1867. The day after the executions, Frederick Engels wrote to Karl Marx: "Yesterday morning the Tories, by the hand of Mr Calcraft, accomplished the final act of separation between England and Ireland. The only thing that the Fenians still lacked were martyrs. ... To my knowledge, the only time that anybody has been executed for a similar matter in a civilised country was the case of John Brown at Harpers Ferry. The Fenians could not have wished for a better precedent."[26]

The Tolpuddle Martyrs were a group of 19th century agricultural labourers in Dorset, England, who were arrested for and convicted of swearing a secret oath as members of the Friendly Society of Agricultural Labourers. The rules of the society showed it was clearly structured as a friendly society, that is, a mutual association for the purposes of insurance, pensions, savings or cooperative banking; and it operated as a trade-specific benefit society. But at the time, friendly societies had strong elements of what are now considered to be the principal role of trade unions, and wages were at issue. The Tolpuddle Martyrs were sentenced not to death but to transportation to Australia, a harsh form of exile.[27]

The Belfiore martyrs (in Italian, Martiri di Belfiore) were a group of Italian pro-independence fighters condemned to death by hanging in 1853 during the Italian Risorgimento. They included Tito Speri and the priest Enrico Tazzoli and are named after the site where the sentence was carried out, in the valley of Belfiore at the south entrance to Mantua.