A death march is a forced march of prisoners of war or other captives or deportees with the intent to kill, brutalize, weaken and/or demoralize as many of the captives as possible along the way.[citation needed] It is distinguished in this way from simple prisoner transport via foot march. Death marches usually feature harsh physical labor and abuse, neglect of prisoner injury and illness, deliberate starvation and dehydration, humiliation and torture, and execution of those unable to keep up the marching pace. The march may end at a prisoner-of-war camp or internment camp, or it may continue until all the prisoners are dead (a form of "execution by labor", as seen in the Armenian genocide among other examples).

The signing of the Fourth Geneva Convention[1] made death marches a form of war crime.

We passed a slave woman shot or stabbed through the body and lying on the path. [Onlookers] said an Arab who passed early that morning had done it in anger at losing the price he had given for her, because she was unable to walk any longer.[2] 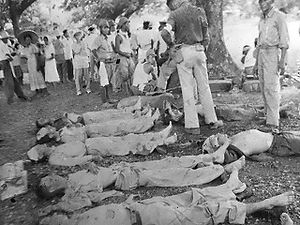 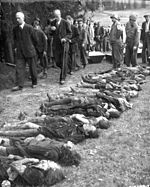 May 11, 1945 German civilians are forced to walk by the bodies of 96 Jewish women murdered by German SS troops in a 500-kilometre (300 mi) death march from Helmbrecht to Volary.