From Infogalactic: the planetary knowledge core
Jump to: navigation, search
For other uses, see Wittenberg (disambiguation).

Wittenberg, officially Lutherstadt Wittenberg, is a city in Saxony-Anhalt, Germany. Situated on the river Elbe, it has a population of about 50,000.

The importance of Wittenberg historically was due to its seat of the Elector of Saxony, a dignity held by the dukes of Saxe-Wittenberg and also to its close connection with Martin Luther and the dawn of the Protestant Reformation; several of its buildings are associated with the events of this time. Part of the Augustinian monastery in which Luther dwelt, first as a monk and later as owner with his wife and family, is preserved and considered to be the world's premier museum dedicated to Luther. Various Luther and Melanchthon memorial sites were added to the UNESCO world heritage list in 1996. 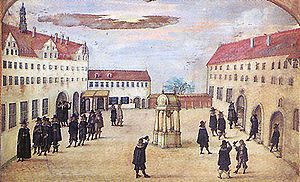 University of Wittenberg in 1644

A settlement was first mentioned in 1180 as a small village founded by Flemish colonists under the rule of the House of Ascania. In 1260, this village became the residence of the dukes of Saxe-Wittenberg, and in 1293 the settlement was granted its town charter as a free-standing town.

Wittenberg developed into an important trade center during the following several centuries, because of its central location. When the Ascanians died out, the property of Saxe-Wittenberg passed to the House of Wettin. This town became an important regional political and cultural center at the end of the 15th Century, when Frederick III "the Wise", the Elector of Saxony, made his residence in Wittenberg. Several parts of boundaries of the town were extended soon afterward. The second bridge over the Elbe River was built from 1486 through 1490 and the castle church (the Schlosskirche in German) was erected from 1496 through 1506. The Elector's palace was rebuilt the same time.

In 1502, the University of Wittenberg was founded, and it gave a home to some important thinkers, such as Martin Luther—a professor of theology beginning in 1508—and Philipp Melanchthon—a professor of Greek starting in 1518.

On 31 October 1517, Luther nailed his 95 theses against the selling of indulgences at the door of the All Saints', the Castle Church, marking the beginning of the Protestant Reformation. The Anabaptist movement also had one of its earliest homes in Wittenberg, when the Zwickau prophets moved there in late 1521, only to be suppressed by Luther when he returned from the Wartburg in spring 1522. The Capitulation of Wittenberg (1547) is the name given to the treaty by which John Frederick the Magnanimous was compelled to resign the electoral dignity and most of his territory to the Albertine branch of the House of Wettin.

In 1760, during the Seven Years' War, the Prussian-occupied town was bombarded by the Austrians. It was occupied by the French in 1806, and refortified in 1813 by command of Napoleon. In 1814, it was stormed by the Prussian Army under Tauentzien, who received the title of "von Wittenberg" as a reward. In 1815, Wittenberg became part of Prussia and was administered within the Province of Saxony. Wittenberg continued to be a fortress of the third class until the reorganisation of German defences after the foundation of the new German Empire led to its being dismantled in 1873.

Unlike many other historic German cities during World War II, Wittenberg's city centre was spared destruction during the war. The Allies agreed not to bomb Wittenberg, though there was fighting in the city, with bullet pock-marks visible on the statues of Luther and Melanchthon at the market square, or so the popular version of the city's history goes. In actuality, the Luther statue was not even present in the city square during much of the war. It was stored at Luther Brunnen, a roadhouse only a few kilometers north of the city.

Wittenberg's reputation as a city protected from Allied bombing is also not historically accurate. On the outskirts of Wittenberg was the Arado Flugzeugwerke (the Arado Aircraft Factory), which produced components of airplanes for the Luftwaffe. This factory was staffed by Jews, Russians, Poles, political prisoners and even a few Americans—all prisoners engaging in forced labour. Despite the prisoner status of its workers, American and British planes bombed the factory near the end of the war. One thousand prisoner workers were killed. The recent publication of "...und morgen war Krieg!" by Renate Gruber-Lieblich attempts to document this tragic bombing of Wittenberg.

At the end of the war, Wittenberg was occupied by Soviet forces and became part of East Germany in 1949. During the East German period, it was part of Halle District. By means of the peaceful revolution in 1989, the communist regime was brought down and the city has been governed democratically since 1990.

Wittenberg is home to numerous historical sites, as well as portraits and other paintings by Lucas Cranach the Elder and Younger. On the doors of All Saints' Church, the Schlosskirche ("castle church", built in 1496–1506) Luther is said to have nailed his 95 theses in 1517. It was seriously damaged by fire in 1760 during a bombardment by the French during the Seven Years' War, was practically rebuilt, and was later (1885–1892) restored. The wooden doors, burnt in 1760, were replaced in 1858 by bronze doors, bearing the Latin text of the theses. Inside the church are the tombs of Luther and Philipp Melanchthon, and of the electors Frederick the Wise (by Peter Vischer the Younger, 1527) and John the Constant (by Hans Vischer), and portraits of the reformers by Lucas Cranach the Younger.

St. Mary's Church, the parish church in which Luther often preached, was built in the 14th century, but has been much altered since Luther's time. It contains a magnificent painting by Lucas Cranach the Elder, representing the Last Supper (with the faces of Luther and other reformers), Baptism and Confession, also a font by Hermann Vischer the Elder (1457). In addition, there are numerous historic paintings in the church.

The ancient electoral palace is another of the buildings that suffered severely in 1760; it now contains archives.

Martin Luther's home, the Lutherhaus, where he studied and lived both before and after the Reformation, is now a museum containing many artifacts from his life. Melanchthon's house and the house of Lucas Cranach the Elder, mayor of Wittenberg, can also be found here. Statues of Luther (by Schadow), Melanchthon and Bugenhagen embellish the town. The spot outside the Elster Gate where Luther publicly burned the papal bull in 1520 is marked by an oak tree. 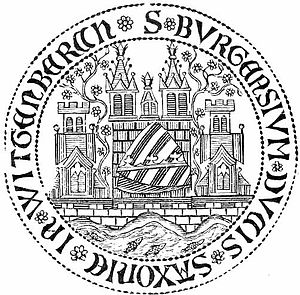 Wittenberg's civic coat of arms conveys with its various heraldic elements something of the town's history. On 27 June 1293, Wittenberg was granted town rights by Duke Albrecht II. There then arose a mediaeval town whose highest governing body was its council. This council, known to have existed as early as 1317, was given the job of administering the town in its care through law and legislation, and of handling the town's revenue. For documentation, the administration used its own seal. One version of what is believed to be the town's oldest town seal, which the council used, and which dated from the first half of the 14th century, set the pattern with its elements for various civic coats of arms down to the present day.

The coat of arms symbolizes, with its crenelated wall and the towers within and each side, a town that was already strongly fortified by 1409. The two shields in the centre form the coat of arms of the Electorate of Saxony with the Saxon arms on the right, whose gold and black stripes recall the Ascanian rulers' house colours with the Rautenkranz (literally "lozenge wreath", although it is no such thing, as can be seen at the Saxony article) across them symbolizing the town's founder Duke Albrecht II since 1262, when it appeared in his arms. The shield on the left is the Wittenberg district's arms. In 1356, Emperor Charles IV bestowed upon the Duke of Saxony-Wittenberg the honour of Elector. Wittenberg became an Electoral residence. The shield with its crossed swords stands for the office of "Arch-Marshal of the Holy Roman Empire" inextricably joined by the Electorate, brought to Wittenberg by Rudolf I. Both coats of arms continued to be used by the Wettins after the Ascanians died out. The flowing water at the foot of the shield symbolizes Wittenberg's location on the River Elbe. The fish is a salmon, which were once abundant in the Elbe. The fishermen, like all professions in town, got their own order in 1422, and the fish found its way onto their coat of arms.

The City is an important centre of chemical industry with the de (SKW Stickstoffwerke Piesteritz GmbH). The whole area of the industrial park covers more than 220 hectares with more than 1,500 workers. Wittenberg is also the headquarters of the eco-friendly web search engine Ecosia. Tourism plays a major role. Wittenberg is one of the top destinations in Saxony-Anhalt.

Lutherstadt Wittenberg station is the main railway station. It connects Wittenberg hourly with Berlin to the north and Leipzig and Halle (Saale) to the south. The station is being rebuilt. Construction should be completed in 2017. 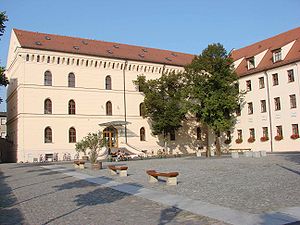 Wittenberg has a long tradition of cultural events. The City Theatre (Mitteldeutsches Landestheater) reached a great importance in GDR times. Since 1996, the City has staged open-air theatre shows based on the Lutheran history still alive in many historical places of the ancient town. As highlights, in 2001 and 2005, Fernando Scarpa became the artistic director of the "Bühne Wittenberg" (Stage Wittenberg), a project for theatre, art and culture in the whole of Germany which attracts to the city plenty of audience and whose success achieves European echo. On 2002 and 2003 Stefano Vagnini, Italian composer and organist created the music for Thesys and Luther Stories. Prince Hamlet is said to have studied in Wittenberg and it was the supposed home of Dr Faustus.

Wittenberg is seat of the Leucorea which is part of the Martin Luther University of Halle-Wittenberg, the largest university in Saxony-Anhalt.

Wittenberg is twinned with: