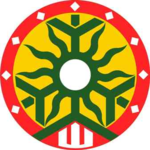 The redos ratas symbol, logo of the Kurono Academy of Baltic Priesthood.

Druwi (Old Prussian word meaning "Faith", cognate to tree;[1] Samogitian: Druwē) is a Baltic ethnic religious revival claiming Old Prussian origins,[2] and mostly present in Lithuania. Adherents uphold that it is distinct from Romuva, and that Romuva could be considered as a specific form of Druwi.[2]

The religion is primarily represented institutionally by the "Kurono Academy of Baltic Priesthood" (Lithuanian: Baltųjų žynių mokykla Kurono) founded in 1995.[3] It trains morally mature men and women from the age of 18, into the Darna, as priests of the Baltic people.[3] Like the Romuvans, they recognise Vydūnas as their founding father.[2]

Old Prussian druwi, meaning "belief", is a cognate word of "tree" and "druid", all stemming from the Indo-European root *deru-, *drew- meaning "tree", "oak tree", "strong", "firm".[1] This root gives many cognate words in the various Indo-European languages, all conveying to the meaning of "firmness", "stability", such as the Latin dūrus "hard", the Greek droón "firm", "strong", but also "true", "truth", "trust" as in Old Norse trū and Old High German trūen, and finally also to the "godly tree", Vedic Sanskrit dēva-dāru of the Indo-European world-view.[1]

The proponents of Druwi have synthesised the philosophy of the movement in the "Druwi Four Noble Truths". The first one defines that everything is one deity, Dievas (God), who is at the same time the generator, sustainer and destroyer.[2] Dievas is the life itself who enlivens all things. The second noble truth concerns the nature of man, which is threefold: physical, vital, and divine.[2] The third noble truth is that the universe is sustained by Darna, "harmony", "order"; and finally the fourth of the Druwi noble truths is that time change is a cyclical base for stability, permitting the alternation of subjective and objective understanding on the one pivotal foundation.[2]