Time (styled within the magazine as TIME) is an American weekly news magazine published in New York City. It was founded in 1923 and for decades was dominated by Henry Luce, who built a highly profitable stable of magazines. A European edition (Time Europe, formerly known as Time Atlantic) is published in London and also covers the Middle East, Africa and, since 2003, Latin America. An Asian edition (Time Asia) is based in Hong Kong. The South Pacific edition, which covers Australia, New Zealand, and the Pacific Islands, is based in Sydney, Australia. In December 2008, Time discontinued publishing a Canadian advertiser edition.[2]

Time has the world's largest circulation for a weekly news magazine, and has a readership of 25 million, 20 million of which are based in the United States. 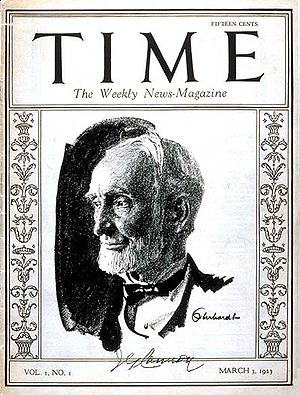 Time magazine was created in 1923 by Briton Hadden and Henry Luce, making it the first weekly news magazine in the United States.[6] The two had previously worked together as chairman and managing editor respectively of the Yale Daily News. They first called the proposed magazine Facts. They wanted to emphasize brevity, so that a busy man could read it in an hour. They changed the name to Time and used the slogan "Take Time–It's Brief".[7] Hadden was considered carefree and liked to tease Luce and saw Time as important but also fun, which accounted for its heavy coverage of celebrities (including politicians), the entertainment industry, and pop culture—criticized as too light for serious news.

It set out to tell the news through people, and for many decades the magazine's cover depicted a single person. The first issue of Time was published on March 3, 1923, featuring Joseph G. Cannon, the retired Speaker of the House of Representatives, on its cover; a facsimile reprint of Issue No. 1, including all of the articles and advertisements contained in the original, was included with copies of the February 28, 1938 issue as a commemoration of the magazine's 15th anniversary.[8] The cover price was 15¢ (equivalent to $2.08 today) On Hadden's death in 1929, Luce became the dominant man at Time and a major figure in the history of 20th-century media. According to Time Inc.: The Intimate History of a Publishing Enterprise 1972–2004 by Robert Elson, "Roy Edward Larsen [...] was to play a role second only to Luce's in the development of Time Inc". In his book, The March of Time, 1935–1951, Raymond Fielding also noted that Larsen was "originally circulation manager and then general manager of Time, later publisher of Life, for many years president of Time Inc., and in the long history of the corporation the most influential and important figure after Luce".[citation needed]

Around the time they were raising $100,000 from wealthy Yale alumni like Henry P. Davison, partner of J.P. Morgan & Co., publicity man Martin Egan and J.P. Morgan & Co. banker Dwight Morrow, Henry Luce, and Briton Hadden hired Larsen in 1922 – although Larsen was a Harvard graduate and Luce and Hadden were Yale graduates. After Hadden died in 1929, Larsen purchased 550 shares of Time Inc., using money he obtained from selling RKO stock which he had inherited from his father, who was the head of the Benjamin Franklin Keith theatre chain in New England. However, after Briton Hadden's death, the largest Time stockholder was Henry Luce, who ruled the media conglomerate in an autocratic fashion, "at his right hand was Larsen", Time's second-largest stockholder, according to Time Inc.: The Intimate History of a Publishing Enterprise 1923–1941. In 1929, Roy Larsen was also named a Time Inc. director and vice-president. J. P. Morgan retained a certain control through two directorates and a share of stocks, both over Time and Fortune. Other shareholders were Brown Brothers W. A. Harriman & Co., and The New York Trust Company (Standard Oil).[citation needed]

By the time Henry Luce died in 1967, the Time Inc. stock which Luce owned was worth about $109 million and yielded him a yearly dividend income of more than $2.4 million, according to Curtis Prendergast's The World of Time Inc: The Intimate History of a Changing Enterprise 1957–1983. The value of the Larsen family's Time stock was now worth about $80 million during the 1960s and Roy Larsen was both a Time Inc. director and the chairman of its Executive Committee, before serving as Time's vice-chairman of the board until the middle of 1979. According to the September 10, 1979 issue of The New York Times, "Mr. Larsen was the only employee in the company's history given an exemption from its policy of mandatory retirement at age 65".[citation needed]

After Time magazine began publishing its weekly issues in March 1923, Roy Larsen was able to increase its circulation by utilizing U.S. radio and movie theaters around the world. It often promoted both Time magazine and U.S. political and corporate interests. According to The March of Time, as early as 1924, Larsen had brought Time into the infant radio business with the broadcast of a 15-minute sustaining quiz show entitled Pop Question which survived until 1925". Then, in 1928, Larsen "undertook the weekly broadcast of a 10-minute programme series of brief news summaries, drawn from current issues of Time magazine [...] which was originally broadcast over 33 stations throughout the United States".[citation needed]

Larsen next arranged for a 30-minute radio program, The March of Time, to be broadcast over CBS, beginning on March 6, 1931. Each week, the program presented a dramatisation of the week's news for its listeners, thus Time magazine itself was brought "to the attention of millions previously unaware of its existence", according to Time Inc.: The Intimate History of a Publishing Enterprise 1923–1941, leading to an increased circulation of the magazine during the 1930s. Between 1931 and 1937, Larsen's The March of Time radio program was broadcast over CBS radio and between 1937 and 1945 it was broadcast over NBC radio – except for the 1939 to 1941 period when it was not aired. People Magazine was based on Time's People page.

In 1989, when Time, Inc. and Warner Communications merged, Time became part of Time Warner, along with Warner Bros. .

In 1988, Jason McManus succeeded Henry Grunwald as Editor-in-Chief and oversaw the transition before Norman Pearlstine succeeded him in 1995.

In 2000, Time magazine became part of AOL Time Warner, which reverted to the name Time Warner in 2003.

In 2007, Time moved from a Monday subscription/newsstand delivery to a schedule where the magazine goes on sale Fridays, and is delivered to subscribers on Saturday. The magazine actually began in 1923 with Friday publication.

During early 2007, the year's first issue was delayed for roughly a week due to "editorial changes", including the layoff of 49 employees.[9]

In 2009 Time announced that they were introducing a personalized print magazine, Mine, mixing content from a range of Time Warner publications based on the reader's preferences. The new magazine met with a poor reception, with criticism that its focus was too broad to be truly personal.[10]

The magazine has an online archive with the unformatted text for every article published. The articles are indexed and were converted from scanned images using optical character recognition technology. There are still minor errors in the text that are remnants of the conversion into digital format.

Time Inc. and Apple have come to an agreement wherein U.S. subscribers to Time will be able to read the iPad versions for free, at least until the two companies sort out a viable digital subscription model.[11]

In January 2013, Time Inc. announced that it would cut nearly 500 jobs – roughly 6% of its 8,000 staff worldwide.[12] Although Time magazine has maintained high sales, its ad pages have declined significantly over time.[13]

During the second half of 2009 the magazine saw a 34.9% decline in newsstand sales.[15] During the first half of 2010, there was another decline of at least one-third in Time magazine sales. In the second half of 2010, Time magazine newsstand sales declined by about 12% to just over 79,000 copies per week.[citation needed] As of 2012, it has a circulation of 3.3 million, making it the eleventh most circulated magazine in the United States, and the second most circulated weekly behind People.[3] As of 2014, its circulation was 3,286,467[1]

Time initially possessed a distinctive writing style, making regular use of inverted sentences. This was parodied in 1936 by Wolcott Gibbs in The New Yorker: "Backward ran sentences until reeled the mind [...] Where it all will end, knows God!"[16]

Time is also known for its signature red border, first introduced in 1927. The iconic red border was homaged or satirized by Seattle's The Stranger newspaper in 2010.[18]

The border has only been changed four times since 1927: The issue released shortly after the September 11 attacks on the United States featured a black border to symbolize mourning. However, this edition was a special "extra" edition published quickly for the breaking news of the event; the next regularly scheduled issue contained the red border. Additionally, the April 28, 2008 Earth Day issue, dedicated to environmental issues, contained a green border.[19] The next change in border was in the September 19, 2011 issue, commemorating the 10th anniversary of September 11 attacks with a metallic silver border. The most recent change (again with a silver border) was in the December 31, 2012 issue, noting Barack Obama's selection as Person of the Year.

In 2007, Time engineered a style overhaul of the magazine. Among other changes, the magazine reduced the red cover border in order to promote featured stories, enlarged column titles, reduced the number of featured stories, increased white space around articles, and accompanied opinion pieces with photographs of the writers. The changes have met both criticism and praise.[20][21][22]

Not one of the top 9 contenders from the readers' poll was chosen and 4 out of 8 finalists chosen by Time's editors appeared near the bottom of the readers' poll.[25] Vladimir Putin was also included in the top 8 finalists despite having already won person of the year in 2007.[25] One of the candidates on the shortlist came with strong controversy, Abu Bakr al-Baghdadi. Baghdadi is the leader of ISIS, the organization behind the Paris Attacks.[27]

Person of the Year

Time's most famous feature throughout its history has been the annual "Person of the Year" (formerly "Man of the Year") cover story, in which Time recognizes the individual or group of individuals who have had the biggest impact on news headlines over the past 12 months. The distinction is supposed to go to the person who, for good or ill, has most affected the course of the year; it is therefore not necessarily an honor or a reward. In the past, such figures as Adolf Hitler and Joseph Stalin have been Man of the Year.

In 2006, the Person of the Year was designated as "You", a move that was met with split reviews. Some thought the concept was creative; others wanted an actual person of the year. Editors Pepper and Timmer reflected that, if it had been a mistake, "we're only going to make it once".[28]

In recent years Time has assembled an annual list of the 100 most influential people of the year. Originally, they had made a list of the 100 most influential people of the 20th century. These issues usually have the front cover filled with pictures of people from the list and devote a substantial amount of space within the magazine to the 100 articles about each person on the list. There have, in some cases, been over 100 people, when two people have made the list together, sharing one spot.

Time for Kids is a division magazine of Time that is especially published for children and is mainly distributed in classrooms. TFK contains some national news, a "Cartoon of the Week", and a variety of articles concerning popular culture. An annual issue concerning the environment is distributed near the end of the U.S. school term. The publication rarely exceeds ten pages front and back. It is used in many libraries.[how?]

Time LightBox is a photography blog created and curated by Time's photo department, that was launched in 2011.[35] In 2011 Life picked LightBox for its Photo Blog Awards.[36]