Fingallian or the Fingal dialect is an extinct variety of English formerly spoken in Fingal, Ireland. It is thought to have been an offshoot of Middle English, which was brought to Ireland during the Norman invasion, and was extinct by the mid-19th century. Although little is known of Fingallian, it is thought to have been similar to the Forth and Bargy dialect of County Wexford.[1] The surviving literature of Fingallian consists of two satirical or humorous poems, the short "Fingallian Dance" and the much longer Purgatorium Hibernicum. Both poems are anonymous and are thought to be humorous parodies of Fingallian by non-native speakers, so their value from a linguistic point of view may be limited.

Fingallian was spoken in the region of Fingal, traditionally the part of County Dublin north of the River Tolka, and now a separate county. It was spoken in the area near the northern border. The name "Fingal" is from the Irish Fine Gall, or "territory of foreigners", probably a reference to a Norse settlement in the area. Linguist Alf Sommerfelt proposed the idea of a Norse influence on the Fingallian dialect, though later scholars have found no evidence of such a connection.[2]

Like the Forth and Bargy dialect of County Wexford, Fingallian is thought to have derived from Middle English, which was introduced by "Old English" settlers after the Norman invasion of Ireland in 1169. Middle English was well established in southeastern Ireland until the 14th century, when the area was re-Gaelicized and English was displaced. As such, the Yola and Fingal dialects would have been the only attested relicts of this original English variety in Ireland.[3]

The poem most likely to have been composed by a native speaker of Fingallian is "The Fingallian Dance", a brief, three-verse poem written between about 1650 and 1660.[4] It is mildly indecent poem about a man going to see dancers at a bullring (bull fighting was practised in 17th century Ireland). Although the poem is likely to have been standardised when written down, it gives a flavour of Fingallian, particularly forms like fat for "what" or fen for "when". Other words that need explanation are ame 'them' and plack-keet, 'part of a petticoat'.[5]

The Fingallian Dance c.1650
-
On a day in the Spring,
As I went to bolring
to view the jolly Daunciers,
They did trip it so high
(Be me shole!) I did spee
six C_____ abateing Seav'n hairs
-
But wondering on 'ame,
Fat make 'em so tame,
Fen de catch at their plack-keet,
The maids of y-yore
Wou'd y-cree, and y-rore,
And make o foul rackeet.
-
But fire take 'ame,
They made me ashame,
and when I went home to me weef
And told her the chaunce
Of the Maids in the Daunce,
'Peace thy prateing', say'd shee, 'for dee Leef!'

The Purgatoriam Hibernicum is a humorous and bawdy burlesque or travesty on the Roman poet Virgil's Aeneid. It exists in three versions: the original manuscript (Purgatoriam Hibernicum), another manuscript entitled The Fingallian Travesty: the Sixt Book of Virgill's Aenoeids a la mode de Fingaule (1670–5), and a printed version called The Irish Hudibras or The Fingallian Burlesque (1689).[4][6]

Virgil's prince Aeneas and his noble lover Dido are transformed into a bumbling young Fingallian called 'Prince' Nees and a coarse ex-nun Dydy. The names of all the characters are converted into mock 'Irish' forms and the places mentioned in Virgil's text become places in Fingal. Part of the humour for the Anglo-Irish readers of the poem is that Nees and Dydy converse with each other in broad Fingallian. Although the intention is supposedly to mock their speech, it is rendered with such vitality and wit that the effect is actually to give the reader an appreciation of its richness.

The short extract below provides a good example of Fingallian. In it Nees encounters Dydy again and seeing her look pale and unwell realises that he may have been responsible for giving her the 'flame' or venereal disease. A few features need explanation: 'V' is used instead of 'W' in Fingallian; 'suggam' is a kind of straw rope'; Ful dea ro is derives from Irish fuil Dé, a rogha 'God's blood, my sweetheart':

'Sure, Sure!' sayes Nees, 'dis me old vench is!'
But when he drew more neare her quarters,
And know her by her suggam garters,
'Ful dea, ro, dou unlucky jade,
I'll chance upon dee! Art thou dead?
Fat devill vas be in dee, vench?
Vas he soe hot is cou'd no quench
De flame?' Indeed, oh no! but Nees chief
Occasion is of all dis mischeif'.

Nees continues with an attempt to sweet talk Dydys and asks her for a 'pogue', but his fears are justified and Dydy is having none of it. She tells him that if he think he can have another 'bout' with her, he can think again – after he has play'd the vagge (been a wag) with her and given her the bagge (rejected her) she will vatch de vales ('watch the walls', be on guard) and foil his plan:

'I, Nees', sayes she in mighty snuffe,
'and be! is tink is varm enough,
If dou cam shance but to find out
Dee old consort to have a bout –
and den, fen dou has play'd de vagge,
to give me, as before, de bagge!
Butt I will vatch de vales, Nees,
And putt foile on dee by dis chees,'

Then Dydy goes on her way in high dudgeon.

In John Dunton's Letters from Ireland (1698) he writes that in Fingal "they have a sort of jargon speech peculiar to themselves, and understand not one word of Irish, and are as little understood by the English". Dunton gives a sample of the language; a lamentation that a mother made over the grave of her son, who was a keen fisher and hunter. Note that a roon and moorneeng are from the Irish a rúin "(secret) love" (vocative) and múirnín "love" (lit. "little trust"): 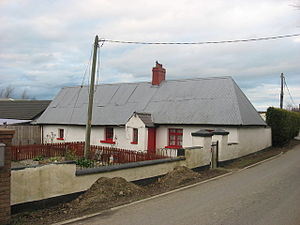 Traditional cottage, Knocknagin, Fingal. The cottage would have been originally thatched

Although Fingallian is no longer spoken, a large number of dialect words unique to Fingal have survived, especially in traditional Fingal towns and villages such as Swords (now a very large suburb of Dublin), Skerries, Rush, Lusk, Donabate, Garristown, Oldtown, Balrothery, and Naul. Major sources for these include glossaries in an article in the folklore Journal Béaloideas by J. J. Hogan and Patrick O'Neill and a book on Fingal lore entitled Fair Fingall by Patrick Archer.

Examples from Archer's Glossary include:

Examples from Hogan and O'Neill's Glossary include: