The first inauguration of Theodore Roosevelt as the 26th President of the United States, took place on September 14, 1901 upon the assassination of President William McKinley, in Buffalo, New York.

John R. Hazel, U.S. District Judge for the Western District of New York, administered the Oath of office. While often referred to as an inauguration, this is more properly referred to as a swearing in ceremony, following the assassination of President McKinley.[1]

At the Pan-American Exposition in Buffalo, New York, on September 6, 1901, President McKinley was shot by Leon Czolgosz. Vice President Roosevelt had been at a luncheon of the Vermont Fish and Game League on Lake Champlain when he learned the news. He rushed to Buffalo, but after being assured the President would recover, he went on a planned family camping and hiking trip to Mount Marcy in the Adirondacks. In the mountains, a runner notified him McKinley was on his death bed. Roosevelt pondered with his wife, Edith, how best to respond, not wanting to show up in Buffalo and wait on McKinley's death. Roosevelt was rushed by a series of stagecoaches to North Creek train station. At the station, Roosevelt was handed a telegram that said President McKinley died at 2:30 AM that morning. The new President continued by train from North Creek to Buffalo. He arrived in Buffalo later that day, accepting an invitation to stay at the home of Ansley Wilcox, a prominent lawyer and friend since the early 1880s when they had both worked closely with New York Governor Grover Cleveland on civil service reform. 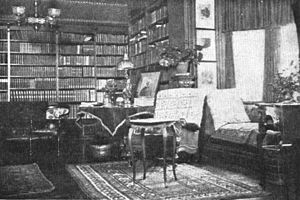 Interior of room in Wilcox House where Theodore Roosevelt took the presidential oath of office.

It was decided to conduct the inauguration immediately due to the tragic and politically charged circumstances of President McKinley's death. The most appropriate site was determined to the Ansley Wilcox House. Approximately 50 dignitaries, family members and cabinet officials gathered in the front library for the inauguration. Federal Judge John R. Hazel prepared to administer the oath.

Borrowing Wilcox's morning coat, President Roosevelt did not swear on a Bible,[2] in contrast to the usual tradition of US presidents.[3] There were also no photographs, as inauguration photos were not allowed after a rival photographer unceremoniously knocked down another's camera, although the room was heavily photographed after the inauguration had concluded.

Expressing the fears of many old-line Republicans, Mark Hanna lamented "that damned cowboy is president now."[4]