From Infogalactic: the planetary knowledge core
Jump to: navigation, search
For other uses, see Furniture (disambiguation). 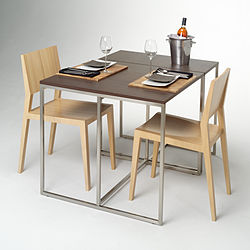 A dining table with two chairs

Furniture is the mass noun for the movable objects intended to support various human activities such as seating (e.g., chairs, stools and sofas) and sleeping (e.g., beds). Furniture is also used to hold objects at a convenient height for work (as horizontal surfaces above the ground, such as tables and desks), or to store things (e.g., cupboards and shelves). Furniture can be a product of design and is considered a form of decorative art. In addition to furniture's functional role, it can serve a symbolic or religious purpose. It can be made from many materials, including metal, plastic, and wood. Furniture can be made using a variety of woodworking joints which often reflect the local culture.

Archeological research shows that Neolithic people used stone to build cupboards, dressers, beds, shelves and seats. Ancient furniture from the 8th-century BC includes tables and serving stands. The furniture of the Middle Ages was usually heavy, oak, and ornamented. Furniture design expanded during the Italian Renaissance of the fourteenth and fifteenth century. The seventeenth century, in both Southern and Northern Europe, was characterized by opulent, often gilded Baroque designs. The nineteenth century is usually defined by revival styles. The first three-quarters of the twentieth century are often seen as the march towards Modernism. One unique outgrowth of post-modern furniture design is a return to natural shapes and textures.[1]

Furniture has been a part of the human experience since the development of non-nomadic cultures. Evidence of furniture survives from the Neolithic Period and later in antiquity in the form of paintings, such as the wall Murals discovered at Pompeii; sculpture, and examples have been excavated in Egypt and found in tombs in Ghiordes, in modern-day Turkey. 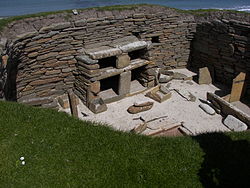 A range of unique stone furniture has been excavated in Skara Brae, a Neolithic village located in Orkney. The site dates from 3100–2500 BC and due to a shortage of wood in Orkney, the people of Skara Brae were forced to build with stone, a readily available material that could be worked easily and turned into items for use within the household. Each house shows a high degree of sophistication and was equipped with an extensive assortment of stone furniture, ranging from cupboards, dressers and beds to shelves, stone seats, and limpet tanks. The stone dresser was regarded as the most important as it symbolically faces the entrance in each house and is therefore the first item seen when entering, perhaps displaying symbolic objects, including decorative artwork such as several Neolithic Carved Stone Balls also found at the site.

Ancient furniture has been excavated from the 8th-century BC Phrygian tumulus, the Midas Mound, in Gordion, Turkey. Pieces found here include tables and inlaid serving stands. There are also surviving works from the 9th-8th-century BC Assyrian palace of Nimrud. The earliest surviving carpet, the Pazyryk Carpet was discovered in a frozen tomb in Siberia and has been dated between the 6th and 3rd century BC. Recovered Ancient Egyptian furniture includes 3rd millennium BC beds discovered at Tarkhan as place for the deceased, a c. 2550 BC gilded bed and two chairs from the tomb of Queen Hetepheres I, and many examples (boxes, beds, chairs) from c. 1550 to 1200 BC from Thebes. Ancient Greek furniture design beginning in the 2nd millennium BC, including beds and the klismos chair, is preserved not only by extant works, but by images on Greek vases. The 1738 and 1748 excavations of Herculaneum and Pompeii revealed Roman furniture, preserved in the ashes of the 79 A.D. eruption of Vesuvius, to the eighteenth century. 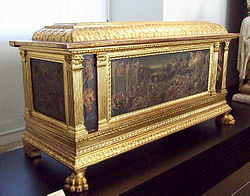 Florentine cassone from the 15th century

The furniture of the Middle Ages was usually heavy, oak, and ornamented with carved designs. Along with the other arts, the Italian Renaissance of the fourteenth and fifteenth century marked a rebirth in design, often inspired by the Greco-Roman tradition. A similar explosion of design, and renaissance of culture in general, occurred in Northern Europe, starting in the fifteenth century. The seventeenth century, in both Southern and Northern Europe, was characterized by opulent, often gilded Baroque designs that frequently incorporated a profusion of vegetal and scrolling ornament. Starting in the eighteenth century, furniture designs began to develop more rapidly. Although there were some styles that belonged primarily to one nation, such as Palladianism in Great Britain or Louis Quinze in French furniture, others, such as the Rococo and Neoclassicism were perpetuated throughout Western Europe.

The nineteenth century is usually defined by concurrent revival styles, including Gothic, Neoclassicism, Rococo, and the EastHaven Movement. The design reforms of the late century introduced the Aesthetic movement and the Arts and Crafts movement. Art Nouveau was influenced by both of these movements.

This design was in many ways rooted in necessity and emphasizes both form and materials. Early American[vague]chairs and tables are often constructed with turned spindles and chair backs often constructed with steaming to bend the wood. Wood choices tend to be deciduous hardwoods with a particular emphasis on the wood of edible or fruit bearing trees such as Cherry or Walnut.[citation needed] 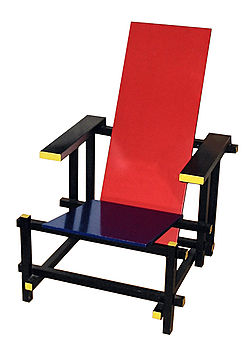 The first three-quarters of the twentieth century are often seen as the march towards Modernism. Art Deco, De Stijl, Bauhaus, Wiener Werkstätte, and Vienna Secession designers all worked to some degree within the Modernist idiom. Born from the Bauhaus and Art Deco/Streamline styles came the post WWII "Mid-Century Modern" style using materials developed during the war including laminated plywood, plastics and fiberglass. Prime examples include furniture designed by George Nelson Associates, Charles and Ray Eames, Paul McCobb, Florence Knoll, Harry Bertoia, Eero Saarinen, Harvey Probber, Vladamir Kagan and Danish modern designers including Finn Juhl and Arne Jacobsen. Postmodern design, intersecting the Pop art movement, gained steam in the 1960s and 70s, promoted in the 80s by groups such as the Italy-based Memphis movement. Transitional furniture is intended to fill a place between Traditional and Modern tastes. 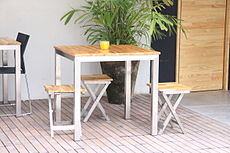 Great efforts from individuals, governments, and companies has led to the manufacturing of products with higher sustainability known as Ecodesign. This new line of furniture is based on environmentally friendly design. Its use and popularity are increasing each year.[2]

One unique outgrowth of post-modern furniture design is Live edge, heralding a return to natural shapes and textures within the home.[3]

File:Sendai Tansu.jpg
Sendai-dansu for kimono, zelkova wood, note the elaborate ironwork, handles on side for transportation, and lockable compartment

Asian furniture has a quite distinct history. The traditions out of India, China, Pakistan, Indonesia (Bali and Java) and Japan are some of the best known, but places such as Korea, Mongolia, and the countries of South East Asia have unique facets of their own.

The use of uncarved wood and bamboo and the use of heavy lacquers are well known Chinese styles. It is worth noting that Chinese furniture varies dramatically from one dynasty to the next.

Traditional Japanese furniture is well known for its minimalist style, extensive use of wood, high-quality craftsmanship and reliance on wood grain instead of painting or thick lacquer. Japanese chests are known as Tansu, known for elaborate decorative iron work, and are some of the most sought-after of Japanese antiques. The antiques available generally date back to the Tokugawa era and Meiji era.

Types of wood to make furniture

All different type of woods have unique signature marks, that can help in easy identification of the type. There are hardwoods and softwoods. Both are used in furniture manufacturing, and each have their own specific uses.[4] Most commonly, quality furniture is made out of hardwood which is made from oak, maple, mahogany, teak, walnut, cherry and birch. High quality wood will have been air dried to rid it of its moisture.[5]

Standards for design, functionality and safety