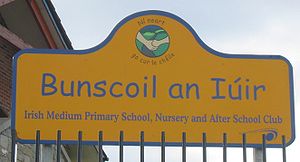 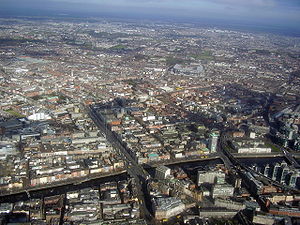 Students in the Gaelscoileanna acquire the Irish language through language immersion, and study the standard curriculum through it. Gaelscoileanna, unlike English-medium schools, have the reputation of producing competent Irish speakers.[2] English-medium schools, in contrast, produce relatively few fluent Irish speakers, despite the Irish language being an obligatory subject in the Republic of Ireland in both primary and secondary school. This has been attributed in part to the lack of Irish-language immersion programs.[3] The present government has promised reforms in curriculum and teaching training for Irish in English-medium schools.[4]

Their success is due to effective (though limited) community support and an efficient administrative infrastructure. They are distinguished by being the product, not of state policy, but of a genuine community movement.

Gaelscoileanna have undergone a striking expansion over the last few decades, though there are now concerns that recent rules limiting the founding of new schools may affect Irish-medium education, especially when the demand is greater than the supply.[5]

In 1972 there were only 11 such schools at primary level and five at secondary level in the Republic.[citation needed] In the 2012-2013 school year there were 177 gaelscoileanna at primary level, attended by 35,710 students, and 40 gaelcholáistí at secondary level, attended by 9,663 students in non-Gaeltacht areas across Ireland.[6] 36 of these primary schools operated in Northern Ireland, while 1 of the postprimary schools and 4 of the postprimary units operated in Northern Ireland.[6] Additionally, some 4,000 children attend Irish-medium preschools.[citation needed] There is now at least one gaelscoil in each of the 32 counties of Ireland and several in some larger towns and cities.[citation needed]

Gaelscoileanna have acquired a reputation for providing excellent academic results at a moderate cost. They have been described as a system of "positive social selection,” giving better than average access to tertiary education and the social and employment opportunities which follow. An analysis of "feeder" schools which send students on to tertiary level institutions shows that 22% of Irish-medium schools send all their students on to tertiary level, compared to 7% of English-medium schools.[7]

Supporters[who?] argue that the bilingualism resulting from early acquisition of another language is of general intellectual benefit and helps children to learn still other languages. Irish-language advocates of the immersion approach sometimes refer to studies showing that bilingual children have advantages over monoglot children in other subjects.[clarification needed][8]

The function and future of the Gaelscoileanna in the Republic of Ireland will be affected by the 20 Year Strategy for the Irish Language 2010–2030, published in November 2009. This emphasises the importance of offering all children in primary schools in Ireland the opportunity to experience partial immersion in the formative years of primary education. It calls for primary teachers to have additional immersion classes to improve their competence in the language. This would involve teaching some subjects such as Mathematics and Science in Irish.[12] Such a policy, if implemented effectively, would mean that the gaelscoileanna were no longer the only means of promoting bilingualism in schoolchildren.