Great Union Day (Romanian: Ziua Marii Uniri, also called Unification Day[1]) occurring on December 1, is the national holiday of Romania. It commemorates the assembly of the delegates of ethnic Romanians held in Alba Iulia, which declared the Union of Transylvania with Romania.

This holiday was set after the Romanian Revolution and it marks the unification of Transylvania, but also of the provinces of Bessarabia and Bukovina with the Romanian Kingdom, in 1918.

In Communist Romania, the date of the national holiday was set to August 23 to mark the 1944 overthrow of the pro-fascist government of Marshal Ion Antonescu. 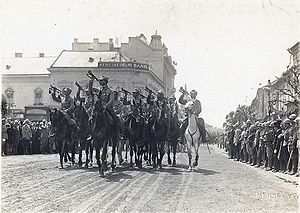 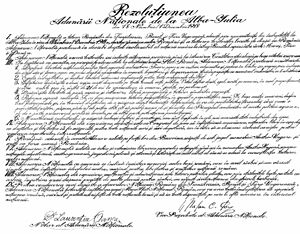 The Resolution of the National Assembly

On December 1, 1918 (November 18 Old Style), the National Assembly of Romanians of Transylvania and Hungary, consisting of 1,228 elected representatives of the Romanians in Transylvania, Banat, Crişana and Maramureş, convened in Alba Iulia and decreed (by unanimous vote)

The Resolution[2] voted by the National Assembly stipulated also the "fundamental principles for the foundation of the new Romanian State". It was conditional, and demanded the preservation of a democratic local autonomy, the equality of all nationalities and religions.

The Assembly also formed from 200 of its members, plus 50 co-opted members a High National Romanian Council of Transylvania, the new permanent parliament of Transylvania.

On December 11, 1918, King Ferdinand signed the Law[3] regarding the Union of Transylvania, Banat, Crişana, the Satmar and Maramureş with the Old Kingdom of Romania, decreeing that

Declaration of the holiday

The choice of December 1, though not explicitly declared in the law, referred to the unification of the provinces of Transylvania, Banat, Crişan, and Maramureş with Romania in 1918. The choice of this day as a national holiday was seen as an affront to the Hungarian minority of Romania, which signified for them a loss in political power.[5]

The first December 1 national holiday saw the largest celebrations in Alba Iulia, the location in which the union of Transylvania with Romania was signed. They were marked by significant political polarization: Corneliu Coposu, then the leader of the anticommunist opposition, was interrupted several times during a speech by boos from the crowd.[6] Petre Roman, then the prime minister, showed such pleasure at these repeated interruptions that Ion Iliescu had to gesture to him to stop. This signal was captured on filmed and spread widely by the mass media. 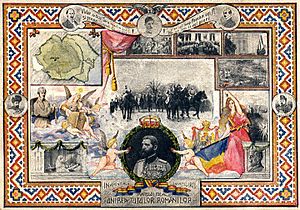 Romanian postcard issued cca. 1918-1919. Note the unusual shape of Romania's western borders as pictured on the map (the country is supposed to include all of Maramureş, a bigger part of Crişana, and possibly the entire Banat - pictured in white) — the definitive borders would not be drawn until 1920.