Greek scholars in the Renaissance 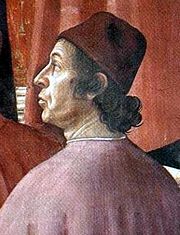 Demetrius Chalcondyles (brother of Laonikos Chalkokondyles) (1424–1511) was a Greek Renaissance scholar,[1] Humanist and teacher of Greek and Platonic philosophy.[2] 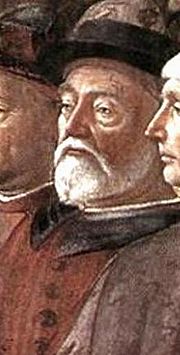 John Argyropoulos (1415–1487) was a Greek Renaissance scholar who played a prominent role in the revival of Greek philosophy in Italy.[3]

The migration waves of Byzantine scholars and émigrés in the period following the Crusader sacking of Constantinople and the end of the Byzantine Empire in 1453, is considered by many scholars key to the revival of Greek and Roman studies that led to the development of the Renaissance humanism[4] and science. These emigres were grammarians, humanists, poets, writers, printers, lecturers, musicians, astronomers, architects, academics, artists, scribes, philosophers, scientists, politicians and theologians.[5] They brought to Western Europe the far greater preserved and accumulated knowledge of their own (Greek) civilization.

Their main role within the Renaissance humanism was the teaching of the Greek language to their western counterparts in universities or privately together with the spread of ancient texts. Their forerunners were Barlaam of Calabria (Bernardo Massari) and Leonzio Pilato, both drawn from culturally Byzantine Calabria in southern Italy. The impact of these two scholars on the very first Renaissance humanists was indisputable.[6]

Collegio Pontifico Greco was a foundation of Gregory XIII, who established a college in Rome to receive young Greeks belonging to any nation in which the Greek Rite was used, and consequently for Greek refugees in Italy as well as the Ruthenians and Malchites of Egypt and Syria. These young men had to study the sacred sciences, in order to spread later sacred and profane learning among their fellow-countrymen and facilitate the reunion of the schismatical churches. The construction of the College and Church of S. Atanasio, joined by a bridge over the Via dei Greci, was begun at once. The same year (1577) the first students arrived, and until the completion of the college were housed elsewhere.[7]

Besides the southern Italians who inhabited ex-Byzantine territories of the peninsula and Sicily which were still closely connected with the Byzantine culture (and still Greek speaking in many areas), by 1500 there was a Greek speaking community of about 5,000 in Venice. The Venetians also ruled Crete, Dalmatia, and scattered islands and port cities of the former empire the populations of which were augmented by refugees from other Byzantine provinces who preferred Venetian to Ottoman governance. Crete was especially notable for the Cretan School of icon-painting, which after 1453 became the most important in the Greek world.[8]

Contribution of Greek scholars to the Italian Renaissance 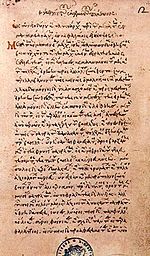 One of Georgius Gemistus (Plethon)'s manuscripts, in Greek, written in the early 15th century. 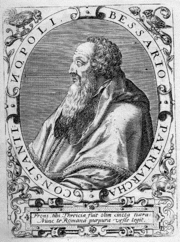 Cardinal Bessarion (1395–1472) of Trebizond, Pontus was a Greek scholar, statesman, and cardinal and one of the leading figures in the rise of the intellectual Renaissance.[9] 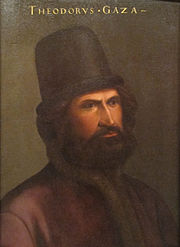 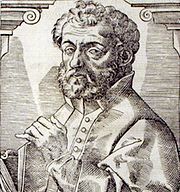 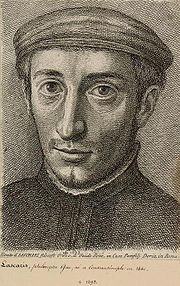 Although ideas from ancient Rome already enjoyed popularity with the scholars of the 14th century and their importance to the Renaissance was undeniable, the lessons of Greek learning brought by Byzantine intellectuals changed the course of humanism and the Renaissance itself.[citation needed] While Greek learning affected all the subjects of the studia humanitatis[citation needed], history and philosophy in particular were profoundly affected by the texts and ideas brought from Byzantium. History was changed by the re-discovery and spread of Greek historians’ writings, and this knowledge of Greek historical treatises helped the subject of history become a guide to virtuous living based on the study of past events and people. The effects of this renewed knowledge of Greek history can be seen in the writings of humanists on virtue, which was a popular topic. Specifically, these effects are shown in the examples provided from Greek antiquity that displayed virtue as well as vice. The philosophy of not only Aristotle but also Plato affected the Renaissance by causing debates over man’s place in the universe, the immortality of the soul, and the ability of man to improve himself through virtue. The flourishing of philosophical writings in the 15th century revealed the impact of Greek philosophy and science on the Renaissance. The resonance of these changes lasted through the centuries following the Renaissance not only in the writing of humanists, but also in the education and values of Europe and western society even to the present day.[10][11][12]

Deno Geanakopoulos in his work on the contribution of Byzantine scholars to Renaissance has summarised their input into three major shifts to Renaissance thought: 1) In early 14th century Florence from the early, central emphasis on rhetoric to one on metaphysical philosophy by means of introducing and reinterpretation of the Platonic texts, 2) In Venice-Padua by reducing the dominance of Averroist Aristotle in science and philosophy by supplementing but not completely replacing it with Byzantine traditions which utilised ancient and Byzantine commentators on Aristotle, 3) and earlier in the mid 15th century in Rome, through emphasis not on any philosophical school but through the production of more authentic and reliable versions of Greek texts relevant to all fields of humanism and science and with respect to the Greek fathers of the church. Hardly less important was their direct or indirect influence on exegesis of the New Testament itself through Bessarion's inspiration of Lorenzo Valla's biblical emendations of the Latin vulgate in the light of the Greek text.[13] 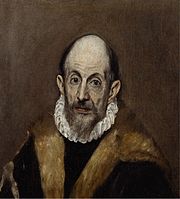 El Greco (literally 'the Greek') the nickname for the Cretan painter Dominikos Theotokopoulos.