Milos or Melos (/ˈmɛlɒsˌ -oʊsˌ ˈmiːlɒs, -loʊs/; Modern Greek: Μήλος [ˈmilos]; Ancient Greek: Μῆλος Melos) is a volcanic Greek island in the Aegean Sea, just north of the Sea of Crete. Milos is the southwesternmost island in the Cyclades group.

The island is famous for the statue of Aphrodite (the "Venus de Milo", now in the Louvre), and also for statues of the Greek god Asclepius (now in the British Museum[2]), the Poseidon and an archaic Apollo in Athens. Milos is a popular tourist destination during the summer. The Municipality of Milos also includes the uninhabited offshore islands of Antimilos and Akradies. The combined land area is 160.147 square kilometres (61.833 sq mi) and the 2011 census population was 4,977 inhabitants. 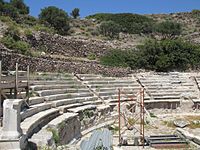 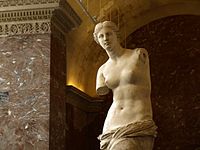 Obsidian from Milos was a commodity as early as 15,000 years ago.[3] Natural glass from Milos was transported over long distances and used for razor sharp "stone tools" well before farming began and later: "There is no early farming village in the Near East that doesn't get obsidian".[4] However the mining of obsidian did not lead to the development of permanent habitation or manufacturing on the island. Instead, those in search of obsidian arrived by boat, beaching it in a suitable cove and cutting pieces of the volcanic glass from the quarries.[5]

The position of Milos, between mainland Greece and Crete, and its possession of obsidian, made it an important centre of early Aegean civilisation. Milos lost its arms-making importance when bronze became the preferred material for the manufacture of weapons.[6]

The first settlement at Phylakopi (Greek Φυλακωπή) arose in the Bronze Age, flourishing as the extraction of obsidian was in the decline. The first settlers were tuna fishermen.[5] Lying on the north-east coast, excavations by the British School of Archeology revealed a town wall and a Minoan-inspired structure, dubbed the Pillar room, which contained fragments of vivid wall paintings. The famous fresco of the flying fish[7] was found in the ruins of the Pillar room and was executed with delicate colouring and graphic observation of nature in the graceful movement of a fish. Stylistic similarities to Minoan frescoes are suggested, and it could perhaps have been the work of a Cretan artist.[8] Part of the site has been washed away by the sea.

The antiquities found at the site covered three major periods, from the Early Cycladic period to the Mycenaean period Mycenaean age of Greece. At the site much pottery was excavated, with several changing styles and influences over the sites long occupation. In the early occupation of the site, there are many similarities and imports from other Cycladic islands and the settlement was very small. During the Middle Bronze Age however the site expanded significantly and the expansion of Minoan Crete saw an influx of Minoan pottery into the Cyclades, particularly at Akrotiri on Thera, though much found its way to Phylakopi. The quantities found at the Cycladic sites have been taken to suggest a Minoan control over the region, though it could also be the consumptive nature of the islanders adopting Cretan fashions. There is more than just pottery at Phylakopi however, the eruption of the Thera volcano saw a reduction in Minoan presence in the Cyclades and it is at this time that Mycenaean involvement on the islands increases. At Phylakopi (and unknown in the rest of the Cyclades) a Megaron structure, which is typically associated with the Mycenaean palaces, such as those at Tiryns, Pylos and Mycenae has been discovered. This has been taken to suggest that the Mycenaeans conquered the settlement and installed a seat of power for a governor. The evidence is not clear, though again it could be a legacy of the islanders adopting foreign elements into their culture. Particularly unexpected was the discovery in the 1970s of a shrine at the site, which contained many examples of Aegean figurines, including the famous "Lady of Phylakopi". The shrine is unprecedented in the Bronze Age Cyclades and has provided a valuable insight ito the beliefs and rituals of the inhabitants of Phylakopi. The site was eventually abandoned and was never reoccupied.

In historical times, the island was occupied by Dorians from Laconia. In the 6th century BC, it again produced a remarkable series of vases, of large size, with mythological subjects and orientalizing ornamentation, and also a series of terra-cotta reliefs (Melian Reliefs). 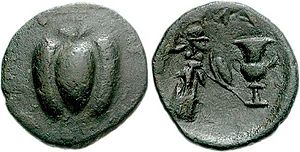 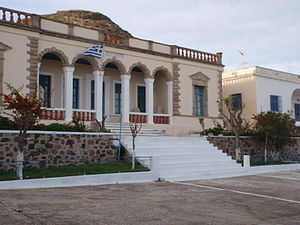 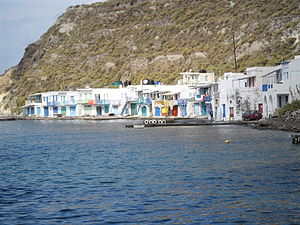 The Greek historian Thucydides wrote in his History of the Peloponnesian War of how, in 416 BC, Athens attacked Milos for refusing to submit tribute and refusing to join Athens' alliance against Sparta. The invasion of Melos occurred during the second phase of the Peloponnesian War (431 to 404 BC). The Melians claimed Spartan descent but had remained neutral throughout this conflict.[6] In 426 BC, Athens had prosecuted a brief perfunctory operation on the island but had withdrawn quickly because they were at the time involved in open conflict with Sparta. In 425 BC Athens claimed suzerainty over Milos and had demanded tribute.[9]

The second attack on Milos occurred five years after Athens and Sparta had signed a peace agreement and some historians like Bosworth believe that Athens' campaign against Milos in 416 BC was motivated by imperial expansion.[9] In the summer of 416 BC the Athenians landed an army of over 3,000 soldiers on the island, led by the generals Cleomedes and Tisias. They sent diplomats to negotiate a surrender, offering to spare the Melians if they joined the Athenian-dominated Delian League and paid tribute to Athens. The Melians rejected the ultimatum. The Athenians laid siege to the city and withdrew most of their troops from the island to fight elsewhere. For months the Melians withstood the siege, but with reinforcements from Athens and the help of traitors within Milos, the Athenians took the city that winter. The Athenians executed all the adult men they caught, and sold the women and children into slavery. They then settled 500 of their own colonists on the island.[10]

The next year, the Athenian tragedian Euripides wrote Trojan Women, which explored the hardships of conquest on women, set in the legendary past of the Trojan War. In 405 BC, with Athens losing the war, the Spartan general Lysander expelled the Athenian settlers from Melos and restored the survivors of the original Spartan colony to the island.[11] 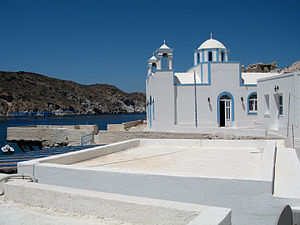 A church in Milos. During the Frankish period the island formed part of the Duchy of Naxos, except for the few years (1341–1383) when it was a separate lordship under Marco Sanudo and his daughter.

In 1566 the Venetians handed over the island to the Ottoman Turks, who were to rule it until 1830, when it was incorporated into the newly formed Greek state. 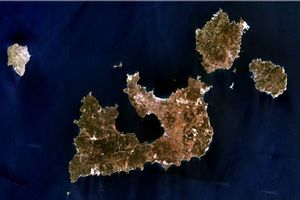 Milos is the southwesternmost island in the Cyclades, 120 kilometres (75 miles) due east from the coast of Laconia. From east to west it measures about 23 km (14 mi), from north to south 13 km (8.1 mi), and its area is estimated at 151 square kilometres (58 sq mi). The greater portion is rugged and hilly, culminating in Mount Profitis Elias 748 metres (2,454 feet) in the west. Like the rest of the cluster, the island is of volcanic origin, with tuff, trachyte and obsidian among its ordinary rocks. The natural harbour is the hollow of the principal crater, which, with a depth diminishing from 70 to 30 fathoms (130–55 m), strikes in from the northwest so as to separate the island into two fairly equal portions (see photo), with an isthmus not more than 18 km (11 mi) broad. In one of the caves on the south coast, the heat from the volcano is still great, and on the eastern shore of the harbour, there are hot sulfurous springs.

Antimelos or Antimilos, 13 miles (21 km) north-west of Milos, is an uninhabited mass of trachyte, often called Erimomilos (Desert Milos). Kimolos, or Argentiera, 1.6 km (0.99 mi) to the north-east, was famous in antiquity for its figs and fuller's earth, and contained a considerable city, the remains of which cover the cliff of St. Andrew's. Polyaigos (also called Polinos, Polybos or Polivo — alternative spelling Polyaegos) lies 2 km (1 mi) south-east of Kimolos. It was the subject of dispute between the Milians and Kimolians. It is now uninhabited.

The harbour town is Adamantas; from this there is an ascent to the plateau above the harbour, on which are situated Plaka, the chief town, and Kastro, rising on a hill above it, and other villages. The ancient town of Milos was nearer to the entrance of the harbour than Adamas, and occupied the slope between the village of Trypiti and the landing-place at Klima. Here is a theatre of Roman date and some remains of town walls and other buildings, one with a fine mosaic excavated by the British school at Athens in 1896. Numerous fine works of art have been found on this site, notably the Aphrodite in Paris, the Asclepius in London, and the Poseidon and the archaic Apollo in Athens. Other villages include Triovasalos, Peran Triovasalos, Pollonia and Zefyria (Kampos).

View of a mine 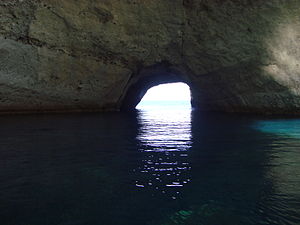 The Cave of Sikia from interior. 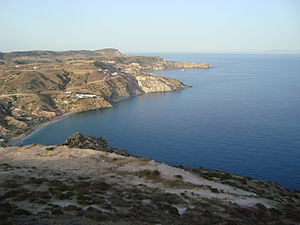 Southeast Milos showing the beaches of Agia Kyriaki and Paliochori in August 2014. 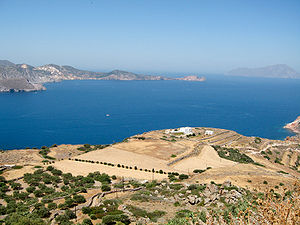 The bay of Milos

Bentonite, perlite, pozzolana and small quantities of kaolin are actively collected via strip mine or open-pit mine techniques in Milos and sold all over the world. In the past, baryte, sulfur, millstones and gypsum were also mined; in fact, Pliny notes that Milos was the most abundant source of sulfur in the ancient world.[14] In ancient times the alum of Milos was reckoned next to that of Egypt (Pliny xxxv. 15 [52]). The Melian earth was employed as a pigment by ancient artists. Milos was a source of obsidian during the Neolithic ages for the Aegean and Mediterranean. Orange, olive, cypress, tamarisk, juniper (Juniperus oxycedrus) and arbutus trees grow throughout the island, which, however, is too dry to have any profusion of vegetation. Vines, cotton and barley are the main crops. 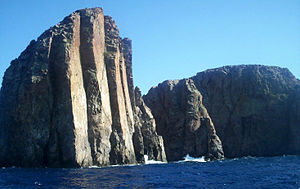 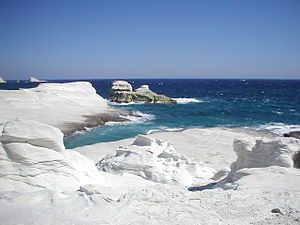 The steep beach of Tsigrado