Hoylake is a seaside town within the Metropolitan Borough of Wirral, Merseyside, England. The town is located at the north western corner of the Wirral Peninsula, near to the town of West Kirby and where the River Dee estuary meets the Irish Sea. The Peninsula was part of the historic county of Cheshire, at the time of the Domesday it was within the Hundred of Wilaveston.

In 1690, William III set sail from Hoylake, then known as Hyle or High-lake,[4][nb 1] with a 10,000-strong army to Ireland, where his army was to take part in the Battle of the Boyne. The location of departure remains known as King's Gap.[6] The previous year a large force under Marshal Schomberg had also departed from Hoylake on 12 August,[7] crossing to Ireland to capture Carrickfergus.

The present day township grew up in the 19th century around the small fishing village of Hoose.[8] The name Hoylake was derived from Hoyle Lake, a channel of water between Hilbre Island and Dove Point.[9] Protected by a wide sandbank known as Hoyle Bank and with a water depth of about 20 feet, it provided a safe anchorage for ships too large to sail up the Dee to Chester.[10] 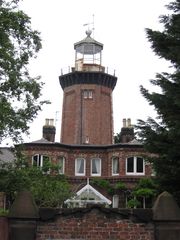 To facilitate safe access into the Hoylake anchorage, two lighthouses were constructed in 1763.[11] The lower light was a wooden structure that could be moved according to differing tides and shifting sands to remain aligned to the upper light, which was a permanent brick building. Both of these structures were rebuilt a century later.[12] The upper lighthouse, consisting of an octagonal brick tower, last shone on 14 May 1886 and is now part of a private residence in Valentia Road.[12] The lower lighthouse, closer to the shore in Alderley Road, was deactivated in 1908[13] and demolished in 1922.

The Royal Hotel was built by Sir John Stanley in 1792, with the intention of developing the area as a holiday resort. The numerous steam packet vessels sailing between Liverpool and North Wales which called at the hotel provided valuable patronage. By the mid-19th century a racecourse was laid out in the grounds of the hotel. The hotel building was demolished in the 1950s.[14]

Hoylake's lido, located on the promenade, was opened in June 1913 and rebuilt in the late 1920s. In 1976, the Hoylake Pool and Community Trust took over the running of the facility from Wirral Borough Council.[10] The baths finally closed in 1981.[15]

The Hoylake and West Kirby War Memorial is a notable local landmark, as it was designed in 1922 by the British sculptor Charles Sargeant Jagger who was responsible for a number of war memorials around the world, including the Royal Artillery Memorial at Hyde Park Corner in London.

Hoylake was governed by an urban district council until 1 April 1974 when it was absorbed into the newly created Metropolitan Borough of Wirral when local government reorganisation took place across the UK. At that point, Hoylake ceased to be in Cheshire, and became part of the nascent county of Merseyside.

Hoylake is a largely residential area and there is an active nightlife in the town centre, which is located at the original village of Hoose.[8]

The town supports a permanent lifeboat station, manned by the RNLI. Initially founded in 1803 by the Mersey Docks and Harbour Board, it is one of the oldest in the country.[17] In 2008, the RNLI began to raise £2 million for a new lifeboat station and new generation all-weather lifeboat, to facilitate a faster response time to emergencies and rescues in the Irish Sea and the rivers Dee and Mersey.The building was finally opened in 2009.

Hoylake includes the independent Kingsmead School, which educates girls and boys from 2 to 16 years old. Hoylake Holy Trinity C of E Primary School is the town's main primary school, educating children from the ages of 3 to 12.

Hoylake is the home of the Royal Liverpool Golf Club, built in 1869 on the site of the Royal Hotel racecourse.[8] It is the second oldest golf links in England, predated only by the Royal North Devon Golf Club, in Westward Ho!, Devon.[18] It has hosted many major tournaments such as the Open Championship and the Walker Cup. The club is often referred to as "Hoylake". It hosted the Open again in July 2006, after a gap of almost 40 years, with Tiger Woods earning the Claret Jug for the second year in a row. The 2014 Open Championship is the most recent of the event to be held at Hoylake. This was won by Rory McIlroy.

Hoylake-born amateur golfer John Ball Jnr. won the Open in 1890, becoming the first Englishman to do so. Another local amateur, Harold Hilton became Open champion two years later. He won again in 1897 at his home club of Royal Liverpool.

On the other side of Meols Drive and the railway is Hoylake Municipal Golf course which is used by Hoylake Golf Club (since 1933), West Hoyle GC and Irby GC. It was used as the 2006 Open Championship practice course.

Hoylake RFC rugby club was founded in 1922. They currently play in South Lancs/Cheshire Division One, the seventh tier of English rugby. Its predecessor, connected with the Royal Liverpool Golf Club, had been founded in the 1890s. British Open golf champion Harold Hilton was also captain of the rugby team for the 1890–91 season.[14]

Hoylake ASC was founded in 1931. The club now trains at the West Kirby Concourse and the Calday Grange Swimming Pool.

Hoylake Sailing Club was founded in 1887 and has a clubhouse and boatyard on North Parade. The club hosts an annual regatta and sends a team to the Southport 24 Hour Race.

Hoylake is one of the premier sites for sand yachting in Britain,[18] with banks around a quarter of a mile offshore. The town's beach was the venue for the European Sand Yacht Championships in 2007 and 2011.[19]

Cricket was played at the now disused Ellerman Lines Cricket Ground from as early as the 1920s, when the then newly formed West Wirral Cricket Club played at the ground. It was later sold to Ellerman Lines, who transformed the site into their social club. Cheshire played minor counties cricket there from 1957 to 1968. The ground also held Cheshire's first ever appearance in List A cricket against Surrey in the first round of the 1964 Gillette Cup.[20] The ground was later sold, with the site becoming a nightclub, before being demolished following a fire. The site of the ground has been selected for construction of 62 affordable homes.[21]

Cliff Williams (1949- ), bassist of AC/DC grew up in Hoylake, as well as becoming influenced by the local Merseybeat movement.

John Lennon's first wife Cynthia moved from Liverpool to Hoylake after their divorce in 1968. Cynthia had grown up in Hoylake as a child. Their son Julian (1963- ) spent much of his early life in Hoylake.[23]

In 1940, comedian Eric Morecambe won a local amateur talent contest, held at Hoylake's Kingsway Cinema. His prize was an audition before impresario Jack Hylton and subsequently where he first met his future comedy partner Ernie Wise.[24]

Mike Rutherford (1950- ) of Genesis was a boarder at the Leas School, formerly on Meols Drive.

Indie rock bands the Coral, the Rascals and the Little Flames are from Hoylake.

Joshua Armitage, pen-name "Ionicus" (1913–1998), the "Punch" artist and designer of covers for Penguin's editions of P.G. Wodehouse, was born in Hoylake and lived and worked there his whole life.