Interstate 579 (abbreviated I-579) is a north–south Interstate Highway entirely within Pittsburgh, Pennsylvania. The highway is 1.57 mi (2.53 km) long. I-579 is also known as the Crosstown Boulevard since it crosses the backside of Downtown Pittsburgh.

The northern terminus of I-579 is at Interstate 279 beyond the north end of the Veterans Bridge; the southern terminus splits to the Liberty Bridge southbound and Boulevard of the Allies eastbound, which leads to Interstate 376 East. The intersection of I-579 and I-279 is in one direction only; northbound traffic on I-579 can proceed only northbound on I-279, while only southbound traffic on I-279 can exit onto I-579.

I-579 allows Liberty Bridge traffic easy access to I-279, and I-279 southbound traffic easier access to Consol Energy Center, downtown, and eastern regions of the city, while I-279 southbound continues to Heinz Field, PNC Park, and to westbound I-376 which leads to the Pittsburgh International Airport. 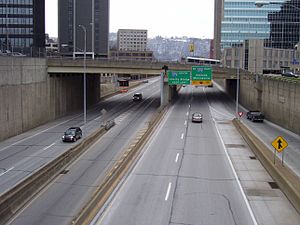 I-579 running through downtown Pittsburgh

I-579 begins at an interchange with PA 885 (Boulevard of the Allies) and the approach to the Liberty Bridge over the Monongahela River in Downtown Pittsburgh, heading to the north-northeast as a four-lane freeway. At the southern terminus, the highway has a northbound exit and southbound entrance providing access to 6th Avenue and Forbes Avenue near Duquesne University. The road passes several skyscrapers as it comes to an interchange at Centre Avenue with a northbound exit and southbound entrance that provides access to the Consol Energy Center. Immediately following is a left exit in the northbound direction and a southbound entrance that connects to 7th Avenue that serves the David L. Lawrence Convention Center. At this point, I-579 runs to the west of the former site of the Civic Arena and comes to the PA 380 interchange, a northbound exit and southbound entrance, in addition to a southbound exit and northbound entrance accessing 6th Avenue and 7th Avenue. The freeway turns north as it passes over railroad tracks to the east of Union Station, the Amtrak station serving Pittsburgh. Here, it is seven lanes total with three travel lanes in each direction and two reversible high-occupancy vehicle lanes in the center. The HOV lanes connect to Bedford Avenue near the Civic Arena at the south end. The highway turns northwest as it crosses the Allegheny River on the Veterans Bridge. A short distance after the bridge, I-579 ends at an interchange with I-279/US 19 Truck and PA 28, at which point the route merges into northbound I-279 with ramps to and from northbound PA 28.[2]

I-579's roots go back to 1966 when the short 0.7 mile Crosstown Boulevard from the Boulevard of the Allies (PA 885) to Bigelow Boulevard (PA 380) was designated as Interstate 479. Despite the choice of number, its parent I-79 was only completed in certain areas; there would be no connection of the two routes until 1989. By 1971, with only little progression of I-79 near I-479's northern terminus and easy (but indirect) access to then-I-76 (now I-376 Parkway East) from the southern terminus, I-479 was renumbered as Interstate 876. This was renumbered again the following year as its current designation of I-579; that same year, I-79's designation from Pittsburgh to Robinson Township was "swapped" with I-279's segment south of the Ohio River from PA 51 to the Parkway West interchange. In 1989, both of I-79's auxiliary routes were finally connected with the openings of I-279 (Parkway North) from the Fort Duquesne Bridge/North Shore to its northern terminus at I-79 in Franklin Park and the Veterans Bridge which extended I-579 across the Allegheny River to its new northern terminus at I-279 in Pittsburgh's East Allegheny neighborhood.

The entire route is in Pittsburgh, Allegheny County. All exits are unnumbered.