Jacquetta of Luxembourg, Countess Rivers (1415/16 – 30 May 1472) was the eldest daughter of Peter I of Luxembourg, Count of Saint-Pol, Conversano and Brienne, and his wife Margaret of Baux (Margherita del Balzo of Andria).[1] She was a prominent, though often overlooked, figure in the Wars of the Roses. Through her short-lived first marriage to the Duke of Bedford, brother of King Henry V, she was firmly allied to the House of Lancaster. However, following the emphatic Lancastrian defeat at the Battle of Towton, she and her second husband Richard Woodville sided closely with the House of York. Three years after the battle and the accession of Edward IV of England, Jacquetta's eldest daughter Elizabeth Woodville married him and became Queen consort of England. Jacquetta bore Woodville 14 children and stood trial on charges of witchcraft, of which she was exonerated.

The Luxembourgs claimed legendary descent from the water deity Melusine through their ancestor Siegfried of Luxembourg (c. 922 – 998).[4] Jacquetta was a fourth cousin twice removed of Sigismund of Luxembourg, the reigning Holy Roman Emperor and king of Bohemia and Hungary. 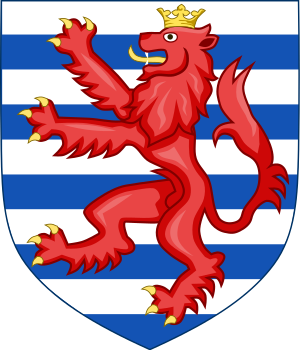 Most of Jacquetta's early life is a mystery. She was born as the Lancastrian phase of the Hundred Years War began. Her uncle, John II of Luxembourg, Count of Ligny, was the head of the military company that captured Joan of Arc. John held Joan prisoner at Beauvoir and later sold her to the English.

On 22 April 1433 at age 17, Jacquetta married John of Lancaster, 1st Duke of Bedford, at Thérouanne. The Duke was the third son of King Henry IV of England and Mary de Bohun, and thus the grandson of John of Gaunt, 1st Duke of Lancaster, himself the third son of King Edward III. The marriage was childless and the Duke died on 15 September 1435 at Rouen. As was customary at the time, after her second marriage Jacquetta retained the title of her first husband and was always known as the Duchess of Bedford, this being a higher title than that of countess. Jacquetta inherited one-third of the Duke's main estates as her widow's share.[5]

Sir Richard Woodville, son of Sir Richard Woodville who had served as the late Duke's chamberlain, was commissioned by Henry VI of England to bring Bedford's young widow to England. During the journey, the couple fell in love and married in secret (before 23 March 1437), without seeking the king's permission. Jacquetta had been granted dower lands following her first husband's death on condition that she not remarry without a royal licence. On learning of the marriage, Henry VI refused to see them, but was mollified by the payment of a fine of £1000. The marriage was long and very fruitful: Jacquetta and Richard had fourteen children, including the future Queen Consort Elizabeth Woodville. She lost her first-born son Lewis to a fever when he was 12 years old.

By the mid-1440s, the Woodvilles were in a powerful position. Jacquetta was related to both King Henry and Queen Margaret by marriage. Her sister, Isabelle de Saint Pol, married Margaret's uncle Charles du Maine while Jacquetta was the widow of Henry VI's uncle. She outranked all ladies at court with the exception of the queen. As a personal favourite, she also enjoyed special privileges and influence at court. Margaret influenced Henry to create her husband Baron Rivers in 1448, and he was a prominent partisan of the House of Lancaster as the Wars of the Roses began.[4]

The Yorkists crushed the Lancastrians at the Battle of Towton on 29 March 1461, and Edward IV, the first king from the House of York, took the throne. The husband of Jacquetta's oldest daughter Elizabeth, Sir John Grey, had been killed a month before at the Second Battle of St. Albans, a Lancastrian victory under the command of Margaret of Anjou. At Towton, however, the tables turned in favour of the Yorkists.

Edward IV met and soon married the widowed Elizabeth Woodville in secret; though the date is not accepted as exactly accurate, it is traditionally said to have taken place (with only Jacquetta and two ladies in attendance) at the Woodville family home in Northamptonshire on 1 May 1464.[6] Elizabeth was crowned queen on 26 May 1465. The marriage, once revealed, ruined the plans of Richard Neville, Earl of Warwick, Edward's cousin, who had been negotiating a much-needed alliance with France via a political marriage for Edward.

With Elizabeth now Queen of England, the Woodvilles rose to great prominence and power. Jacquetta's husband Richard was created Earl Rivers and appointed Lord High Treasurer in March 1466. Jacquetta found rich and influential spouses for her children and helped her grandchildren achieve high posts.[7] She arranged for her 20-year-old son, John, to marry the widowed and very rich Katherine Neville, Duchess of Norfolk, who was at least 45 years older than John. The rise of the Woodvilles created widespread hostility among the Yorkists, including Warwick and the king's brothers George and Richard, who were being displaced in the king's favour by the former Lancastrians.

In 1469, Warwick openly broke with Edward IV and temporarily deposed him. Earl Rivers and his son John were captured and executed by Warwick on 12 August at Kenilworth. Jacquetta survived her husband by three years and died in 1472, at about 56 years of age.

Shortly after her husband's execution by Warwick, Thomas Wake, a follower of Warwick's, accused Jacquetta of witchcraft. Wake brought to Warwick Castle a lead image "made like a man-of-arms . . . broken in the middle and made fast with a wire," and alleged that Jacquetta had fashioned it to use for witchcraft and sorcery. He claimed that the lead image had been found by "an honest person" Harry Kyngeston of Stoke Bruerne, Northamptonshire, in his house after the departure of soldiers, who delivered it to the parish clerk John Daunger of Shutlanger (in the parish of Stoke Bruerne). Daunger could allegedly attest that Jacquetta had made two other images, one for the king and one for the queen. The case fell apart when Warwick released Edward IV from custody, and Jacquetta was cleared by the king's great council of the charges on 21 February 1470.[8] In 1484 Richard III in the act known as Titulus Regius[9] revived the allegations of witchcraft against the dead Jacquetta when he claimed that she and Elizabeth had procured Elizabeth's marriage to Edward IV through witchcraft; however, Richard never offered any proof to support his assertions.

Through her daughter Elizabeth, Jacquetta was the maternal grandmother of Elizabeth of York, wife and queen of Henry VII, and therefore an ancestor of all subsequent English monarchs. 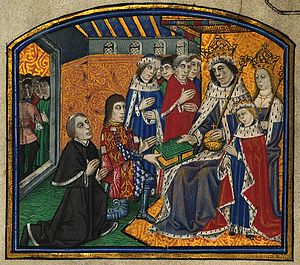 Two of Jacquetta's children are depicted here Anthony and Elizabeth.

The Visitation of Buckinghamshire of 1566 mentions the marriage of William Dormer of Wycombe (only later of Ascott House) to "Agnes, da. of Sir Richard Woodvyle, Erle Ryvers" but does not say whether the father was the first or the third earl, who the mother was or whether Agnes was legitimate.

Jacquetta is a main character in Philippa Gregory's 2009 novel The White Queen, a fictionalized account of the life of her eldest daughter Elizabeth.[11] In the novel, Jacquetta is portrayed as having indeed dabbled quite a bit in witchcraft, displaying what would seem to be actual power. She is also the main protagonist in Gregory's 2011 prequel novel The Lady of the Rivers.[12] Gregory's works explore the historical claim by Jacquetta's family that they were descended from the water deity Melusine. Gregory uses Jacquetta's tenuous ties to Melusine and Joan of Arc to further her potential ties to witchcraft. In the 2013 BBC One/Starz television series adaptation The White Queen, Jacquetta is portrayed by actress Janet McTeer.[13]

Jacquetta is also an important character in Margaret Frazer's fifth "Player Joliffe" novel, A Play of Treachery (2009). The story is set in 1435–6, after the death of her first husband, John, Duke of Bedford. This historical novel tells a tale regarding her marriage to Sir Richard Woodville. There is no mention of witchcraft in this novel.

Jacquetta is also a prominent character in The Last of the Barons (1843), a novel by Edward Bulwer-Lytton (1803–1873). The book's title is a reference to Richard Neville, Earl of Warwick.