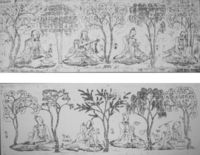 Seven Sages of the Bamboo Grove, an Eastern Jin tomb painting from Nanjing, now located in the Shaanxi Provincial Museum.

The Jin dynasty (Chinese: 晉朝; pinyin: Jìn cháo, IPA: [tɕîn tʂʰɑ̌ʊ]) was a Chinese dynasty lasting between the years AD 265 to 420. There are two main divisions in the history of the dynasty, the first being Western Jin (西晉, 265–316) and the second Eastern Jin (東晉, 317–420). Western Jin was founded by Sima Yan, with its capital at Luoyang, while Eastern Jin was begun by Sima Rui, with its capital at Jiankang. The two periods are also known as Liang Jin (兩晉; literally: two Jin) and Sima Jin (司馬晉) by scholars, to distinguish this dynasty from other dynasties that use the same Chinese character, such as the Later Jin dynasty (後晉).

The Sima clan was initially subordinate to the Wei dynasty, but the clan's influence and power grew greatly after the coup d'état in 249 known as the incident at Gaoping Tombs. In 263, Sima Zhao unified the lands of Shu and captured Liu Shan, which was followed a year later by Zhong Hui's Rebellion.

In 265, Sima Yan forced Emperor Cao Huan of Wei to abdicate the throne to him, ending Wei and founding the Jin. Sima Yan was enthroned as Emperor Wu of Jin. He named his dynasty after the state of Jin of the Spring and Autumn period that once ruled the Sima clan's home county of Wen in Henei (modern Wen County, Henan). In 280, the Jin conquered Eastern Wu and unified China, but internal conflicts, corruption and political turmoil quickly weakened the dynasty, and the unification lasted only ten years. Upon the advent of the second Jin emperor, Emperor Hui, various imperial princes tried to grab power in the devastating War of the Eight Princes. The Uprising of the Five Barbarians followed, during which large numbers of refugees fled south while the north was occupied by various nomadic groups. This marked the end of the Western Jin dynasty in 316 when the Jin court evacuated to the region south of the Huai River, and the beginning of the Eastern Jin and the Sixteen Kingdoms period.

Sima Rui founded the Eastern Jin at Jiankang in 317, with its territory stretching across most of today's southern China. The combination of the Eastern Jin and Sixteen Kingdoms period is sometimes called the "Eastern Jin Sixteen Kingdoms" (東晉十六國). During this period, huge numbers of people moved south from the central plain, stimulating the development of Southern China. The Emperors of Eastern Jin had limited power, owing to their dependence on the support of both local and refugee noble families which possessed military power. These families included the Wang family, including the chancellor Wang Dao, and the Xie family of Xie An and Xie Xuan. Many fangzhen (方鎮; literally: military county) started to have ambitions which resulted in military revolts, like the rebellions of Wang Dun, Su Jun, and the dictatorship of Huan Wen. Even though there was the stated goal of getting back the "northern lost lands", paranoia within the royal family and a constant string of disruptions to the throne caused the loss of support of many officials.

In 383, Former Qin mobilized its troops and intended to conquer Eastern Jin. Faced by the threat of invasion, many Jin officials cooperated hoping to repel the attack. After the battle of Fei river, Xie An, Xie Xuan, and other generals were able to push back the Qin's assault and seized back a huge amount of territory from their enemy. However, more internal political battles from different groups of officials followed Huan Xuan's usurpation of the throne. As civilian administration suffered, more revolts from Sun En, Lu Xun, and the declaration of a new kingdom called Western Shu by the militarist Qiao Zong in Eastern Jin's Shu region. Ultimately, Liu Yu's rise ended major chaos and later he took the throne for himself, marking the ending of the Jin dynasty and the start of the Liu Song dynasty, and the Northern and Southern dynasties period of Chinese history. 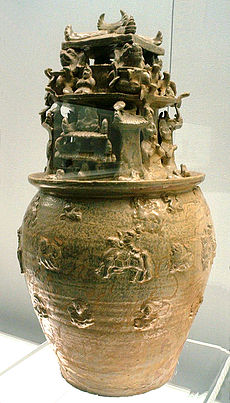 Hunping jar of the Western Jin, with Buddhist figures.

The Western Jin dynasty (西晉, 265–316) was founded by Emperor Wu, better known as Sima Yan. Although it provided a brief period of unity after conquering Eastern Wu in 280, the Jin suffered a devastating civil war, War of the Eight Princes, after which they could not contain the revolt of nomadic tribes known as the Wu Hu.

This Prince of Langye was proclaimed the Emperor Yuan of the Eastern Jin dynasty (東晉, 317–420) when news of the fall of Chang'an reached the south. (The rival Wu Hu states in the north, which did not recognize the legitimacy of Jin, would sometimes refer to it as "Langye".) 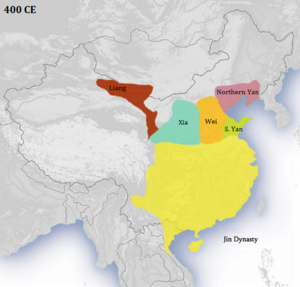 Military crises, such as the rebellions of generals Wang Dun and Su Jun, plagued the Eastern Jin throughout its 104 years of existence. However, the Battle of Fei River turned out to be a major Jin victory, due to the short-lived cooperation of Huan Chong, brother of a great general Huan Wen, and Prime Minister Xie An. Later, Huan Xuan, son of Huan Wen, usurped the throne and changed the dynasty's name to Chu. He, in turn, was toppled by Liu Yu, who after reinstating Emperor An, ordered him strangled and installed his brother, Emperor Gong, in 419.

Emperor Gong abdicated in 420 in favor of Liu Yu, ushering in the Liu Song dynasty the first of the Southern dynasties. The Jin Dynasty thus came to an end.

Meanwhile, North China was ruled by the Sixteen Kingdoms, many of which were founded by the Wu Hu. The last of these, Northern Liang, was conquered by the Northern Wei dynasty in 439, ushering in the Northern dynasties period. 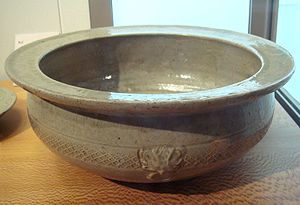 The Jin dynasty is well known for the quality of its greenish celadon porcelain wares, which immediately followed the development of proto-celadon. Jar designs often incorporated animal, as well as Buddhist, figures.[2]

Examples of Yue ware are also known from the Jin dynasty.[3]

Sima Fei (司馬朏) was a descendant of the Jin dynasty royalty who fled north to the Xianbei Northern Wei in exile and married the Xianbei Princess Huayang (華陽公主), the daughter of Emperor Xiaowen of Northern Wei.

The Song dynasty chancellor Sima Guang (1019–1086) was descended from the Jin Imperial family.